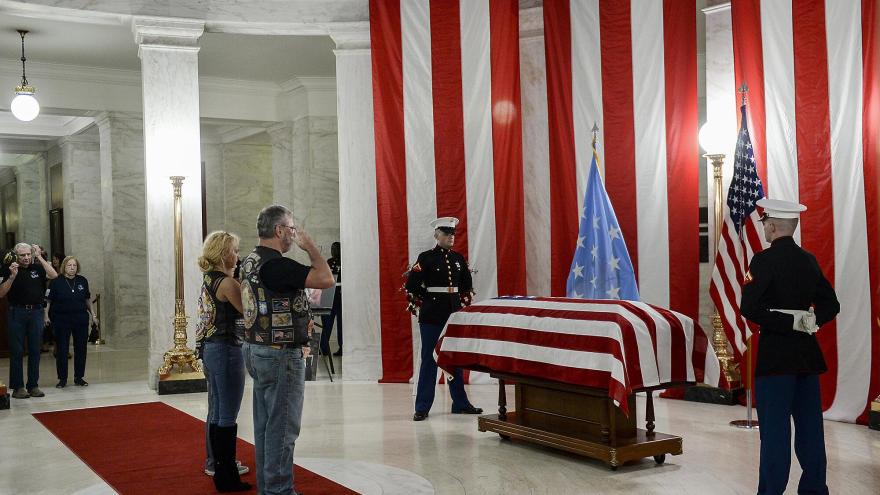 People salute the casket of Hershel "Woody" Williams set up in the first floor rotunda of the West Virginia State Capitol in Charleston, West Virginia, for visitation on Saturday, July 2.

The date and other details will be announced later, Pelosi and Schumer said in a joint statement.

"Woody Williams embodied the best of America: living a life of duty, honor and courage," said Pelosi, a California Democrat.

Schumer, a New York Democrat, called Williams "an American hero who embodied the best of our country and the greatest generation."

Williams, who died Wednesday at the age of 98, was awarded the Medal of Honor after serving in the Battle of Iwo Jima and displaying "valiant devotion to duty." President Harry Truman presented Williams with the honor in a ceremony at the White House on October 5, 1945.

The Medal of Honor is the United States' highest award for military valor.

At a Sunday memorial service in Williams' native West Virginia, Sen. Joe Manchin announced he received a call that morning informing him that Williams would be memorialized in the US Capitol Rotunda.

Manchin, a Democrat from the state, praised Williams as someone who "never quit giving back" by raising money for Gold Star Families with an annual motorcycle ride.

"It's raised hundreds of thousands of dollars," Manchin said Sunday, adding, "It's not going to be stopping, because Woody would come after me in a heartbeat."

Manchin said he will miss Williams' phone calls, joking how Williams would give him directions on how to do his job.

"I'll miss him telling me how I'm supposed to vote. And when I didn't, how I made a mistake," Manchin said.