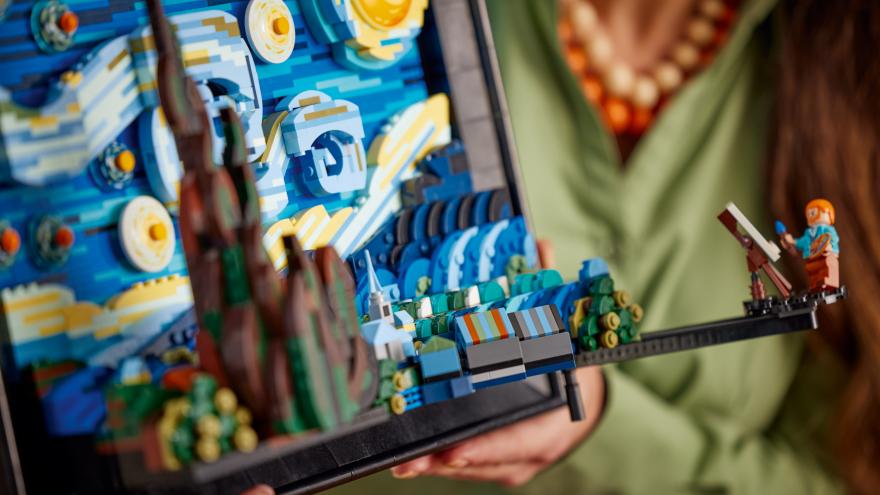 (CNN) -- When New York's Museum of Modern Art (MoMA) bought "The Starry Night" from a private collector in 1941, the painting was not well known.

In the 81 years since, Vincent van Gogh's masterpiece has gone on to inspire everything from a hit single for singer Don McLean in 1971 to mass-produced merchandise including scarves, umbrellas and water bottles.

Now LEGO is getting in on the act, as it invites fans to reproduce the Dutch painter's brush strokes -- in brick form.

The 2,316-brick set, which is aimed at adults and will retail at $169.99, was designed by Truman Cheng, a 25-year old from Hong Kong, through a submission on the LEGO Ideas platform, which takes designs dreamed up by fans, puts them to a public vote and turns them into reality. Other winning ideas to emerge from the platform include a working typewriter, the house from the movie "Home Alone" and a scene from "Seinfeld."

Van Gogh was inspired to paint "The Starry Night" by the view from his window at the Monastery of Saint-Paul de Mausole psychiatric hospital in Saint-Rémy, France, where the he spent 12 months between 1889 and 1890 -- the year of his death.

PhD student Cheng said his inspiration was born out of playing around with LEGO and noticing that when he arranged the bricks at random intervals they resembled Van Gogh's distinctive brush strokes.

In a statement released by LEGO on its website, he said: "It was a was a good brain tease to come up with tricks and techniques to capture the look of the original painting.

"The brushwork goes into many directions in the moon and the swirling cloud, so there was some creative use of bracket and clip elements involved."

Sarah Suzuki, associate director of MoMA, said in the statement: "At MoMA, we celebrate the opportunity to connect art and audiences, and are thrilled to be part of a new way to experience van Gogh's work, and to inspire the creative impulse in people of all ages."

Talking of the decision to turn the design into a LEGO set, Federico Begher, head of global marketing at the toy company, said: "Truman's design was a masterpiece in itself -- showing how many different LEGO elements and techniques could be used to replicate van Gogh's iconic painting."

In conjunction with the release, LEGO has launched a competition for fans to submit their own mini-builds inspired by the night sky. Winning designs will form part of an installation displayed in the lobby at MoMA this summer.

The set will initially be available to members of MoMA and LEGO VIPs from May 25, before going on general sale a week later.