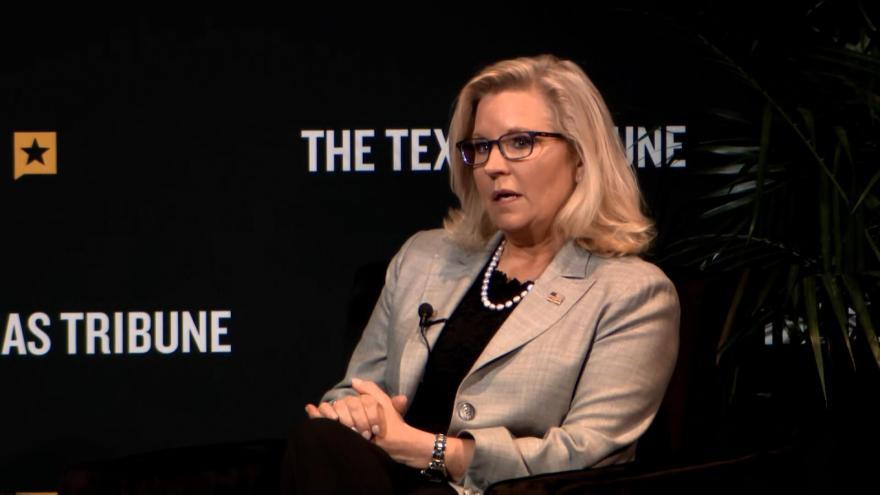 GOP Rep. Liz Cheney said that if former President Donald Trump becomes the Republican Party's nominee for president in 2024, she will not remain a Republican.

(CNN) -- Wyoming GOP Rep. Liz Cheney said at The Texas Tribune festival Saturday that if former President Donald Trump becomes the Republican Party's nominee for president in 2024, she will not remain a Republican.

Cheney also said she will campaign for Democrats to ensure that Republican candidates who promote election lies do not get elected.

Cheney was talking about the Arizona gubernatorial race, and how she will work to ensure that GOP nominee Kari Lake, the former television journalist who has become a leading voice behind Trump's lies about election fraud, does not get elected.

"I'm going to do everything I can to make sure Kari Lake is not elected," Cheney said.

When asked if that includes campaigning for Democrats, Cheney said, "Yes."

But, Cheney would not go as far as saying that she wants Democrats to keep control of the House of Representatives after the midterm elections.

Cheney said there are a lot of "bad policies" in the Biden administration but added, "I think it's really important though, as voters are going to vote, that they recognize and understand what the Republican Conference consists of in the House of Representatives today."

Cheney's primary loss against Trump-backed attorney Harriet Hageman last month represented a significant marker in the wider fight over the direction of the Republican Party. Once considered an up-and-comer, Cheney was booted from House GOP leadership last year over her unyielding opposition to the former President. She trailed in polling back home this year as she helped lead the House select committee investigating the January 6, 2021, attack on the US Capitol.

But as questions about her future political moves loom, Cheney continued to dodge the question of whether she will run for President in 2024.

"It's not about me or making a decision about what I'm going to do," she said. "I certainly will do whatever it takes to make sure Donald Trump isn't anywhere close to the Oval Office."

Cheney's advisers previously told CNN she intends to wait until next year to make any decisions, when she's no longer in Congress or serving as vice chair of the House January 6 committee. She is cognizant of appearing to politicize the findings of the committee.

However, her role on the select committee comes with the kind of spotlight that other Republican Trump critics have struggled to find. Cheney would confront the same challenge when she departs office in January, and a presidential candidacy could be the only way to address it.

On whether the House January 6 committee, which will hold its next hearing next week, will speak with Trump before its investigation concludes, Cheney said, "Let me say that any interaction that Donald Trump has with the committee will be under oath and subject to penalties of perjury."

And on where talks stand between the committee and the legal counsel for former Vice President Mike Pence stand, Cheney said she believes Pence has an "obligation" to speak with the committee. While she respects executive privilege, she believes that type of privilege is "not absolute."

Cheney said the committee has not made a decision on whether to make a criminal referral to the Department of Justice based on the panel's investigation, but when the time does come to make that decision, she believes it will be "unanimous."

But she did share that the committee has received approximately 800,000 pages from the Secret Service in response to a subpoena and reiterated that the documents contain a lot of new information.

Cheney was also asked to share a memorable moment with her father, former Vice President Dick Cheney, since the Capitol attack and she shared that on New Year's Day of this year, as she was leaving his house, he said to her, "defend the republic, daughter" and she said it was a moment she will never forget.