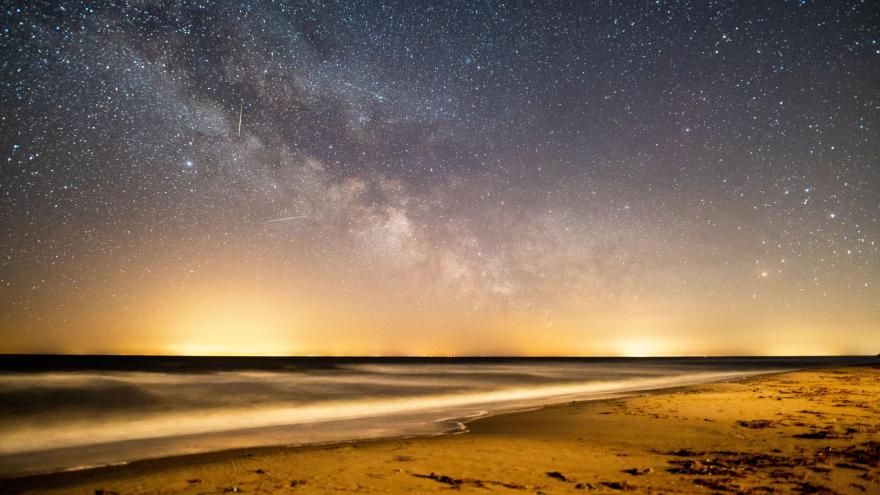 (CNN) -- Every year from January to mid-April, we experience a "meteor drought," without a single shower for months.

That all ends April 22 this year with the first show of the season: the annual Lyrid meteor shower.

"These dazzling meteors are fast and bright, with a striking golden trail of dust streaking behind them," CNN meteorologist Judson Jones said.

The Lyrids, which are best seen from the Northern Hemisphere, have been observed for 2,700 years, according to NASA. During its peak, this shower will feature about 10 meteors per hour.

You might even spot a fireball flying across the sky or the glowing dust trail the meteors frequently leave behind them as they streak through Earth's atmosphere.

As with all meteor showers, the darker the sky, the more visible the Lyrids will be. If you want to view them, you'll have your best luck away from urban areas where city lights can obstruct the view.

"Light pollution is one of the biggest struggles when trying to see meteors, and it seems to be getting worse each year," Jones said.

But there is one other factor that impacts light as well: the moon. This year, the moon will be in its waxing gibbous phase; it will be about 70% illuminated. Since the moon will be so bright, it's suggested you view the sky after moonset and before sunrise, according to EarthSky.

Between midnight and dawn, the Lyrid meteors can be seen in all parts of the sky, according to the American Meteor Society. The best time for viewing them April 22 will be the last hour before the start of morning twilight: around 4-5 a.m. local Daylight Saving Time.

After you've decided on your viewing location and time, come prepared with a blanket and simply lie back, with your feet facing east, and look toward the sky. Take 30 minutes beforehand to let your eyes adjust to the dark, without looking at your phone.

Be patient, as the AMS suggests: "Serious observers should watch for at least an hour as numerous peaks and valleys of activity will occur."

If your eye catches a meteor in the sky, you'll be observing one of the lost pieces of Comet Thatcher, the source of the Lyrid meteors. These fragments fly into our upper atmosphere at 110,000 miles per hour as Earth's orbit crosses its path.

"When these pieces interact with our atmosphere, they burn up to reveal the fiery, colorful streaks you can find in our night sky," Jones said.

If you miss the meteors this week but still want to gaze at the sky, see next week's "pink" full supermoon on April 26. While the moon won't actually be pink, it will appear extra bright since supermoons are slightly closer to Earth.

Here is what else you can look forward to in 2021.

You don't have long to wait after the Lyrids meteor shower for the Eta Aquariids to arrive, peaking on May 5 when the moon is 38% full. This shower is best seen in the southern tropics, but will still produce a medium shower for those north of the equator.

The Delta Aquariids are also best seen from the southern tropics and will peak between July 28 and 29 when the moon is 74% full.

Interestingly, another meteor shower peaks on the same night -- the Alpha Capricornids. Although this is a much weaker shower, it has been known to produce some bright fireballs during the peak. It will be visible for those on either side of the equator.

The Perseid meteor shower, the most popular of the year, will peak between August 11 and 12 in the Northern Hemisphere, when the moon is only 13% full.

An annular eclipse of the sun will happen on June 10, visible in northern and northeastern North America from 4:12 a.m. ET to 9:11 a.m. ET. The sun won't be fully blocked by the moon, so be sure to wear eclipse glasses to safely view this event.

November 19 will see a partial eclipse of the moon, and skywatchers in North America and Hawaii can view it between 1 a.m. ET and 7:06 a.m. ET.

And the year ends with a total eclipse of the sun on December 4. It won't be seen in North America, but those in the Falkland Islands, the southern tip of Africa, Antarctica and southeastern Australia will be able to spot it.

Skywatchers will have multiple opportunities to spot the planets in our sky during certain mornings and evenings throughout 2021, according to the Farmer's Almanac planetary guide.

It's possible to see most of these with the naked eye, with the exception of distant Neptune, but binoculars or a telescope will provide the best view.

Venus, our closest neighbor in the solar system, will appear in the western sky at dusk on the evenings of May 24 to December 31. It's the second brightest object in our sky after the moon.

Jupiter, the largest planet in our solar system, is the third brightest object in our sky. It will be on display in the morning sky between February 17 and August 19. Look for it in the evenings of August 20 to December 31 -- but it will be at its brightest from August 8 to September 2.

Saturn's rings are only visible through a telescope, but the planet itself can still be seen with the naked eye on the mornings of February 10 to August 1 and the evenings of August 2 to December 31. It will be at its brightest between August 1 to 4.

Binoculars or a telescope will help you spot the greenish glow of Uranus on the mornings of May 16 to November 3 and the evenings of January 1 to April 12 and November 4 to December 31 -- but at its brightest between August 28 to December 31.

And our most distant neighbor in the solar system, Neptune will be visible through a telescope on the mornings of March 27 to September 13 and the evenings of September 14 to December 31. It will be at its brightest between July 19 and November 8.