Mandates are boosting vaccination rates, but not without a tradeoff 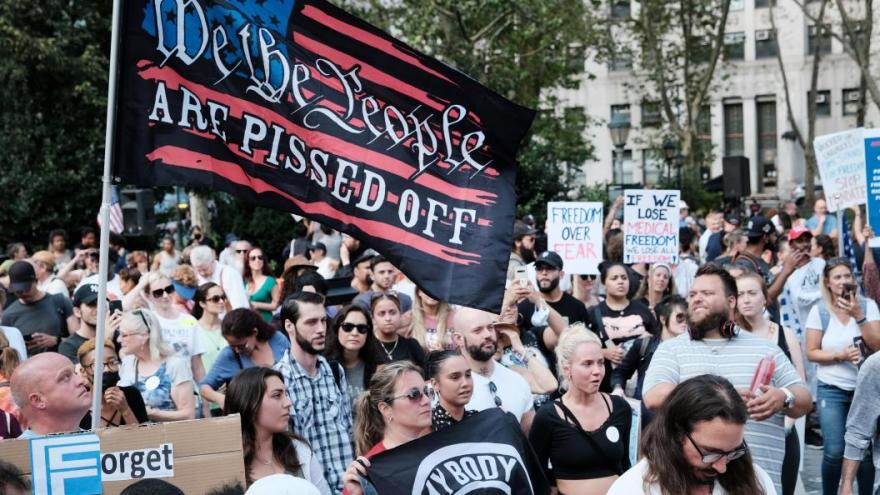 People participate in a rally and march against Covid-19 mandates on September 13, 2021, in New York City.

(CNN) -- Mandates that require employees to be vaccinated against Covid-19 have spurred workers to get vaccinated in recent weeks -- yet some holdouts have been suspended or lost their jobs, and workplaces are scrambling to cover potential shortages.

The tradeoff -- a disrupted workplace in the short term in exchange for widespread protection against Covid -- has been particularly evident in New York, which instituted a vaccine mandate for health care workers starting Monday.

"This new information shows that holding firm on the vaccine mandate for health care workers is simply the right thing to do to protect our vulnerable family members and loved ones from COVID-19," she said.

He encouraged private businesses to institute similar requirements and said the mandates had proven to be "strikingly effective" in pushing people to get vaccinated.

"In the end, when it comes down to it you have to choose: Are you going to be able to keep that job, keep that paycheck, do the right thing, get vaccinated? The vast majority of people choose to get vaccinated," he said.

He acknowledged the mandate may have made some employees mad, but said the tradeoff was worth it.

"I know that there are United Airlines employees who got vaccinated because of this, who will be alive a year from now, who would not be had we not done this. ... And that means far more to me than the small minority of the fewer than 1% that chose to leave," he said.

"They work," Gupta said of mandates. "It's tough that some people lose their jobs over this, but those numbers sort of speak for themselves."

Some disruptions are expected

The mandates, though, have also caused staffing issues at several New York hospitals.

No health care facilities closed due to the mandate, but the Erie County Medical Center had to suspend elective inpatient procedures due to worker shortages. At the system's Terrace View Long-Term Care facility, over 20% of employees were unvaccinated and so suspended without pay.

St Joseph's Health in Syracuse, too, suspended 122 employees who were not vaccinated, and the hospital said that some services may be paused due to the worker shortage.

"We are examining all our options to help ease the burden this may put on our staff, including pausing some services, consolidating our (operating rooms) and adjusting elective surgeries," marketing and communications director Jamie Arnold said Wednesday.

The suspended employees have until October 8 to get vaccinated "or face separation," said Arnold. As of Tuesday, nearly 97% of the health care system's 3,810 employees were compliant with the vaccine mandate.

Other hospitals said patient care has not been compromised in light of the staffing losses, though several have had to adjust worker schedules.

"Patient care has not been compromised at all," said Clark. "Schedules have been created accordingly. People will work overtime, or part-timers or agency personnel will be brought in when necessary. We believe that when all is said on Monday morning -- when the 'grace period' ends -- that the number of terminations will be relatively small."

Katz noted that since many employees do not work a normal Monday through Friday schedule, many workers within the hospital system still have time to get vaccinated before their first work shift this week. He said he also expects more workers to get vaccinated once they realize they won't be getting their paychecks.

About 500 temporary nurses are ready to fill vacancies as needed, he said.

Teachers and educators up next

New York City has also mandated that public school employees, including teachers, be vaccinated by Friday after the policy cleared a lawsuit.

Those who do not get vaccinated, though, will be put on leave and could ultimately be let go if they continue to refuse. That has led to concerns about a shortage of teachers at a precarious time for the education system.

If a significant number of teachers are pushed out, the mayor said that substitute teachers and "a lot of young people who want to go into the teaching profession," who are ready and vaccinated, will take on those roles.

However, two prominent local unions, United Federation of Teachers (UFT) and the Council of School Supervisors and Administrators (CSA), warned that the city would face serious shortages if unvaccinated staff are kept out of schools.

"The truth is, at this point, principals and superintendents have been reaching out consistently to tell us that they are concerned about not having enough staff come Tuesday morning," CSA president Mark Cannizzaro said last week.

For his part, de Blasio said he would not require vaccines for children in schools, saying it was more important to get children into schools after Covid-19 kept people remote for so long.

"If a parent says I'm not gonna get my kid vaccinated, I don't want to penalize the kid," he said.