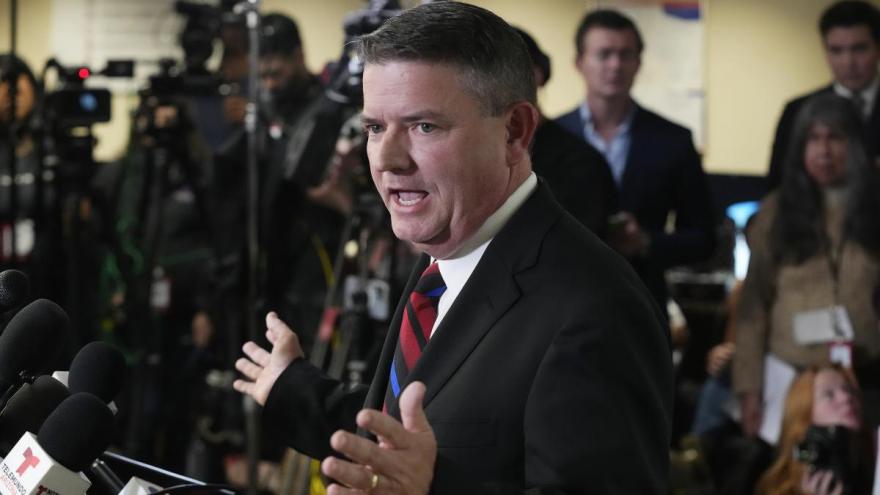 The chairman of Maricopa County’s Board of Supervisors, Bill Gates, pictured here, in Phoenix, on Nov. 10 pushed back on allegations of misconduct from Arizona Republican senatorial candidate Blake Masters, the Republican National Committee and the Republican Party of Arizona.

(CNN) -- The chairman of Maricopa County's Board of Supervisors, Bill Gates, pushed back on allegations of misconduct from Arizona Republican senatorial candidate Blake Masters, the Republican National Committee and the Republican Party of Arizona on Friday night.

"The suggestion by the Republican National Committee that there is something untoward going on here in Maricopa County is absolutely false and again, is offensive to these good elections workers," he said.

On Friday night, the RNC and the Republican Party of Arizona tweeted a statement criticizing the process in Maricopa County and demanding that the county require "around-the-clock shifts of ballot processing" until all of the votes are counted, along with "regular, accurate public updates."

The RNC and state party also threatened that they would "not hesitate to take legal action if necessary."

Addressing the specific accusations from the RNC statement, Gates said, "I would prefer that if there are concerns that they have, that they communicate those to us here. I'm a Republican. Three of my colleagues on the board are Republicans. Raise these issues with us and discuss them with us, as opposed to making these baseless claims."

"They're hyping up the rhetoric here, which is exactly what we don't need to do," Gates said.

"Let the count continue on and at the end, if they have issues they choose to take to court, they have every right to do that, and we'll let that process play through," Gates added.

Responding to claims that the count is "taking too long," Gates said the county's pace is in line with previous years.

"Over the past couple of decades, on average it takes 10 to 12 days to complete the count. That's not because of anything Maricopa County has decided to do, that's because of how Arizona law is set up. And that's what we do here at Maricopa County, we follow the law to make sure that the count is accurate."

Additionally, Gates responded to an assertion from Masters that the county had mixed up uncounted ballots with counted ballots and should "wipe the slate clean" and start counting all over again.

In an interview Friday with Fox News' Tucker Carlson, Masters said that on "at least two occasions," the county mixed up uncounted ballots placed in a secure drop box after they were not able to be processed on site because of technical glitches, with ballots that had already been counted.

"So, people when they got to a machine and the machine didn't work, they were invited to just drop their ballot in a secure box. Hey, we'll count this later. Well, it turns out Maricopa County on at least two occasions mixed up those uncounted ballots with ballots that had already been counted. So, it's a giant disaster. It's a giant mess to try to unmix these ballots. Right. I think the most honest thing at this point would be for Maricopa County to wipe the slate clean, just take all the ballots and do a fresh count," Masters said.

Gates said that there were two vote centers where ballots "co-mingled" -- but said that the county has a process to separate them out.

"There were two vote centers where the ballots that went into box three were actually co-mingled with the ballots that went through the tabulator. Now here is the thing, we can absolutely address this and we will. In those two instances we know exactly how many people checked in at that vote center. We can then check the total number of ballots that were left there, either tabulated or in box three, and determine if they're the same. We can segregate those out and make a determination and best thing of all is that we will do this with a Republican and Democrat observers watching this to make sure everything that checks out," he said.

And addressing the suggestion from Masters that the county should wipe the slate clean and start counting over again, Gates said that "is simply not allowed for under Arizona law."

An estimated 275,000 ballots are left to count in Maricopa County, according to Gates. He expects that if they continue counting at the same pace -- around 60,000 to 80,000 ballots a day -- they should be done counting by "very early next week."