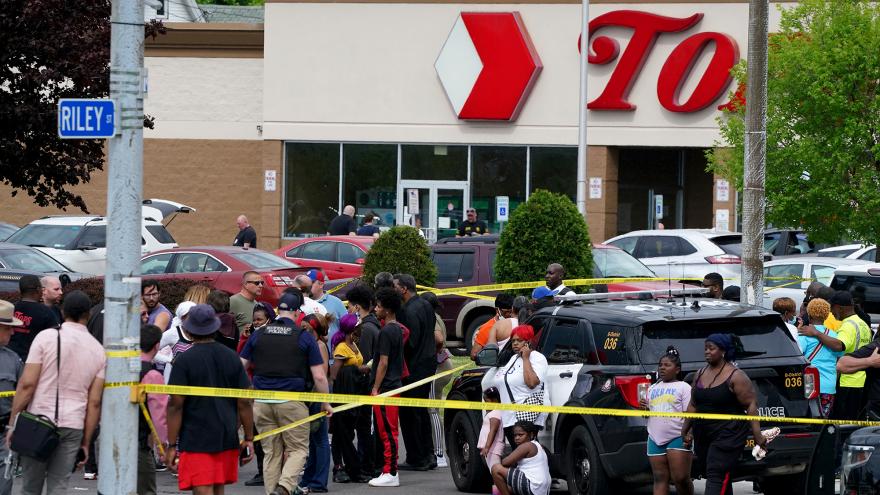 (CNN) -- The 18-year-old suspected of opening fire at a Buffalo supermarket Saturday told authorities he was targeting the Black community, according to an official familiar with the investigation.

The alleged gunman made very disturbing statements describing his motive and state of mind following his arrest, the official said. The statements were clear and filled with hate toward the Black community. Investigators also uncovered other information from search warrants and other methods indicating the alleged shooter was "studying" previous hate attacks and shootings, the official said.

The revelation comes a day after a gunman killed 10 people and wounded three others at the Tops Friendly Markets store in a predominantly Black neighborhood in Buffalo. Eleven of the people who were shot were Black, officials said.

The suspect was identified as a rifle-toting 18-year-old from Conklin, New York, who allegedly wrote a White supremacist manifesto online, traveled about 200 miles to the store and livestreamed the attack, authorities said.

Buffalo Police Commissioner Joseph Gramaglia said Sunday the attack was a racist hate crime and will be prosecuted as such.

"The evidence that we have uncovered so far makes no mistake that this is an absolute racist hate crime. It will be prosecuted as a hate crime," he said. "This is someone who has hate in their heart, soul and mind."

Investigators believe the suspect acted on his own in the shooting, Gramaglia said. The suspect was in Buffalo a day before the shooting and did some reconnaissance at the Tops Friendly Markets store, the commissioner said.

The attack bears similarities to a number of mass shootings in recent years that were motivated by hate and intended to be seen online, including the shootings at two mosques in Christchurch, New Zealand, in 2019.

The Buffalo attack was the deadliest US mass shooting of the year. There have been at least 198 mass shootings so far in 2022, per the Gun Violence Archive, which like CNN defines a mass shooting as four or more people shot, not including the shooter.

Investigators are reviewing a 180-page purported manifesto posted online in connection with the shooting, two federal law enforcement sources told CNN. The author of the document, who claims to be Payton Gendron, confesses to the attack and describes himself as a fascist, a White supremacist and an anti-Semite.

The manifesto's author says he bought ammo for some time but didn't get serious about planning the attack until January.

The author writes about his perceptions of the dwindling size of the White population and claims White people are being replaced by non-Whites in a "White genocide." This "replacement theory," once a fringe idea, has recently become a talking point for Fox News' host Tucker Carlson as well as other prominent conservatives.

"We continue to investigate this case as a hate crime, a federal hate crime and as a crime perpetrated by a racially motivated, violent extremist," said Stephen Belongia, special agent in charge of the FBI's Buffalo field office.

In the manifesto, the author says the supermarket in Buffalo is in a ZIP code that "has the highest black percentage that is close enough to where I live."

"This was targeted by ZIP code," Hochul said. "This was the highest concentration of African Americans within hours."

The ZIP code that includes the store, 14208, is 78% Black, according to the US Census Bureau's 2020 American Community Survey. That is the highest percentage of Black population of any ZIP code in upstate New York.

Hochul said an AR-15 used in the shooting was purchased legally in a gun store in New York state but was modified with a high-capacity magazine, which is not legal in the state.

The suspected gunman had previously been on the radar of police, officials said.

As a student at Susquehanna Valley Central High School, he made a "generalized threat" in June 2021, Gramaglia said. The student was brought in for a mental health evaluation and was released after a day and a half, according to Gramaglia. The threat was not racially motivated, he added.

A spokesman for the New York State Police confirmed to CNN it investigated and responded to a report that a 17-year-old student had made "a threatening statement" in June 2021 at the same high school. The student was taken into custody and transported to a hospital in June 2021 for a mental health evaluation.

State police were unable to confirm how long the individual was in the hospital or the findings of the evaluation. They also refused to name the 17-year-old.

Earlier Sunday, Hochul said on ABC's "This Week" the suspect had previously been under surveillance with medical authorities related to "something he wrote in high school."

In his hometown, the suspect worked at the local Conklin Reliable Market for about four months and left about three months ago, according to the store's owner. The owner described him as very quiet, while a neighbor similarly said "you wouldn't get more than a word or two" from him.

How the shooting unfolded

At around 2:30 p.m., the suspect drove to Tops Friendly Markets near the areas of Masten Park and Kingsley. Wearing tactical gear and armed with an assault weapon, the suspect allegedly shot and killed three people in the parking lot and wounded a fourth, according to a statement from Erie County District Attorney John J. Flynn.

The suspect then entered the store and exchanged gunfire with an armed security guard who was a retired member of the Buffalo Police Department, the district attorney said. The guard was identified as Aaron Salter, Brown said.

Because the suspect wore heavy tactical gear, however, the guard's bullets did not have any effect, Buffalo Police Commissioner Joseph Gramaglia said Saturday.

"He was very heavily armed," the police commissioner said. "He had tactical gear, he had a tactical helmet on, he had a camera that he was livestreaming what he was doing."

Inside the store, nine people were shot before the suspect was apprehended by police, according to the district attorney's statement.

In a statement sent to CNN, livestreaming service Twitch confirmed the shooting was streamed and said the user "has been indefinitely suspended from our service, and we are taking all appropriate action, including monitoring for any accounts rebroadcasting this content."

CNN obtained a portion of the livestream which showed the suspect arriving at the supermarket in his vehicle. CNN is not airing the video.

Grady Lewis said he was outside the supermarket when he heard seven or eight gunshots and saw a White man dressed in tactical gear spraying gunfire at the entry of the store. Law enforcement arrived within two minutes after the shooting began, Lewis told CNN affiliate WKBW. He "heard at least 20 or so shots" before the suspect exited the store.

"He came out, he put the gun to his head, to his chin. Then he dropped it and took off his bulletproof vest, then got on his hands and knees and put his hands behind his back," Lewis said, describing the moments the suspect was arrested by police. "I thought they were going to shoot him but they didn't shoot him."

"I still don't even believe it happened ... that a person would go into a supermarket full of people," he said. "It was horrible, it was really horrible."

The Tops Friendly Markets store released a statement Sunday saying it was heartbroken over the violence. "Tops has been committed to this community and to the city of Buffalo for decades and this tragedy will not change that commitment," the company said.