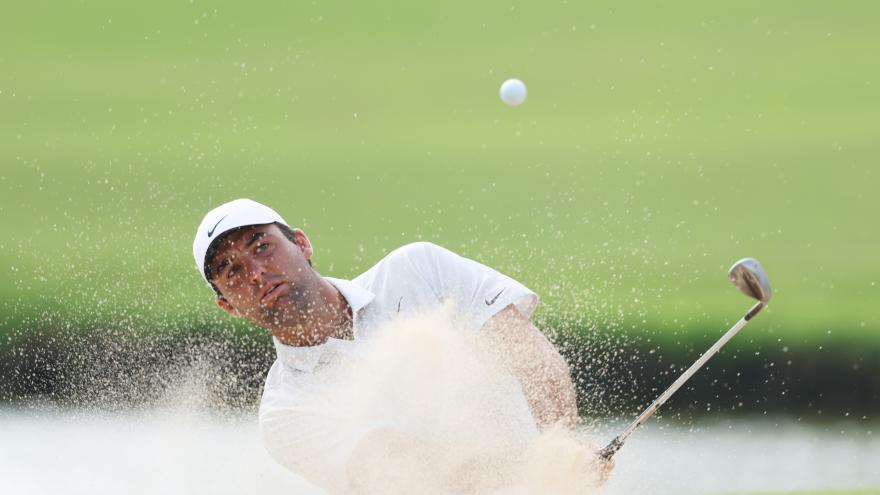 (CNN) -- It looks like Masters champion Scottie Scheffler will miss the cut at the 2022 PGA Championship after a stuttering performance.

Coming off a disappointing opening round Thursday -- which included a rare show of frustration from the usually unflappable Scheffler -- the world No. 1 entered Friday's second round one over par, six shots behind leader Rory McIlroy.

And with the aim surely to climb back up the leaderboard, Scheffler showed some of his trademark grit and grind, clearly not playing his best but managing to eke out nine pars in a row on his first nine holes at Southern Hills Country Club in Tulsa, Oklahoma.

However, it was on the back nine when things started to go pear-shaped for arguably the most in-form golfer in the world.

Consecutive bogeys on the first and second holes -- his 10th and 11th -- meant the 25-year-old was always playing catch-up; but it only got worse from there.

A birdie on his 13th gave Scheffler some hope, only for two bogeys in the next three holes to really cement a torrid afternoon in Tulsa for Scheffler.

And just when things seemed like they couldn't get any worse, he had the nightmare final hole.

On the par four ninth hole, his tee shot landed in a bunker on the right of the fairway, and the resulting bunker shot landed just off the left of the green.

His chip shot was a tad under-hit, landing just on the edge of the green and leaving him a 15-foot putt for par.

Needing to hole it to have an outside shot of playing on the weekend, Scheffler's putt rolled just to the left of the hole, leaving him a tricky putt to rescue a bogey.

And it just wasn't Scheffler's day, as the bogey putt once again just missed the hole, as he tapped in for a double-bogey, completing his back nine in 40 strokes.

Scheffler finished with a five-over 75 and six over for the tournament. With the projected cut at four over, unless there was a considerable run of high scores, Scheffler won't be playing on Saturday and Sunday.

It's the first time this year Scheffler has carded consecutive rounds over par.

According to golf stats expert Justin Ray, since the world ranking system was introduced in 1986, the world No. 1 has missed the cut at the PGA Championship just twice: Seve Ballesteros in 1986 and Dustin Johnson in 2021.