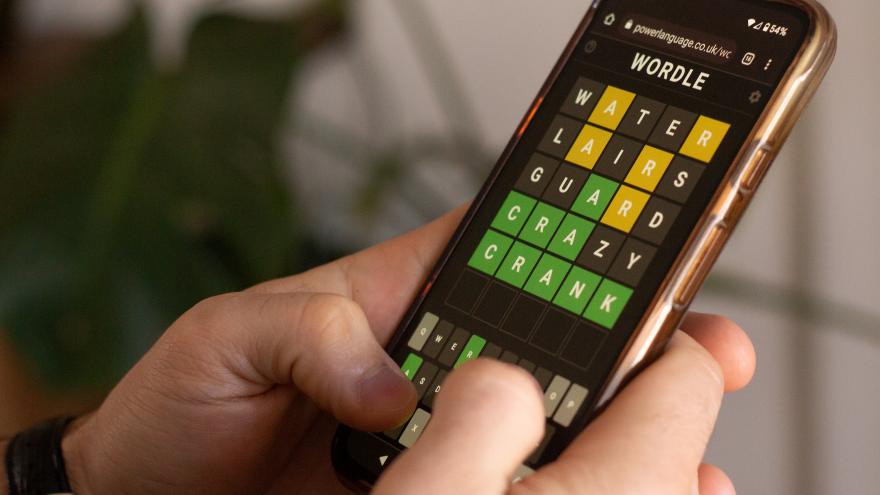 (CNN) -- Wonder what those green and yellow tiles all over your social media feeds are? It's Wordle, a new no-frills word game that has charmed the internet.

Think of it as Mastermind, but with words instead of colored pegs. Or a mini crossword without clues. You start by choosing any five-letter word and typing it out into the grid. Any incorrect letter pops up in grey. Correct letters turn yellow, and if the letter is also in the right spot it turns green. Users have six tries to guess the word — that's it — the fewer tries, the better. Kinda like golf.

In the midst of a chaotic, polarized news cycle, a simple word game may be just what the internet needs.

Even the story behind the game is intriguing. The New York Times reported it was created by software engineerJosh Wardle for his partner, who loves word games. Wardle -- yes, even the game's name is a play on words -- eventually took his side project to the public in October after its popularity on a family groupchat. It's since grown from 90 players to 300,000 as of last Sunday.

"It's something that encourages you to spend three minutes a day," he said in an interview with the Times. "It doesn't want any more of your time than that."

Deepak Venkatasubramanian of Charlotte, N.C., checks Wordle like the morning paper. It is refreshing to have a sense of routine during a pandemic and in a society with an oversaturation of information, he said. He played a similar word game on family road trips growing up, and now he plays Wordle in a group chat with his friends to keep in touch. His group of recent college graduates even made an Excel sheet to keep tally of scores.

"We have a culture of being able to access everything at once," Venkatasubramanian said. "It's like waiting for an episode of your favorite television show to drop."

The game, a simple enough combination of logic and sheer luck, is blowing up on social media and group chats alike, after Wardle created an easy way to share results by allowing users to copy and paste their colored squares without giving away the word. Thousands of people post their scores every day on Twitter, revealing how many, or how few, tries it took them to solve the puzzle and in what order.

For many, it's become part of their daily routine. Wardle posts a new game every 24 hours on a website he created. There are no frills. Also, no pop-up ads, no pesky login information, no cash grabs.

"I don't understand why something can't just be fun. I don't have to charge people money for this and ideally would like to keep it that way," Wardle said in an interview Wednesday with BBC Radio 4.