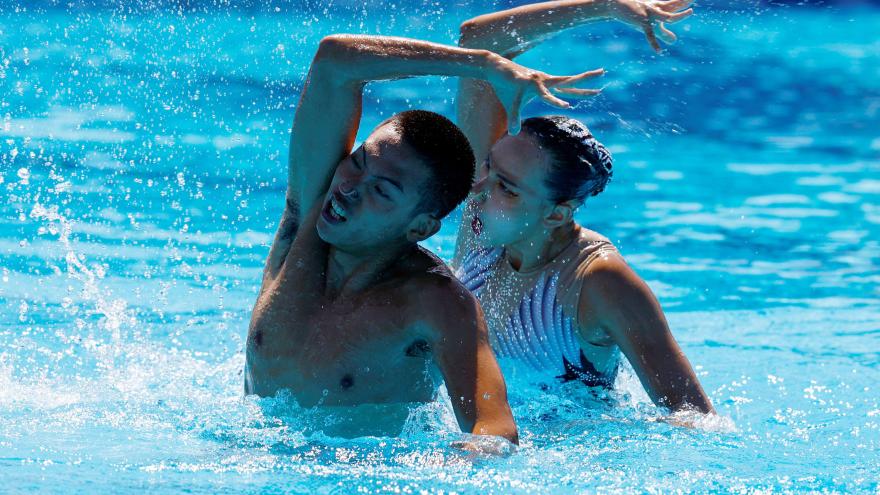 (CNN) -- Male athletes will be allowed to compete in Olympic Artistic Swimming events for the first time at the Paris 2024 Olympic Games, the aquatic sports' global governing body FINA said on Thursday.

The news comes after the International Olympic Committee approved World Aquatics' request to permit the inclusion of men at the Games. Artistic Swimming was known as Synchronized Swimming until 2017.

At the Paris Olympics, men will be permitted in the team Artistic Swimming event. Each team is made up of eight athletes, with a maximum of two men allowed per team.

"This is a day of celebration for those who have campaigned for the inclusion of men in the sport at the Olympic Games and who have pioneered men's participation," said FINA in a statement.

Men have been allowed to compete in the sport at the World Aquatics Championships since 2015.

"Aquatics sports are universal and men have proven themselves to be excellent artistic swimmers," World Aquatics President Husain Al-Musallam said of the rule change.

"I look forward to seeing this new dimension of artistic swimming being shared with the world in Paris. The inclusion of men in artistic swimming is a great credit to all those who have worked for many years to make this happen."

American athlete Bill May, who became the inaugural winner of the mixed duet technical event alongside Christina Jones in 2015, hailed the landmark announcement.

"The inclusion of men in Olympic Artistic Swimming was once considered the impossible dream," May said.

"This proves that we should all dream big. The male athletes have endured. Now, through their perseverance and the help and support of so many, all athletes may stand alongside each other equally, reaching for Olympic glory," May added.