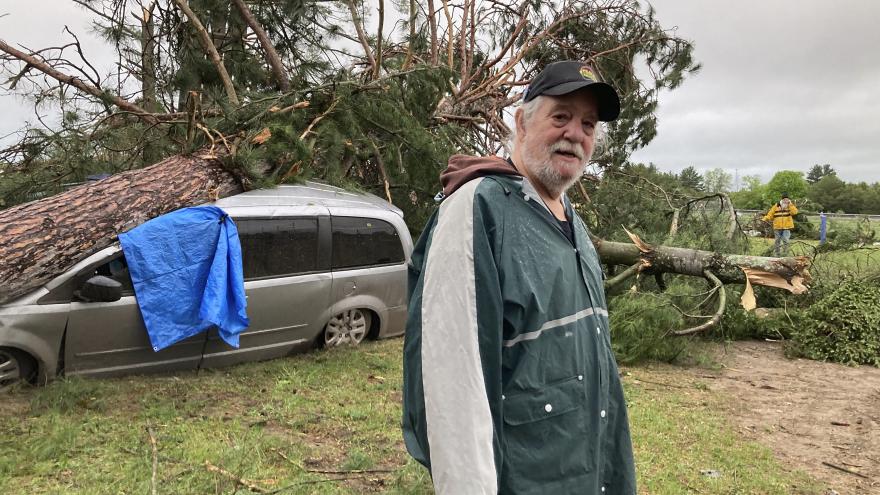 (CNN) -- Two people are dead after a powerful tornado ripped roofs off buildings and flipped cars in a northern Michigan town on Friday, prompting the governor to declare a state of emergency for the area.

The twister -- with maximum winds of 150 mph -- also injured 44 people as it tore through the town of Gaylord, which sits about 60 miles east of Traverse City in the state's Lower Peninsula, causing what officials describe as "catastrophic" damages.

"It took out an insane amount of buildings and just jeopardized so many lives," said Jordan Awrey, a Gaylord city council member. "The town is devastated."

Both victims were in the Nottingham Forest mobile home park and are in their seventies, according to Michigan State Police. Officials are still working on notifying the family of one of the victims.

The tornado touched down in a bustling part of the city, home to shops, restaurants and retail stores -- some of which were destroyed.

Photos of the damage show streets littered with debris, businesses with roofs and walls torn off, and cars completely flipped over. Roads were also blocked by downed trees and powerlines.

"It is a busy downtown area, and it went right through it," said Lt. Jim Gorno of the Michigan Department of Natural Resources, describing the aftermath as "catastrophic."

"Out of the (Nottingham Forest) mobile home park there is probably 95% destruction in there," Otsego County Fire Department Chief Chris Martin said. "There had been trailers picked up and turned over on top of each other and, you know, just a very large debris field from the trailers."

Brandon Smith, a 26-year-old Gaylord resident, said he was standing outside his house about a quarter of a mile from the tornado when he saw it rolling over some trees, recalling that it sounded like a freight train.

"I imagine it was deafening for those in its path," Smith said. "We're used to snow and that doesn't bother us but to see that type of weather just shocked everyone."

Michigan averages just 15 tornadoes per year, the state's website shows. About 25,000 people live in Gaylord and Otsego County, according to the US Census Bureau.

"It's northern Michigan, it's very rare we get a tornado," said Gabe Awrey, a resident and the council member's brother.

Munson Healthcare spokesperson Brian Lawson told CNN 35 people were taken to their system's hospitals for treatment, and another eight people were treated at facilities elsewhere. Michigan State Police said the number of injured is 44.

Gaylord is under a curfew until 8 a.m. Saturday, officials said.

A video taken by Dawn Grubaugh, who was in her truck with her partner as the tornado headed toward them, shows the aftermath of destruction.

In the video obtained by CNN affiliate WPBN, Grubaugh can be heard crying out as she recorded the tornado tearing through the town, barely missing them.

The couple had taken cover inside a car wash, and when they exited their vehicle they noticed that buildings around them, including a Hobby Lobby, had been ripped apart.

"A mass of debris, like we even have insulation stuck to our truck and just clumps," Grubaugh told WPBN. "We quickly snuck in and ducked into the car wash, and just in order to not get hit by any more debris, and as we pulled in, I span my camera forward and we watched the tornado go right across and take out about ... eight different campers, and everything, car haulers, stuff like that inside this little area that got wiped out completely."

More than a dozen homes and up to 50 cars have been lost due to the tornado, Gaylord Mayor Todd Sharrard told CNN, adding that cleanup efforts are underway.

"The community of Gaylord is very, very strong and it's tight-knit," Sharrard said. "The cleanup is happening as we speak right now. Between everybody and anybody that has a chainsaw or a rack or shovel is just out cleaning up our community."

The tornado has been rated an EF-3 based on a preliminary damage survey from the National Weather Service (NWS). NWS meteorologists are continuing their damage assessment and will release additional details as the survey continues.

"The strongest line segment generated a measured wind gust of 76 mph at Frankfort Light and continued to produce damaging wind gusts across Leelanau and Antrim counties as it quickly moved northeast," the NWS said.

More than 6,000 homes and businesses remained without power in Otsego County early Saturday following the tornado, according to PowerOutage.us

Michigan Gov. Gretchen Whitmer declared a state of emergency for the county in the wake of the tornado.

"We are making available all state resources in cooperation with local response and recovery efforts," Whitmer said during a news conference Friday night in Gaylord.

The governor also expressed her support for those impacted in the community.

"My heart goes out to the families and small businesses impacted by the tornado and severe weather in Gaylord," she said on social media. "To the entire Gaylord community -- Michigan is with you. We will do what it takes to rebuild."