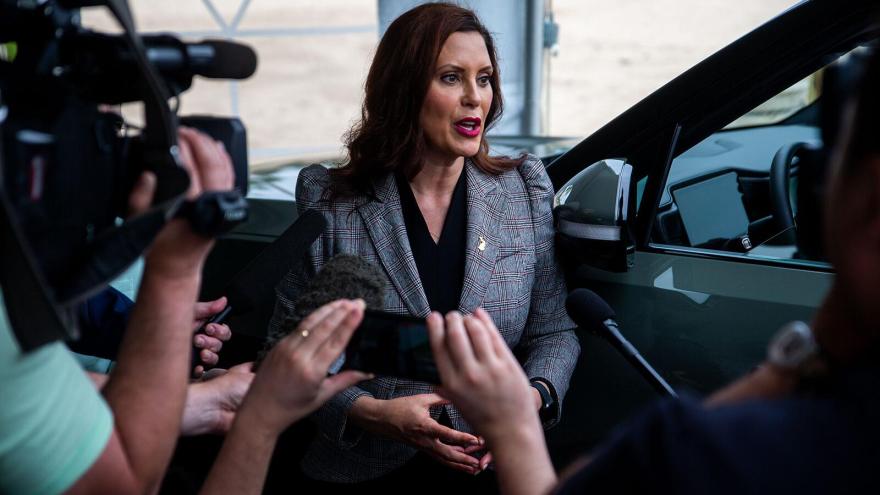 Michigan Gov. Gretchen Whitmer, pictured here, on May 26, has enacted a state of energy emergency following an electrical fire at a BP refinery in Indiana that threatens to disrupt fuel supply.

(CNN) -- Michigan Gov. Gretchen Whitmer has enacted a state of energy emergency following an electrical fire at a BP refinery in Indiana that threatens to disrupt fuel supply, the governor's office said Saturday.

The executive order issued by Whitmer lifts hours-of-service rules for the transport of gasoline and diesel and temporarily suspends certain laws and regulations to increase fuel supply stock.

"I am taking action to help address Michigan's fuel needs after a fire and power outage at a BP refinery in Indiana," Whitmer said in a statement. "The impacts of the outage at the Whiting facility will be widespread across our region, and I am taking proactive steps to help Michiganders get the fuel they need to drive their cars and help businesses keep their products moving."

The governor said BP's 435,000 barrel-per-day refinery in Whiting, Indiana, is undergoing a damage assessment following the Wednesday fire. The executive order said the Whiting refinery is the sixth biggest, by capacity, in the United States. It provides approximately 20% to 25% of the refined gasoline, jet fuel and diesel used collectively by Illinois, Indiana, Michigan and Wisconsin.

"With today's action, I am freeing up more gas supply and removing any impediments to gas delivery to cut down wait times at stations," Whitmer said.

In a statement to CNN on Saturday, BP said it responded to an electrical fire at the refinery on Wednesday. The company said no one was injured in the fire and there have been no known impacts outside of the refinery.

BP said its priorities are protecting the safety of crews, responders and the public; working with local and state agencies to monitor the impact; and continuing to assess when a restart of the affected units can take place.

The governor's executive order remains in effect only for the duration of the supply challenges related to the refinery fire or until the end of the day on September 15, depending on what comes first.