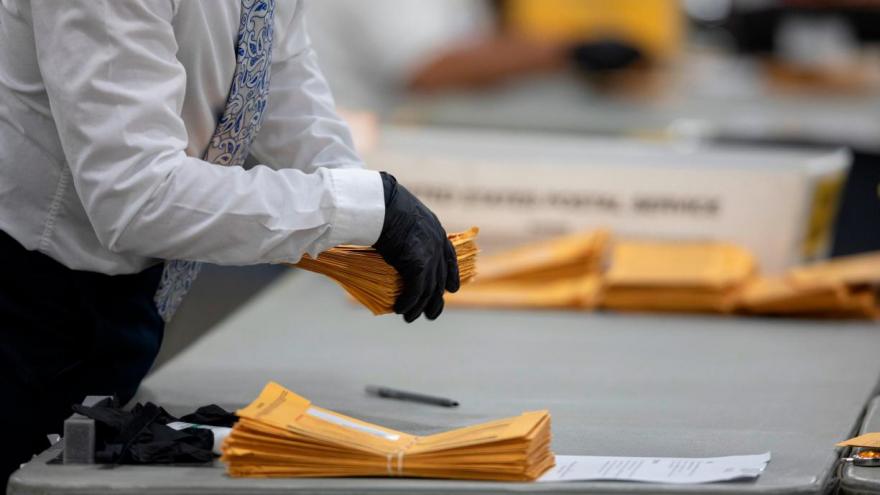 The Michigan State Board of Canvassers is expected to meet on Nov. 23 to vote on certifying the state's election results, a step that would formally grant President-elect Joe Biden the state's 16 electoral votes.

(CNN) -- The Michigan State Board of Canvassers voted Monday to certify the state's election results, formally granting President-elect Joe Biden the state's 16 electoral votes -- and all but erasing any pathway for President Donald Trump's to overturn the election results through legal challenges that have been dismissed in key states.

One of the two Republican members of the Michigan state canvassing board, Aaron Van Langevelde, joined the two Democrats to vote to certify the election results, after it was unclear how he would vote prior to the meeting.

The question of certifying Michigan's election results moved center stage amid the Trump campaign's dubious claims of voter fraud and efforts in court to delay certification and overturn the election results in several key states that voted for Biden.

The state's highly-anticipated certification was the latest in a series of episodes over the past week that have reinforced Biden's victory, even as Trump has refused to concede. The President instead spread wild false conspiracy theories about the election and invited Michigan state GOP lawmakers to the White House while his allies and legal advisers suggested the legislature should overturn the popular vote result -- something they do not have the power to do.

Also on Monday, the General Services Administration informed Biden that the Trump administration is ready to begin the formal transition process, according to a letter from Administrator Emily Murphy obtained by CNN. The letter is the first step the administration has taken to acknowledge Trump's defeat, more than two weeks after Biden was declared the winner in the election.

In Pennsylvania, the state Supreme Court on Monday rejected the Trump campaign's effort to block the counting of certain absentee ballots -- clearing the way for votes to be certified in multiple counties, including Philadelphia. That came after the Trump campaign's lawsuit on Saturday seeking to invalidate millions of Pennsylvania votes was dismissed by a federal judge in a withering decision.

Last week, Georgia's Republican governor and secretary of state certified the state's election results, though the Trump campaign requested a second recount following an audit that was completed prior to certification. Officials said they expect that to be completed by next week, before a crucial December 8 deadline for states to name their slates of electors.

After Michigan's Republican state legislative leaders visited with Trump at the White House last week, they issued a statement saying, "We have not yet been made aware of any information that would change the outcome of the election."

A Biden spokesman said of the Michigan election results, "We appreciate the state board's recognition of the plain facts: President-elect Joe Biden resoundingly won the state of Michigan by more than 150,000 votes -- 14 times the margin of Donald Trump in 2016."

"Certification by state officials is simply a procedural step," said Trump campaign legal adviser Jenna Ellis. "We are going to continue combatting election fraud around the country as we fight to count all the legal votes. Americans must be assured that the final results are fair and legitimate."

There was uncertainty swirling over the Michigan canvassing board meeting on Monday. The board is made of up two Democrats and two Republicans, and one of the Republican board members signaled he would oppose certifying the election result.

Aaron Van Langevelde, the other Republican board member, had not tipped his hand before the meeting, but he signaled how he would vote quickly after it got underway. Van Langevelde said that he believed he was required to certify the vote under state law, regardless of whether he believed there should be an audit of Wayne County's election results. He supported an audit, he said, but that did not mean the board should wait to certify the election first.

"We must not attempt to exercise power we don't have," he said.

Norman Shinkle, the second GOP board member, abstained from the final vote. He argued that the board should not certify the election results until an investigation into voting in Wayne County -- the state's largest, which includes Detroit -- was completed. Shinkle asked the Republican-led Michigan legislature to create a bipartisan commission to conduct a review of the 2020 election, which all board members backed, in a moment of bipartisanship. The legislature has already launched an investigation into the state's election, conducted by the House and Senate Joint Oversight Committee.

While Democratic board member Julie Matuzak supported certification, she did make a call for the state's election system to be modernized. Matuzak said that while she did not believe there was any fraud in the November election, the state needed to allow for the processing of absentee ballots earlier, modernize how poll workers and poll challengers are trained, and allow for unbalanced precincts to be recounted in order to eliminate some of the human error that still exists.

'The law is pretty clear here'

Before the vote, the board heard from election officials like local clerks, campaign lawyers and other experts, which Van Langevelde requested before voting. He revealed his viewpoint of the rules that govern the board through his debate the board's role with an attorney for GOP Senate candidate John James, who argued the canvassing board could adjourn and wait for the results of an audit before certifying the results.

"I found nothing about authority for us to delay certification" he said. "I found nothing that gives us the authority to review complaints fraud. I mean, I think the law is pretty clear here, and again this board has such limited authority."

Shinkle sought at the meeting to ask questions of Detroit City Clerk Janice Winfrey, who initially was not slated to speak but appeared via video, like other witnesses, after a brief recess. Shinkle asked whether the city had hired sufficient Republican poll workers for the election as required under state law, claiming Republicans who sought to work the polls were denied.

Winfrey responded that the city had hired as many Republicans as it could, but those who applied too late were not allowed to take the job.

Republican and Democratic state and local officials appeared via video to speak at the meeting. When one Republican repeated debunked conspiracy theories about the vote count, one of the Democratic board members asked whether the allegations had been submitted to the attorney general, because the canvassing board could not investigate those claims.

Brendan Flynn, who was a poll challenger at the TCF Center in Detroit where absentee ballots were counted, spoke to what he observed on Election Day. "The only disruptions I observed the entire day were from GOP challengers, who had difficulty following the rules" Flynn said. "The bottom line was there was nothing irregular or fraudulent about what I observed at the TCF center on November 3."

Trump has refused to concede

This was not the first drama-filled meeting over the typically pro-forma certification of election results in Michigan. Last week, the Republican canvassing board members in Wayne County initially voted against certification, blocking certification, before voting in favor hours later after a public uproar. The GOP board members received a call from Trump that night, and the following day they filed affidavits seeking to rescind their votes, which they could not do.

The Trump campaign has tried to interfere with the certification process through lawsuits, and Trump has courted Michigan officials as he and attorney Rudy Giuliani continue to claim without evidence widespread voter fraud and a "rigged election."

Trump met with Republican Michigan state lawmakers at the White House last week and state Republican leadership, who brought a letter asking for additional Covid-19 relief funding and said after the meeting that they did not see anything that would change the state's election result.

The Republican National Committee and Michigan Republican Party sent a letter to the board of canvassers on Saturday asking them to delay certification for 14 days. They also asked for them to wait for an audit of the election results in Wayne County, the largest county in the state that includes Detroit -- even though state law doesn't allow that.

After the state board certified the election result Monday, GOP Senate Majority Leader Mike Shirkey, who met with Trump last week, thanked the canvassing board. "The Senate will honor their unanimous request to closely review Michigan's elections process to identify much-needed improvements," he said.