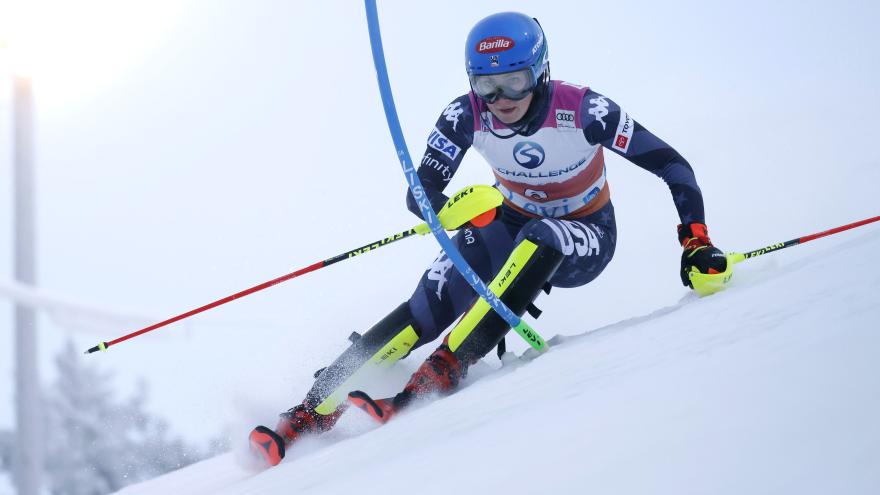 (CNN) -- Mikaela Shiffrin claimed her 75th World Cup win in Levi, Finland on Saturday, sealed with an electrifying second run, as she broke Lindsey Vonn's record for the most podiums in a single discipline by a female skier.

She is now just seven World Cup wins shy of her fellow American's record 82 wins for a female skier and 11 behind the all-time leader, Sweden's Ingemar Stenmark.

"It was a nice feeling on the first run, I felt pretty good, but I was holding back a little bit," she said, according to the International Ski Federation's (FIS) website, after her 67th World Cup slalom win. Vonn has 66 downhill victories.

"On the second run I made adjustments and it felt like a really good pace and tempo. I was strong and solid everywhere."

She carried an advantage of just two hundredths of a second from the first run into the second and entering into the steepest section of the course, she had fallen 0.14 seconds behind Slovakia's Petra Vlhova.

But on the steep and through to the finish, Shiffrin showcased her trademark power to complete both runs in a time of 1.51:25, pushing Sweden's Anna Swenn Larson to second place by 0.16 seconds.

Vlhova, who had won the previous four slaloms in Levi, eventually finished in third.

"Today was a really good day. It was not easy, I was a bit nervous but in the end I could ski the way I wanted to," Shiffrin told Eurosport afterwards.

"On the second run especially, I really felt the good skis, the turns that are fun to do so sometimes you push as hard as you can and it doesn't work -- you straddle, or you don't win. It can be heartbreaking but for today we can be happy about it and refocus again for tomorrow."

It marked Shiffrin's continuing triumphant return to form after she failed to finish three of the six events she entered at the 2022 Winter Olympics in February and returned from Beijing empty-handed.

And, as well as the gold medal, Shiffrin will return home from Levi with her fifth Lapland reindeer, the traditional prize at Levi.

"I don't have any ideas [about a name] but we can have a debrief later with the team," she said, according to the FIS website. "I'll come up with the name later, or tomorrow. I never think about a name before I race, because I don't want to jinx it."