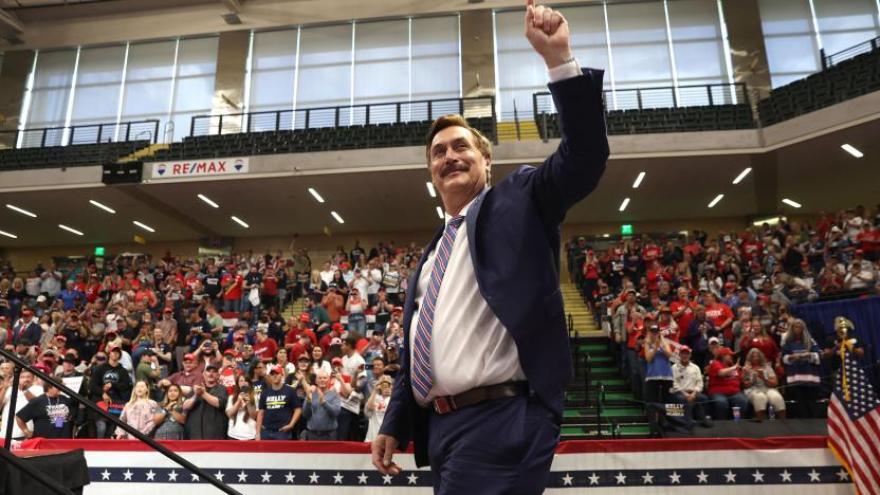 MyPillow CEO Mike Lindell greets the crowd during a "Save America" rally at Alaska Airlines Center on July 9 in Anchorage, Alaska.

(CNN) -- The Justice Department is seeking information about at least seven people in connection with a breach of a Colorado county's voting system as part of efforts to subvert the 2020 election results, according to subpoena documents obtained by CNN that reveal new details about the breadth of the investigation.

The subpoena issued to MyPillow CEO Mike Lindell earlier this week lists the names of people considered "subjects" in the investigation -- including people involved in efforts to seize voting machine data in several states as former President Donald Trump and his allies tried to overturn his electoral loss. Lindell has not been charged with any crimes or wrongdoing.

It's unclear if federal investigators have opened probes into what happened in other states, but the subpoena shows they are gathering evidence related to three potential crimes in Mesa County, Colorado: identity theft, intentional damage to a protected computer and/or conspiracy to commit either.

The subpoena covers "all records and information" on Lindell's phone that constitutes as evidence against seven named individuals or any other unnamed co-conspirators. It details several areas of interest for investigators related to Dominion voting systems and any efforts to damage or access them.

Lindell was involved in the broader effort to find evidence of voter fraud after the 2020 election, with the goal of backing-up former President Donald Trump's baseless claims that the election had been stolen.

Earlier this year, Mesa County clerk Tina Peters was indicted on 10 counts related to voting machine tampering allegations after an apparent security breach in Mesa County's elections office in May 2021. Peters has pleaded not guilty.

Peters appeared last year at Lindell's "Cyber Symposium," a gathering of election deniers at which a host of debunked conspiracy theories about the 2020 election were promoted.

In addition to Peters, the subpoena issued to Lindell sought information about a half-dozen others who have been connected to the efforts in Colorado and other states to gain access to voting data.

Most of the individuals are tied directly to the Mesa County scheme.

Two of the individuals, Belinda Knisley and Sandra Brown, were Peters' deputies in the Mesa County elections office and were charged in the Colorado state case earlier this year.

Knisley reached a plea deal last month in exchange for her cooperation. According to the plea deal, Knisley told investigators that Peters created a scheme in which she helped an unauthorized individual gain entry to secure areas inside the clerk's office and to the county's election equipment. Knisley told investigators that individual was Conan Hayes, who was also listed on Lindell's subpoena. (Hayes has not been charged.)

Lindell told CNN last summer that he had paid Hayes and other so-called cyber experts "a lot of money" to review what he described as data from the 2020 election.

Hayes, a surfer-turned-election denier, was part of the team of pro-Trump operatives who accessed voting systems in Antrim County, Michigan, in early December 2020. He worked with individuals like Cyber Ninja CEO Doug Logan to produce a since debunked-report about Antrim County's Dominion voting machines that was used by the former President and his allies as evidence of widespread election fraud.

Lindell told CNN last year that he paid Hayes and other "cyber forensic experts" to analyze data from the 2020 election.

Hayes and Logan did not respond to CNN's request for comment.

In addition, the subpoena listed Sherronna Bishop, the former 2020 campaign manager for Rep. Lauren Boebert of Colorado, who is a close ally to Peters and has appeared with the embattled county clerk at various political rallies and numerous videos on social media.

In November 2021, the FBI and local investigators executed a search warrant at Bishop's house as part of the investigation looking into the Mesa County security breach.

Bishop is an election denier and has posted several far-right conspiracy theories on a Facebook page she operates called "America's Mom." She has also posted photos with Lindell and Trump. Asked about her name appearing on the subpoena served to Lindell, Bishop told CNN in a text message that she continues "to stand with and fully support Clerk Tina Peters creation of forensic images." She also has not been charged.

The Lindell subpoena also listed Douglas Frank, who has gained prominence in Trump world with his theories about the 2020 election results. Frank previously told CNN he has trained teams in 30 states so far on how to examine their voting rolls to uncover potential fraud and more have asked for help. It's part of his claim that state voter registration rolls have been inflated with fraudulent or "phantom" voters.

Frank previously said he began focusing on building relationships with election officials in December 2020 and has recruited dozens, including clerks and other office workers, in counties across the country to support their effort. Frank claimed that Lindell has been providing financial backing for his work, paying for flights and other expenses.

"I am working with dozens of election officials across the country. I keep their identities confidential unless they wish to go public," Frank said in January.

Frank told CNN on Thursday that the FBI agents confiscated his phone after presenting him with a warrant to do so. "It took about 20 minutes," he said about the interaction with FBI agents. He has not been charged with any crimes.

Lindell has emerged as one of the most vocal boosters still pushing false claims about the 2020 election. In a series of so-called documentaries, Lindell has advanced an increasingly outlandish theory that foreign hackers broke into the computer systems of election offices to switch votes -- in what he has described as the "biggest cyber-crime in world history."

He is also one of just a handful of individuals still fighting to block the House select committee investigating the January 6 insurrection from obtaining their phone records and has been engaged in a months-long court battle with the panel.