Missouri community had raised concerns for years about the train crossing where 4 people were killed, investigator says 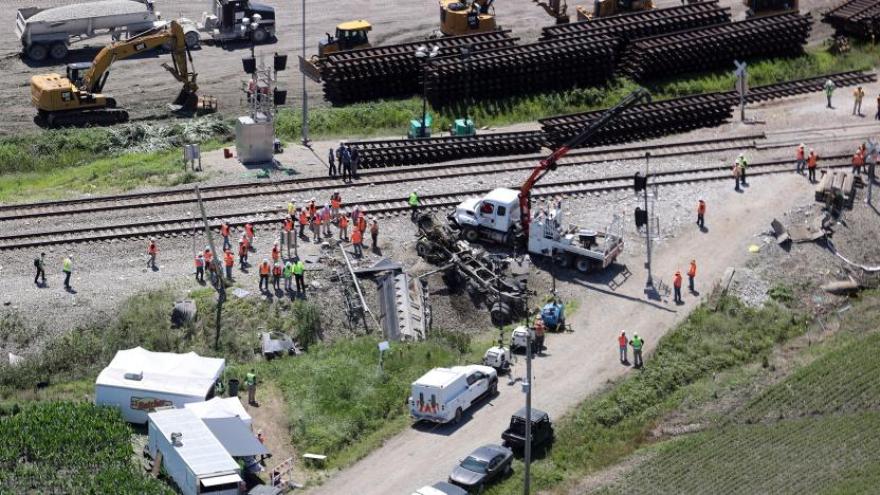 Members of the National Transportation Safety Board arrive to investigate Monday's Amtrak Derailment after the train struck a dump truck at an uncontrolled crossing in Mendon, Missouri where four have been reported dead with 150 injured. June 28.

(CNN) -- Members in the Missouri community where an Amtrak train struck a dump truck and killed four people this week had previously raised concerns about the crossing where the crash took place, a top federal official said Wednesday.

"The community has really been focused on this crossing for years," National Transportation Safety Board Chair Jennifer Homendy said during a news briefing. Homendy said she met with local authorities including the county presiding commissioner to get more information on "community complaints" about the crossing.

The NTSB chair also talked to a local farmer who had expressed concern about the crossing. Others in the community had also complained about the steepness of the crossing, navigating the crossing in general and sight distance, Homendy said.

"It's important you hear what the community faces challenges with," Homendy said. "We're looking at everything around the crossing, including the slope but also the top of the crossing."

Earlier Wednesday, authorities identified the four people who were killed in Monday's crash near the town of Mendon.

The victims were Billy Barton II, 53, who was driving the dump truck; and train passengers Rochelle Cook, 57; Kim Holsapple, 56; and Binh Phan, 82, the Missouri State Highway Patrol (MSHP) said. All but Phan were pronounced dead on the scene, the agency said. Phan died at a hospital later that same day, MSHP added.

About 150 people were transported to hospitals for injuries that ranged from "minor to serious in nature," the MSHP said Tuesday.

There were roughly 275 passengers and 12 crew members on the train at the time of the accident, the MSHP has said.

The collision took place shortly after 12:40 p.m. on Monday, according to Amtrak. Eight of the train's cars and two locomotives left the track, it said.

Investigators have said this was an "uncontrolled" train crossing, which means there were no lights or mechanized arms.

The "very steep" incline can also have an impact on large and heavy vehicles, Homendy said. The agency is also looking into whether drivers could see trains approaching, she said, adding that meant looking at the kind of vegetation that's on or along the track and other factors that could hinder a driver's vision.

The train's speed when its horn began blowing -- about a quarter-mile before the crossing -- was 89 mph, the NTSB chair said. At the time of the crash, the train was going at 87 mph, Homendy said.

The speed limit for trains in the area is 90 mph, according to the NTSB.

Investigators were able to view footage from the train's forward-facing camera but are still working to gather more information on the operation of the truck, Homendy said.

The agency also downloaded data from the train's event recorder and checking to see whether the truck's electronic control module was damaged in the collision, Homendy previously said.

A preliminary report with all the facts of the crash will be ready in roughly two weeks, Homendy said.

The collision was the third in two days involving an Amtrak train. On Sunday, an Amtrak train passing through an intersection without crossing gates in rural Brentwood, California, collided with a passenger vehicle, killing three people and injuring two others.

Amtrak said in a statement that trespassing on railroad rights-of-way is the leading cause of rail-related deaths, adding the tragic incidents "serve as critical reminders about the importance of obeying the law and of exercising extreme caution around railroad tracks and crossings."

Also Sunday, a motorist was killed when an Amtrak train collided with a vehicle in Alabama, Birmingham Fire and Rescue Battalion Chief Sebastian Carrillo told CNN. In that case, the crossing had arms, audio and visual signs, Carrillo said. A release from the local coroner said the person in the car drove around downed arms.

Correction: A previous version of this story gave the incorrect spelling for the name of one of the victims, Binh Phan.