Mitch McConnell calls Biden's speech 'incoherent' and 'beneath his office' 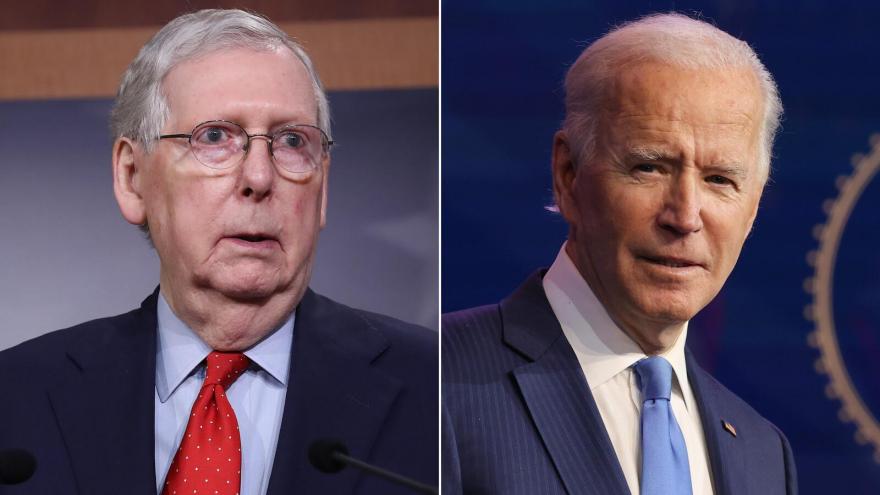 (CNN) -- Senate Minority Leader Mitch McConnell blasted President Joe Biden's speech pushing for the Senate to change its filibuster rules to pass voting and elections legislation, saying it was a "rant," "incoherent," "incorrect," "beneath his office" and "unbecoming of a President of the United States."

"How profoundly -- profoundly -- unpresidential," the Kentucky Republican said Wednesday on Capitol Hill. "I've known, liked and personally respected Joe Biden for many years. I did not recognize the man at the podium yesterday."

Biden in Georgia on Tuesday equated supporters of Senate rule changes to civil rights icons and opponents to segregationists and a leader of the Confederacy.

Despite Biden's pressure, Senate Democrats are unlikely to pass voting legislation, because of influential centrists like Joe Manchin of West Virginia and Kyrsten Sinema of Arizona, who are unlikely to support the necessary rules changes.

McConnell seemed to recognize that Democrats don't have enough votes to eliminate the filibuster, which requires 60 votes to advance most legislation, saying Biden had compared "a bipartisan majority of senators to literal traitors."

"You could not invent a better advertisement for the legislative filibuster than what we've just seen, a President abandoning rational persuasion for pure, pure, demagoguery," McConnell said. "A president shouting that 52 senators and millions of Americans are racist unless he gets whatever he wants is proving exactly why the framers built the Senate to check his power."

In response to McConnell's sharp criticism, Biden told reporters that he likes the Senate GOP leader and called McConnell "a friend."

Many Democratic senators want to change the filibuster rules in order to pass legislation expanding access to the ballot box over a Republican blockade in the Senate. In the last year, 19 states passed 34 laws that restrict voting in some way, according to an analysis by the liberal-leaning Brennan Center for Justice.

When asked by CNN's Jake Tapper about Biden's stark attack on his opponents, Illinois Sen. Dick Durbin said Republican-led states "are taking step by weary step to make sure that ... fewer Americans are going to vote." Durbin said there are "parallels" between what they are doing today and what segregationists did in the past to curtail voting rights for Black voters.

"Perhaps the President went a little too far in his rhetoric — some of us do — but the fundamental principles and values at stake are very, very similar," added Durbin, the No. 2 Democrat in the chamber.

Among the bills Senate Democrats would like to pass are the Freedom to Vote Act, the John Lewis Voting Rights Advancement Act and the Electoral Count Act.

The first bill would make broad changes, including establishing Election Day as a public holiday, mandating same-day voter registration, guaranteeing that all voters can request mail-in ballots and restoring federal voting rights for ex-felons once they are released from prison. The second measure would restore the power of the federal government to oversee state voting laws in order to prevent discrimination against minority voters. The third bill would further clarify the process of certifying a presidential election after then-President Donald Trump and his advisers urged then-Vice President Mike Pence to toss out Biden's slate of electors on January 6, 2021.

Democratic National Committee spokesperson Ammar Moussa called McConnell's speech Wednesday a hypocritical "tantrum," noting that the senator had changed the Senate's rules to get rid of the filibuster for Trump's Supreme Court nominees. McConnell did so after Democrats had changed the rules for lower-level judicial nominees under President Barack Obama, who blamed McConnell for blocking or delaying many of his nominees.

"While McConnell leads Republicans in their relentless war against protecting the right to vote and hypocritical defense of Senate rules, President Biden and Democrats continue to fight to protect Americans' fundamental rights," said Moussa. "Mitch McConnell can save his crocodile tears -- the American people see right through it."

McConnell argued that Georgia has more days of early voting than Delaware or New York.

"Georgia has no-excuse absentee voting, which Delaware and New York do not have," said McConnell. "If Georgia or Texas present Jim Crow emergencies, then so do a whole lot of Democratic-run states."

"The people who spent November 2020 through January 21 preaching sermons about the strength and the sanctity of our democracy are now undertaking to delegitimize the next election in case they lose it," McConnell said.