'More and more convergence' with allies on costs to Russia if they invade Ukraine, says State Department official 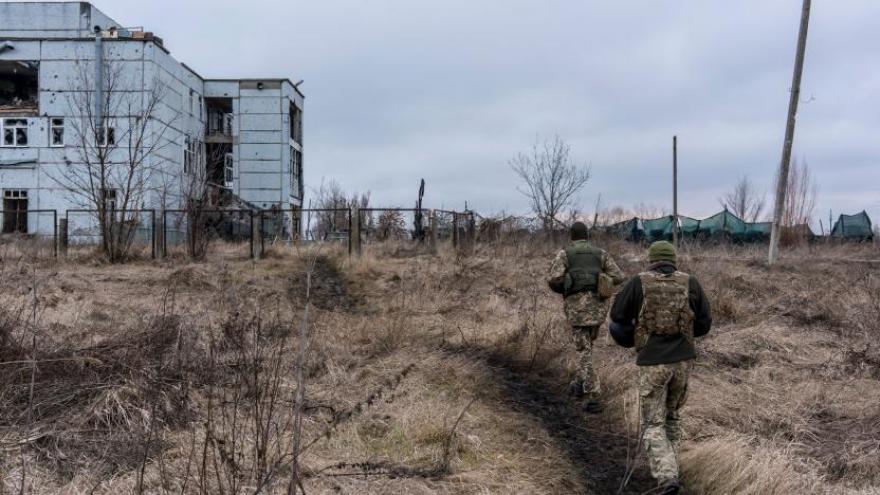 Ukrainian soldiers walk toward a destroyed building on the front line on December 8, in Marinka, Ukraine.

(CNN) -- Each day there has been "more and more convergence" between the US and European allies about the costs that would be inflicted on Russia if they invade Ukraine, a senior State Department official said in a briefing with reporters after Secretary of State Tony Blinken met with G7 allies.

"I think we are having more and more convergence every day," the official said Saturday when asked if there is agreement about the first round of costs the US and its allies would inflict on Russia if they became more aggressive towards Ukraine.

There is "obviously technical work that needs to be done," the official added, but at the political level "there's a huge amount of convergence about what will unfortunately be necessary if Russia makes that very bad choice."

The kinds of costs the US and European allies are discussing for Russia are "designed to be implemented very, very fast," the official said, without detailing what those measures would be. "That is partly why we have chosen the measures that we are working on."

The Biden administration has repeatedly said there will be severe economic consequences. Biden's national security adviser Jake Sullivan also made clear last week there will be further US defensive military support for Ukraine as well as US support for NATO countries on the eastern flank of Russia invades Ukraine.

When it comes to sanctions, the Biden administration is drafting options for multiple rounds of harsh sanctions on Russia if it moves to invade Ukraine, CNN has reported. They have made it clear they intend to act alongside European allies.

The official said Saturday it is expected not only the G7 but a "large number of democratic countries" would join the US in inflicting costs.

During a Saturday news conference on the deadly tornadoes and storms that struck the Midwest and south, President Joe Biden was asked about consequences for Russia should they invade Ukraine.

"I've made it absolutely clear to President Putin," Biden said. "If he moves on Ukraine, the economic consequences for his economy are going to be devastating. Devastating, number one. Number two, we will find it required that we'll have to send more American and NATO troops into the Eastern Flank, the (Bucharest) 9, all those NATO countries where we have a sacred obligation to defend them against any attack by Russia. And number three, the impact of all of that on Russia and his attitude, the rest of the world, his view of Russia would change markedly. He'll pay a terrible price."

Donfried will have an opportunity to hear from Ukrainians, including how they see the Minsk agreements, and how they would see the US engaging on that front, the official said.

"What we will do next week is begin to better understand where this might go, but until we talk to our European allies and partners I do not think there will be any negotiating," the official said.