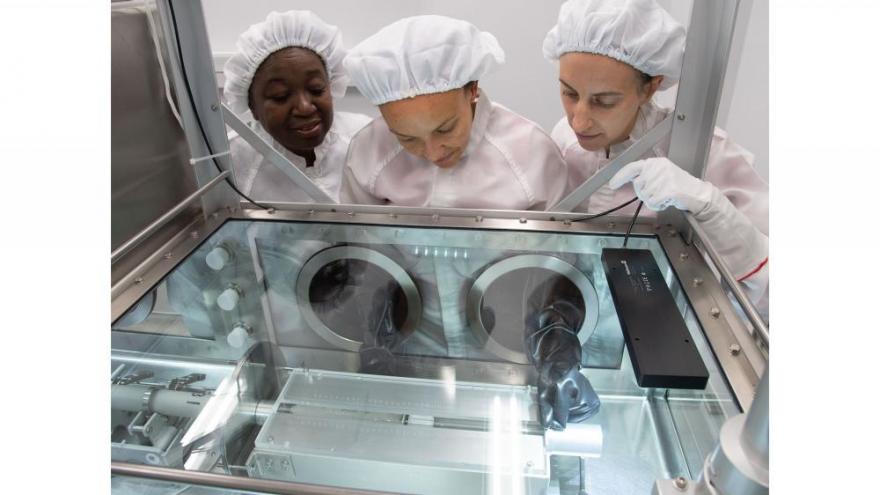 Scientists from NASA have opened up an untouched Moon rock and soil sample that was brought back by the Apollo 17 lunar mission, which returned to Earth in December 1972.

(CNN) -- Scientists from NASA have opened up an untouched Moon rock and soil sample that was brought back by the Apollo 17 lunar mission, which returned to Earth in December 1972.

The samples were opened on Tuesday as a part of NASA's Apollo Next-Generation Sample Analysis (ANGSA) initiative.

The purpose of these tests is to practice techniques in order to study future samples collected from the Moon on Artemis missions, which is NASA's mission to land the first woman and next man on the Moon by 2024.

"Opening these samples now will enable new scientific discoveries about the Moon and will allow a new generation of scientists to refine their techniques to better study future samples returned by Artemis astronauts," said Francis McCubbin, NASA's astromaterials curator. "Our scientific technologies have vastly improved in the past 50 years and scientists have an opportunity to analyze these samples in ways not previously possible."

Most of the samples that were brought back from the Apollo missions have either been studied or are part of ongoing research at NASA. However, a number of samples were carefully stored and set aside to be tested with more advanced technology as it is developed.

"We are able to make measurements today that were just not possible during the years of the Apollo program," said Dr. Sarah Noble, ANGSA program scientist. "The analysis of these samples will maximize the science return from Apollo, as well as enable a new generation of scientists and curators to refine their techniques and help prepare future explorers for lunar missions anticipated in the 2020s and beyond."

NASA will use advances in techniques such as non-destructive 3D imaging, mass spectrometry and ultra-high resolution microtomy to study the samples.

"The findings from these samples will provide NASA new insights into the Moon, including the history of impacts on the lunar surface, how landslides occur on the lunar surface, and how the Moon's crust has evolved over time," said Charles Shearer, science co-lead for ANGSA. "This research will help NASA better understand how volatile reservoirs develop, evolve and interact on the Moon and other planetary bodies."

NASA will equip astronauts with new instruments and tools to study the moon for the Artemis missions in 2024. Ultimately, NASA hopes that all of this research will be used to prepare for the next phase of space exploration, which is sending astronauts to Mars.