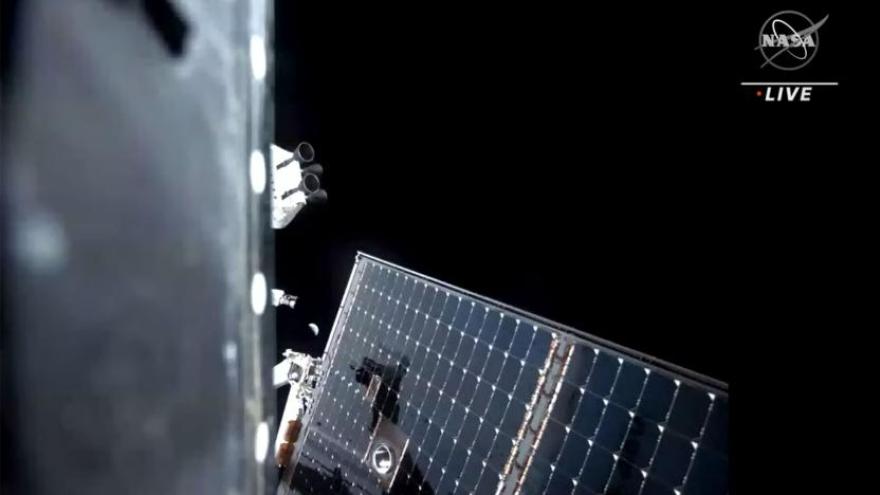 The NASA Orion spacecraft has jolted itself out of its current orbital path, readying for a final pass around the moon. Orion, the core of the Artemis I mission, is making a farewell pass by the moon on its historic journey before heading home to Earth.

(CNN) -- The NASA Orion spacecraft, the core of the Artemis I mission, is making a farewell pass by the moon on its historic journey before heading home to Earth.

The capsule, which has spent the past 15 days traveling into deep space and making an unprecedented trek beyond the moon, fired up its onboard engine for about one minute and 45 seconds Thursday afternoon to jolt itself out of its current orbital path.

The Orion spacecraft is now expected to take another lap around the moon. The final pass will once again take Orion just over 80 miles (128.7 kilometers) above the lunar surface Monday morning. The flyby will offer views of notable lunar sites, including lava beds that astronauts explored during the Apollo era. From there, the capsule will fire up its engines to set itself on a course back toward Earth.

The spacecraft is on track to make a splashdown landing in the Pacific Ocean off San Diego on December 11. That will mark the end of the historic Artemis I mission, which kicked off when the Orion spacecraft launched atop NASA's new Space Launch System, or SLS, rocket on November 16. The launch cemented the SLS as the most powerful rocket ever to reach orbit — and the historic milestones did not stop there.

After reaching space and separating from the SLS rocket, the Orion capsule made it to a far-flung lunar orbit that allowed it to reach more than 40,000 miles (64,374 kilometers) beyond the far side of the moon. That's farther than any spacecraft designed to carry humans has ever flown.

The spacecraft is, however, flying empty for this mission, except for a few mannequins — and Snoopy — that are designed to gather data, along with some mementos.

The overall goal of Artemis I — the first in a series of increasingly difficult missions aimed at sending humans back to the moon's surface — is to test the spacecraft to its limits, gleaning valuable insights for NASA.

Where Orion goes from here

So far on its journey, the Orion spacecraft has completed several key milestones and outperformed expectations, but as long as the capsule remains in space, there is always risk, Michael Sarafin, the Artemis I mission manager, told reporters during a news conference this week. He noted that the risk of hitting orbital debris is constantly looming. And the capsule's reentry into the Earth's atmosphere will be among the most strenuous and treacherous portions of the flight.

"The biggest test after the launch is the reentry because we want to know that that heat shield works at about 5,000 degrees Fahrenheit (2,760 degrees Celsius), almost half as hot as the sun, coming in at 32 times the speed of sound (nearly 40,000 kilometers per hour)," NASA Administrator Bill Nelson told reporters Monday.

After plunging back into the atmosphere, Orion will then need to deploy parachutes safely and slow its descent before making its targeted splashdown.

NASA will have a fleet of recovery vehicles waiting nearby, including a ship, two helicopters, four inflatable boats, two rafts and an aircraft, Sarafin said during a Wednesday news conference.

"The team that is performing the recovery operations is at sea right now performing just-in-time training," Sarafin added.

If the Artemis I mission is successful, NASA will then look to choose a crew to fly on the Artemis II mission, which could take off as soon as 2024. Artemis II will aim to send astronauts on a similar trajectory as Artemis I, flying around the moon but not landing on its surface.

The Artemis III mission, currently slated for a 2025 launch, is expected to put boots back on the moon, and NASA officials have said it will include the first woman and the first person of color to achieve such a milestone.

Read more: The big numbers that make the Artemis I moon mission a monumental feat

The spacecraft's performance during this mission has been "outstanding," Howard Hu, the Orion program manager, told reporters Monday evening. There were some minor issues, including a brief communications problem, early in the journey. But overall, the spacecraft is outperforming expectations, such as producing about 20% more power than it needs, Hu noted.

Sarafin added that the mission is going so well that NASA has updated it to include additional objectives to gather more data about the spacecraft's capabilities and performance.