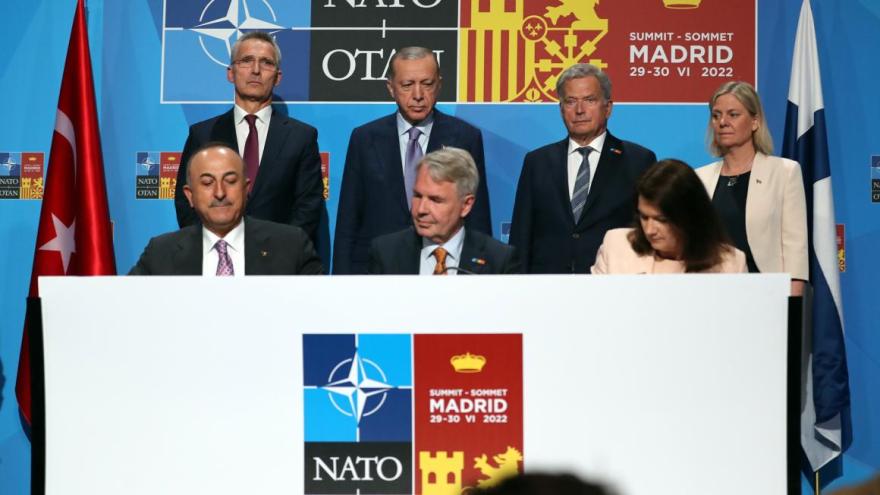 US President Joe Biden and fellow NATO leaders assembled in the Spanish capital of Madrid on June 29 and announced a significant strengthening of forces along the alliance's eastern flank as Russia's war in Ukraine shows no signs of slowing.

(CNN) -- NATO formalized its invitation to Sweden and Finland to join its alliance Wednesday, a historic expansion of the defense bloc that directly undercuts Russian President Vladimir Putin's aims as his war in Ukraine grinds ahead.

The group collectively decided to approve countries' applications to join after Turkey dropped its objections Tuesday, paving the way for NATO's most consequential enlargement in decades.

The decision will now go to the 30 member states' parliaments and legislatures for final ratification. NATO's leaders said they expected the process to move quickly, allowing for an unprecedentedly swift accession and a show of unity against Putin.

The leaders entered Wednesday's talks propelled by a diplomatic victory after Turkey dropped its objections to the two nations joining NATO, setting the stage for the two longtime neutral countries to enter the defensive bloc. NATO chief Jens Stoltenberg called the formal invitation from the alliance to Sweden and Finland to join the defense bloc a "historic decision."

"The agreement concluded last night by Turkey, Finland and Sweden paved the way for this decision," the secretary general said in a news conference.

He recounted how two rounds of talks were held by senior officials in Brussels under his auspices in the advance of Monday's consequential meeting between Finnish President Sauli Niinistö, Swedish Prime Minister Magdalena Andersson and Turkish President Recep Tayyip Erdoğan. Turkey agreed on Tuesday to drop its objections to their membership bids, removing a major hurdle to them joining NATO.

The expansion vote, paired with substantial new commitments bolstering NATO's force posture in Europe, combined to make this week's summit in Madrid one of the most productive in recent memory. The alliance endorsed a new "Strategic Concept" document that outlines the NATO's goals for the next decade. The document, last updated in 2010, lays out the security challenges facing the defensive alliance while outlining a course of actions.

For the first time, the document outlined the China "challenge," saying that the country's "ambitions and coercive policies challenge our interests, security and values." This was the first time the Strategic Concept document mentioned China; the 2010 version made no mention of Beijing. It also states that climate change is "a defining challenge of our time."

The document identifies Russia as the "most significant and direct threat to allies' security and to peace and stability in the Euro-Atlantic area" and addresses NATO's support for an independent Ukraine. In the 2010 version of the document, Russia was referred to as a "Euro-Atlantic partner."

The outcome is exactly what Putin was hoping to fend off when he invaded Ukraine more than four months ago.

Biden and fellow NATO leaders assembled in the Spanish capital to unveil a significant strengthening of forces along the alliance's eastern flank as Russia's war in Ukraine shows no signs of slowing.

Speaking alongside Stoltenberg, Biden listed new troop movements, equipment shipments and military installations meant to demonstrate the importance of security in the face of Moscow's aggression.

"The United States and our allies, we are going to step up -- we are stepping up. We're proving that NATO is more needed now than it ever has been and is as important as it ever has been," Biden said.

He said the US would establish a permanent headquarters for the Fifth Army Corps in Poland, maintain an extra rotational brigade of 3,000 troops in Romania, enhance rotational deployments to the Baltic states, send two more F-35 fighter jet squadrons to the United Kingdom and station additional air defense and other capabilities in Germany and Italy.

"Together with our allies, we are going to make sure that NATO is ready to meet threats from all directions -- across every domain, land, air and the sea," Biden said.

The United States did not convey to Russia its plans to bolster its force posture in Europe ahead of time.

"There has been no communication with Moscow about these changes nor is there a requirement to do that," John Kirby, the NSC coordinator for strategic communications, said after Biden announced the series of measures.

A second official told reporters the announcements did not violate any agreements between Russia and NATO, which stipulate parameters for positioning troops in Europe.

"The decision to permanently forward station the Five Corps headquarters forward command post does not, you know, is consistent with that commitment and our understanding of the NATO Russia founding act," said Celeste Wallander, United States assistant secretary of defense for international affairs.

Zelensky asks what Ukraine has to do to join NATO

Yet even if Putin's aims have backfired and the conflict grinds on, momentum is favoring Russia at the moment. That has left Biden and fellow western leaders this week searching for ways to alter the trajectory of the war.

Despite enthusiasm at the summit for NATO's two newest members, another leader -- Ukraine's President Volodymyr Zelensky -- voiced frustration that his country's NATO ambitions have been ignored, despite coming under siege by Russia.

Addressing the NATO summit in Madrid virtually, Zelensky asked rhetorically, "Has Ukraine not paid enough" to join the alliance and review its open door policy.

"Is our contribution to the defense of both Europe and the whole civilization still insufficient?" he asked. "What else is needed then?"

Ukraine has sought unsuccessfully to join NATO for years, hampered by concerns over provoking Russia and other issues related to its governance practices.

"Ukraine can count on us for as long as it takes," Stoltenberg stressed to journalists. He commended Zelensky's "leadership and courage" and called the Ukrainian leader "an inspiration to us all."

Already this week, the US and European nations have slapped new rounds of sanctions on Moscow, banned new imports of its gold and agreed to limit the price of its oil. New rounds of security assistance, including a US-provided missile defense system, have been added to the queue of artillery and ammunition flowing in Ukraine.

Whether any of that is enough to fundamentally alter the way the war is going remains to be seen. Zelensky told leaders attending the G7 summit in Germany he wanted their help staging a major initiative to win the war by the end of the year. In an interview with CNN's Jim Sciutto on "Newsroom" Wednesday, Kirby pushed back on the idea that the US would lean on Zelensky to give up territory to Russia in order to end the war.

"This victory has got to be decided by President Zelensky, and he gets to decide what that looks like for his country. Our job is to make sure he can continue to defend himself," Kirby said.

Leaders worry the growing cost of the war, seen in rising gas and food prices, could lead to diminished support for Ukraine in the months ahead. A few have warned that fatigue is setting in, adding to the growing concerns that the alliance could fracture.

"When we agreed we were going to respond, we acknowledged there was going to be some costs to our people, our imposition of sanctions on Russia. But our people have stood together. They've stood up and they've stood strong," Biden said Tuesday when he was meeting with King Felipe VI at the Royal Palace in Madrid.

It was during that meeting Biden received word Turkey was dropping its objections to Finland and Sweden's applications to join NATO, ending a months-long standoff with NATO's most challenging member.

In order to get the deal struck before the summit, Biden dangled the prospect of a formal bilateral meeting with Erdoğan in a phone call on Tuesday morning. The leaders met Wednesday to discuss the myriad issues that have caused the relationship between Washington and Ankara to sour over the past several years.

"I want to particularly thank you for what you did, putting together the situation with regard to Finland and Sweden, and all the incredible work you're going to try to get the grain ... out of Ukraine," Biden told Erdogan.

Biden also met jointly with Japan's Prime Minister and South Korea's President to focus on the threat from North Korea. Prime Minister Fumio Kishida and President Yoon Suk Yeol are invited guests of the NATO summit, but their countries' ties have deteriorated recently amid disputes over wartime histories, making the joint meeting with Biden a rarity.