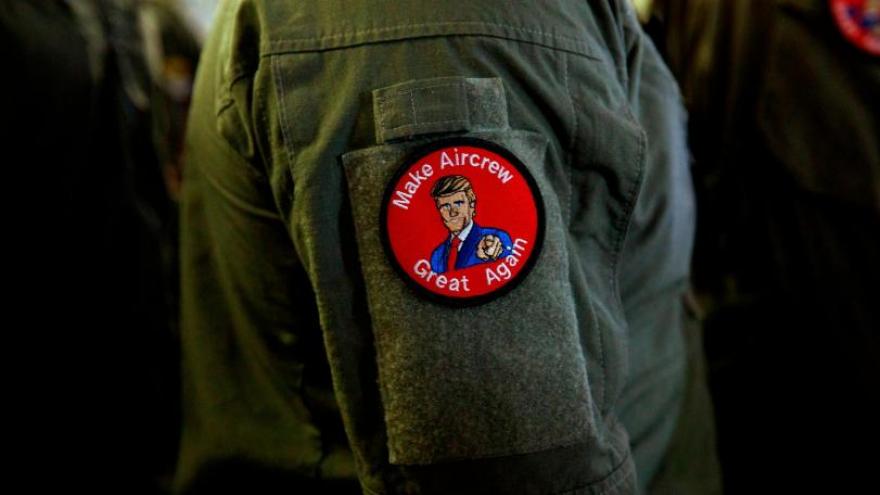 A review conducted by the US Navy found that sailors violated Pentagon rules by wearing "Make Aircrew Great Again" patches on their uniforms during President Donald Trump's visit to the USS Wasp last year, according to the Pacific Fleet.

(CNN) -- A review conducted by the US Navy found that sailors violated Pentagon rules by wearing "Make Aircrew Great Again" patches on their uniforms during President Donald Trump's visit to the USS Wasp last year, according to the Pacific Fleet.

Several service members aboard the ship were seen wearing patches showing a Trump-like image and a play on the President's "Make America Great Again" campaign slogan when he addressed sailors last May.

"Though the investigation found the Sailors did not intend to wear the patches as a political statement for or against the President, U.S. Pacific Fleet determined that, because the American public could reasonably view the wearing of the patches on official uniforms as DoD association with President Trump's 2020 campaign, it was in violation of DoDD 1344.10," Pacific Fleet spokesperson Rachel McMarr said in a statement Thursday.

In response to the findings, McMarr said the Navy has taken "appropriate administrative measures" to ensure the leaders and sailors involved understand the requirements outlined in by the Defense Department and "give due consideration to the heightened risk that actions by service members in uniform will be perceived as an official DoD position."

Military.com was first to report the decision.

During his visit and Memorial Day speech, Trump praised the US military as the strongest in the world and polled the crowd as to whether they preferred steam-powered or electric catapults that help launch jets off the decks of aircraft carriers, saying a recent cost overrun had caused him to deem the old method -- steam -- preferable.

The Wasp has neither type of catapult system.

However, service members are prohibited from exhibiting political messages while in uniform.

Unit commanders are usually responsible for ensuring that the unofficial patches do not violate military regulations.

"All Department of Defense personnel must be steadfast in our commitment to defend the Constitution and our Nation's democratic principles. As citizens, we exercise our right to vote and participate in government. However, as public servants who have taken an oath to defend these principles, we uphold DoD' s longstanding tradition of remaining apolitical as we carry out our official responsibilities," he wrote.