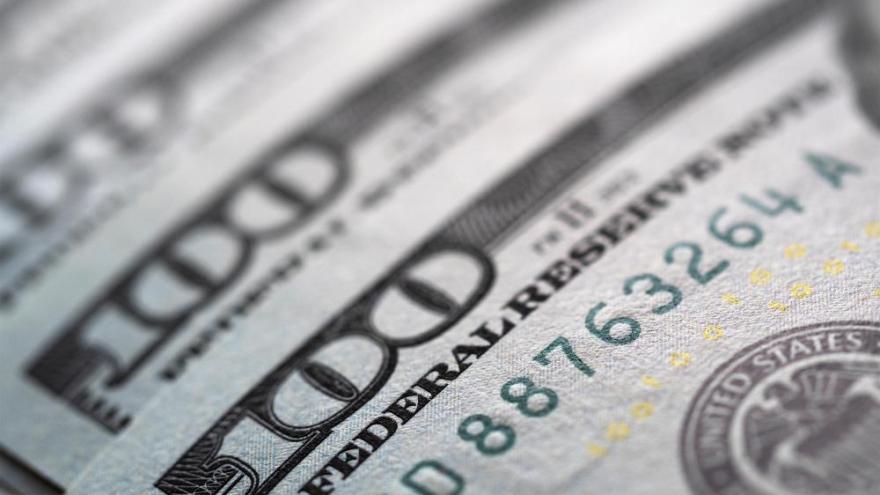 The new $300 weekly federal unemployment benefits start to reach Americans in need. A photo illustration of US 100 dollar bills in the Ukraine on July 9, 2020.

(CNN) -- Jobless Americans in many states are starting to see heftier unemployment checks, thanks to the $900 billion relief package Congress approved in late December.

But many whose benefits ran out last year will have to wait for their payments to restart. And freelancers, independent contractors and certain people who can't work because of coronavirus restrictions will have to provide more proof of employment when filing new applications or continuing their claims.

The new congressional relief deal provides a $300 weekly federal enhancement in benefits through March 14. And it extends by 11 weeks the two pandemic programs that were created in the $2 trillion CARES Act in March and were set to expire at the end of 2020.

The Pandemic Unemployment Assistance program expanded jobless benefits to gig workers, freelancers, independent contractors, the self-employed and certain people affected by the coronavirus. The Pandemic Emergency Unemployment Compensation program provided an extra 13 weeks of payments to those who exhaust their regular state benefits.

Both programs will close to new applicants on March 14, but continue through April 5 for existing claimants who have not yet reached the maximum number of weeks.

The extension of benefits comes as the nation's jobs recovery has hit a wall. First-time unemployment claims soared last week, with 965,000 people filing for benefits, substantially higher than the week before. And the economy lost 140,000 jobs last month, the first monthly decline since April.

About half of states should be paying the $300 weekly boost by the end of this week, said Michele Evermore, senior policy analyst at the National Employment Law Project. That's in line with experts' projection that it would take two to three weeks for many state agencies to reprogram the new measures into their systems.

Several states, including New York and California, moved quickly to put parts of the new law in place. The California Employment Development Department, for instance, has paid a total of $434 million in enhanced federal payments to more than 1 million claimants, as of Tuesday.

In Georgia, nearly 167,000 out-of-work residents received their newly extended pandemic benefits and almost 300,000 jobless claimants got the extra $300, as of early January, the state agency said.

However, more than 239,000 Georgians who exhausted pandemic benefits on or before December 26 will have to wait a few more weeks to start the 11-week extension, though payments will be retroactive.

"We're pushing as quickly as we possibly can," said Kersha Cartwright, an agency spokeswoman.

In other states, unemployed residents have yet to get the benefits in the relief package.

Laid-off Ohioans, for instance, can't submit either new Pandemic Unemployment Assistance applications or ongoing weekly claims at the moment. The state Department of Job and Family Services expects those who were already approved to be able to file by the third week of January. And it expects to start issuing the $300 benefit by then too.

New requirements for some filers

The latest relief package requires those seeking Pandemic Unemployment Assistance benefits to submit additional paperwork that substantiates that they had a job or were self-employed.

Last year, state agencies could simply accept attestations from claimants about their employment and income. But lawmakers tightened the rules partly because the program, which opened up the unemployment system to many Americans who had never been eligible, has been contending with widespread fraud.

The jobless who apply for Pandemic Unemployment Assistance benefits before January 31 and receive a payment on or after December 27 must provide documentation to their state agency within 90 days, according to the US Department of Labor. Those who file a new application on or after January 31 must submit the paperwork within 21 days.

Oregon, for instance, is still waiting for more information about the new required documentation, among other program changes. The state agency doesn't yet know when it will start sending payments to people with new pandemic unemployment claims or to those whose benefits ran out last year.

States have some flexibility in the documentation requirements and the deadlines, Evermore said. However, this could broaden the disparity between states, with some instituting strict guidelines and others less so.

In Georgia, the state agency is still determining the best way for jobless residents to fulfill the documentation requirements, Cartwright said. The new rules place a big burden on state agencies to both collect and verify the paperwork, she said.

"It will slow everything down for everyone," Evermore said.