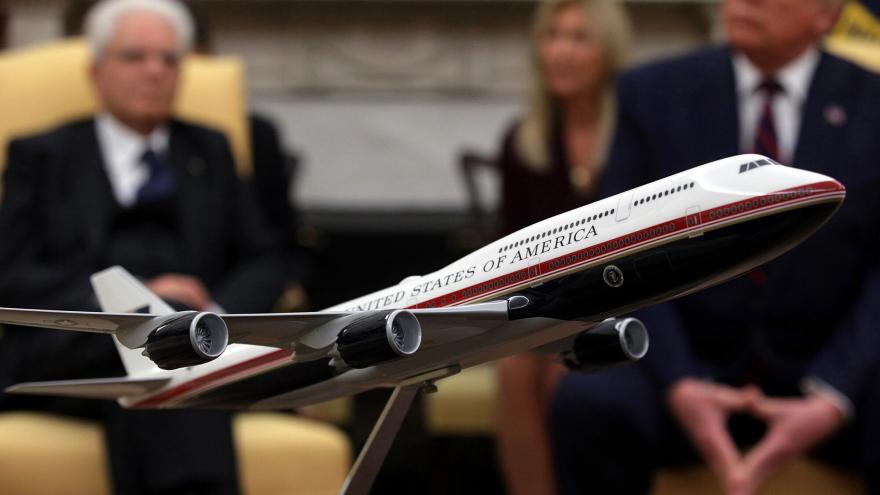 Former President Donald Trump's proposed paint scheme for Air Force One is no longer under consideration due to cost and engineering concerns, an administration official confirms to CNN.

(CNN) -- Former President Donald Trump's proposed paint scheme for Air Force One is no longer under consideration due to cost and engineering concerns, an administration official confirmed to CNN.

"The Trump paint scheme is not being considered because it could drive additional engineering, time and cost," the official told CNN.

Politico was first to report that the Trump-proposed paint scheme had been scrapped.

The decision came after a study showed issues with the proposal, a source familiar with the situation said.

The former President proposed giving Air Force One a makeover for the first time since President John F. Kennedy was in the White House. Trump wanted to replace the light blue stripe on Air Force One with a red, white and dark blue palette.

The dark blue posed challenges to the military planes' sophisticated electronics system that ensures the President can stay in secure communication with officials on the ground.

"The paint scheme in question was one of many possible livery colors proposed," an Air Force spokesperson told CNN earlier this month. "Further analysis concluded darker colors, among other factors, on the underside of the VC-25B aircraft might contribute to temperatures exceeding the current qualification limits of a small number of components."

The Government Accountability Office said in recent report that the planes undergo a comprehensive series of tests as part of the multi-year process of upgrading two standard 747s.

The decision to scrap the Trump-ordered paint job for two new Air Force One jets currently being built by Boeing comes amid a list of other costly construction delays that have brought the planes over budget.

Boeing had previously disclosed it was having trouble finding enough workers with sufficient security clearance to work on the high-tech military planes, especially when Covid-19 cases caused staffing shortages.

The airplane builder also had a dispute with a subcontractor that was working on the interior of the new jets. That contractor was replaced, further setting back progress. On a call with analysts in April, Boeing CEO David Calhoun said the $3.9 billion contract that Boeing signed to build the planes was a mistake for the company, given the losses it is incurring. He said the 2018 deal with the Air Force included "a very unique set of risks that Boeing probably shouldn't have taken."

Trump was particularly hands-on about the Air Force One agreement, meeting with Boeing executives at the White House to seal the deal. He also shared drawings and a miniature model of the proposed jet with the press from the Oval Office.

Boeing made the deal for the jets in 2018 after Trump publicly criticized the program's costs, writing "Cancel order!" and amid Trump's tough rhetoric on China that risked consequences for Boeing and other US exporters.

The added delays could push back deliveries of the new jets to 2026, according to Boeing and the GAO's report. That's beyond the planned retirement date of the two 1990 Boeing-built jets now in use as Air Force One, which had been set to be replaced by 2025.