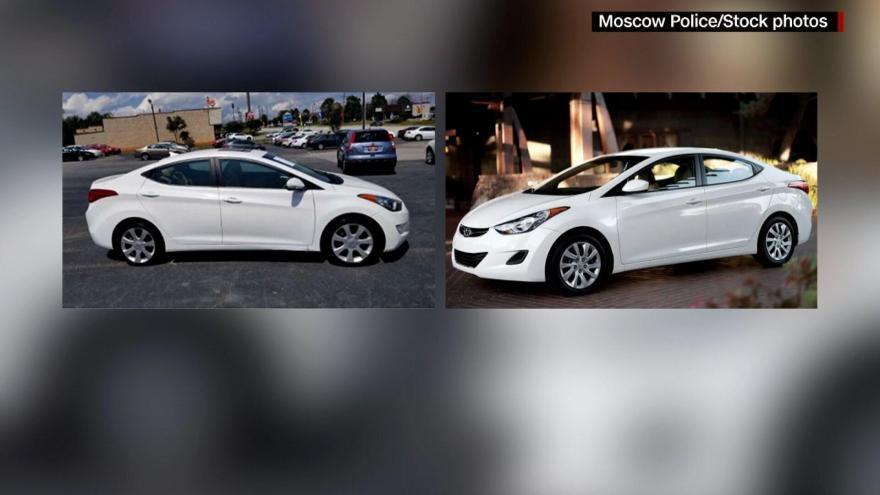 A 2011-2013 Hyundai Elantra was spotted "in the immediate area" of the off-campus home where the students were stabbed to death in the early morning hours of November 13, Moscow Police said in a statement Wednesday.

(CNN) -- Investigators in the killings of four University of Idaho students are searching for at least one person they believe was inside a white sedan seen near the crime scene around the time of the deaths last month, police said Wednesday.

A 2011-2013 Hyundai Elantra was spotted "in the immediate area" of the off-campus home where the students were stabbed to death in the early morning hours of November 13, Moscow Police said in a statement Wednesday.

Information about the vehicle came from the thousands of tips police have received in the case, which has appalled the small college town of Moscow, Idaho.

"Investigators believe the occupant(s) of this vehicle may have critical information to share regarding this case," the police statement said, noting it had an unknown license plate.

The students -- Kaylee Goncalves, 21; Madison Mogen, 21; Xana Kernodle, 20; and Kernodle's boyfriend, Ethan Chapin, 20 -- were killed just days before the school's Thanksgiving break. They were all stabbed multiple times and were likely asleep when the attack began, a coroner has said.

Nearly a month after the quadruple homicide, authorities have not named a suspect or located a weapon, which they believe to be a knife.

Still, investigators maintain they have made progress but cannot share details as that could compromise the investigation.

"We're continuously making progress," Idaho State Police spokesperson Aaron Snell told CNN. "But this is a criminal investigation, and as we make progress, we can't always provide that information."

Investigators are working through more than 6,000 tips they have received over the course of the investigation so far. "We have quality information that we're working on," said Snell.

On Wednesday, police began the process of returning some of the victims' belongings to their families.

"It's time for us to give those things back that really mean something to those families and hopefully to help with some of their healing," Moscow Police Chief James Fry said Tuesday in a brief video statement.

"I'm a dad, I understand the meaning behind some of those things," Fry said.

The items removed from the house where the four students were killed are "no longer needed for the investigation," police said.

As they work to figure who killed the students, police have built a timeline of what they were doing in the hours leading up to their deaths and what happened before police were called.

All four had been out enjoying a typical weekend night -- two were at a bar in downtown Moscow while the other two were at a fraternity house, investigators have said. They all returned to the home by 2 a.m.

Later in the morning, two surviving roommates "summoned friends to the residence because they believed one of the second floor victims had passed out and was not waking up," police said in a release.

Just before noon, a person called 911 from the house using one of the surviving roommates' phones.

Two of the victims were found by responding officers on the second floor and two others were on the third floor. There were no signs of sexual assault, police said. Authorities also did not see signs of forced entry or damage.

Detectives do not believe the surviving roommates were involved in the killings, police have said.