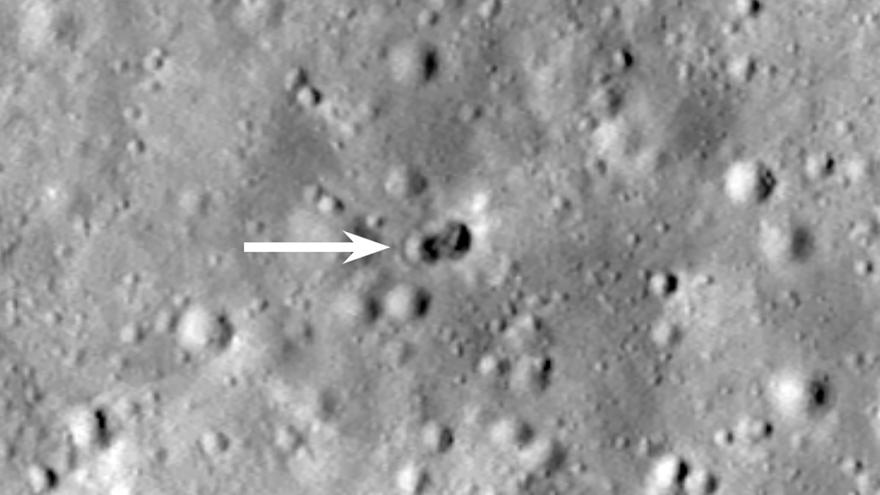 (CNN) -- The moon has a new double crater after a rocket body collided with its surface on March 4.

New images shared by NASA's Lunar Reconnaissance Orbiter, which has been circling the moon since 2009, have revealed the location of the unusual crater.

The impact created two craters that overlap, an eastern crater measuring 59 feet (18 meters) across and a western crater spanning 52.5 feet (16 meters). Together, they create a depression that is roughly 91.8 feet (28 meters) wide in the longest dimension.

Although astronomers expected the impact after discovering that the rocket part was on track to collide with the moon, the double crater it created was a surprise.

Typically, spent rockets have the most mass at the motor end because the rest of the rocket is largely just an empty fuel tank. But the double crater suggests that this object had large masses at both ends when it hit the moon.

The exact origin of the rocket body, a piece of space junk that had been careening around for years, is unclear, so the double crater could help astronomers determine what it was.

The moon lacks a protective atmosphere, so it's littered with craters created when objects like asteroids regularly slam into the surface.

This was the first time a piece of space junk unintentionally hit the lunar surface that experts know of. But craters have resulted from spacecraft being deliberately crashed into the moon.

For example, four large moon craters attributed to the Apollo 13, 14, 15 and 17 missions are all much larger than each of the overlapping craters created during the March 4 impact. However, the maximum width of thenew double crater is similar to the Apollo craters.

Bill Gray, an independent researcher focused on orbital dynamics and the developer of astronomical software, wasfirst to spot the trajectory of the rocket booster.

Gray had initially identified it as the SpaceX Falcon rocket stage that launched the US Deep Space Climate Observatory, or DSCOVR,in 2015 but later said he'd gotten that wrong and it was likely from a 2014 Chinese lunar mission -- an assessment NASA agreed with.

However, China's Ministry of Foreign Affairs denied the booster was from its Chang'e-5 moon mission, saying that therocket in question burned up on reentry to Earth's atmosphere.

No agencies systematically track space debris so far away from Earth, and the confusion over the origin of the rocket stage has underscored the need for official agencies to monitor deep-space junk more closely, rather than relying on the limited resources of private individuals and academics.

However, experts say that the bigger challenge is the space debris in low-Earth orbit, an area where it can collide with functioning satellites, create more junk and threaten human life on crewed spacecraft.

There are at least 26,000 pieces of space junk orbiting Earth that are the size of a softball or larger and could destroy a satellite on impact; over 500,000 objects the size of a marble -- big enough to cause damage to spacecraft or satellites; and over 100 million pieces the size of a grain of salt, tiny debris that could nonetheless puncture a spacesuit, according to a NASA report issued last year.