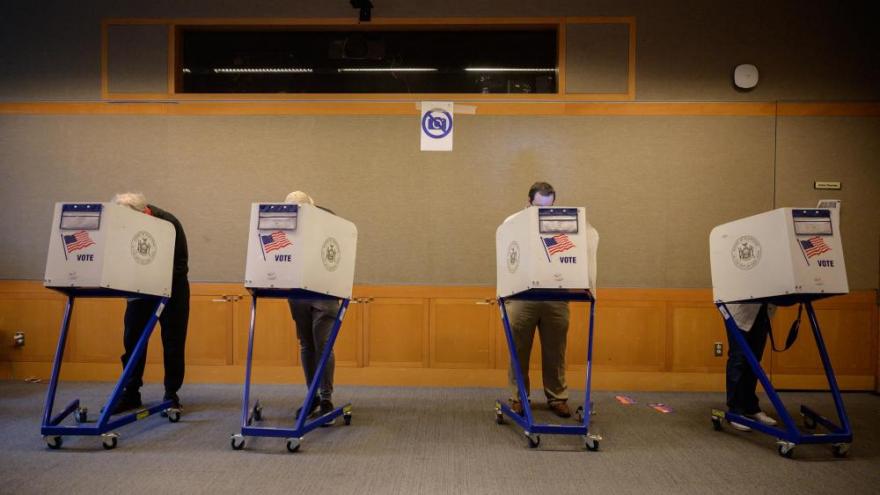 Voters stand in booths at a voting station at the Metropolitan Museum of Art (MET) during the mayoral election process in New York on June 12.

In a vote of 33 to 14, the Democrat-controlled city council passed the measure known as "Our City, Our Vote."

Under the legislation, noncitizens who have lived in the city for at least 30 days and are legal permanent residents in the US -- including green card holders, individuals with workers permits and DACA holders -- will be allowed to vote in city elections, including mayor, public advocate, borough president and city council.

Councilman Ydanis Rodriguez, the prime sponsor of the legislation and an immigrant from the Dominican Republic, told CNN it's about championing the issue of "no taxation without representation."

"But the constitution of New York State and the New York City Charter is a live document that provides the opportunity for us to always look to make it better. I think that today we were able to make that important change that recognizes the contributions of immigrants," Rodriguez told CNN after the vote, adding that his own background as a green card holder from 1983 to 2000 inspired his push for passage of the measure.

Before the vote, some members argued that it should be delayed, citing legal concerns about whether the city could make such a change. That motion, however, was defeated and the council moved forward on the measure.

Other council members brought up concerns regarding the impact the new bill would have on Black voters.

"Where do African American voters fit in," said Majority Leader Laurie Cumbo, a Democrat, ahead of the vote. "This particular legislation is going to shift the power dynamics in New York City in a major way and we do not have the numbers or the information to know how that is going to impact African American communities who have been the most vulnerable in their existence in New York."

Cumbo said that the bill would be a "win for the Dominican Republican" and voiced concern that Latino voters could vote "Republican" once given the right to vote.

The top five countries of birth for immigrants in the city are the Dominican Republican followed closely by China and then Mexico, Jamaica and Guyana, according to the most recent 2019 report on the immigrant population by the Mayor's Office of Immigrant Affairs.

A handful of jurisdictions in the US allow noncitizens to vote, including nine Maryland cities, San Francisco and two Vermont towns -- Winooski and Montpelier.

Noncitizen voting legislation is being considered in Massachusetts, Illinois and the District of Columbia.

New York City has nearly 800,000 noncitizens, according to Rodriguez's office. Advocates of the bill say its about allowing everyone to participate in the democratic process.

"This is set to be a transformative piece of legislation that will really ensure that all New Yorkers -- noncitizen New Yorkers who live here, who are raising children here, who shop in our stores, who own small businesses -- have the opportunity to have a say, in our democracy. We think that we all will be better off when people who are invested in this city are able to participate in our democracy," Anu Joshi, vice president of policy at New York Immigrant Coalition, told CNN.

The legislation is set to go into effect January 2023.

"I understand if folks say, hey, I'm somewhere on the pathway to citizenship, I'd like to be more involved. I respect that. I do understand that impulse," de Blasio said at a news conference late in late November when expressing reservations about the bill. "But I also have feelings about the value of citizenship and wanting to encourage people to become citizens fully, and there's a lot of people who do not pursue full citizenship, even though they can, and that to me is an issue."

Others have argued that voting is a right that should be extended only once a person becomes a citizen.

"I fully support our immigrant community, but I also respect our laws and cherish my privilege as an American citizen to vote," said Bronx Councilman Ruben Diaz, a Democrat, in a statement last week.

The legislation has brought up some legal concerns, most recently from state Republicans who argue that the bill undermines the credibility of local elections and interferes with the integrity of state elections. The New York state GOP has vowed to take action against the legislation, including taking "any legal action necessary to prevent the bill from becoming law."

The measure comes at a time when many Republican-led legislatures have moved to restrict voting access across the country. Nineteen states have passed 33 news laws this year that make it harder to vote, according to an analysis by the liberal Brennan Center for Justice.

Additionally, in 2020, three states -- Alabama, Colorado and Florida -- passed ballot measures that ensure that voting be limited to citizens only.

The Republican National Committee attributed the measure to a "power-hungry Democrat Party."

"American citizens should decide American elections -- full stop," RNC Chairwoman Ronna McDaniel said in a statement after the vote. "Allowing our elections to be decided by foreign citizens is unacceptable, and the RNC is looking closely at our legal options as we continue our fight to protect your ballot."

The RNC filed a lawsuit in September against Winooski and Montpelier, Vermont, over letting noncitizens vote.

This story has been updated with comment from the RNC.