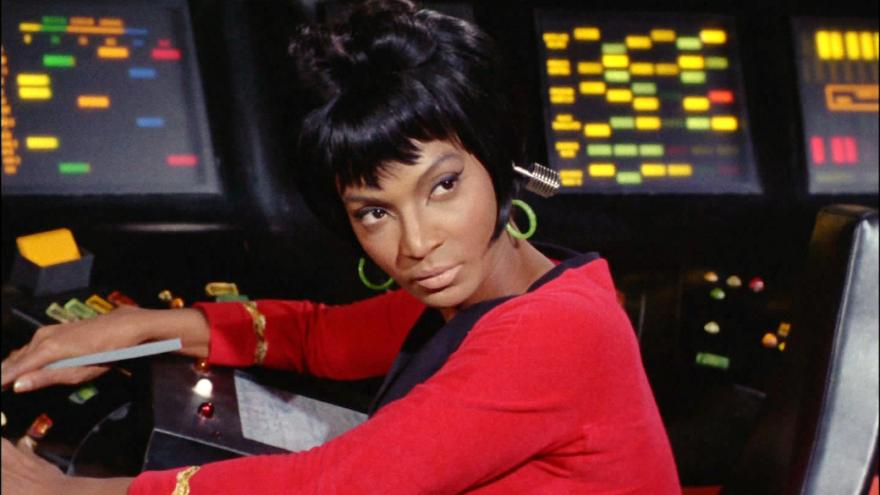 (CNN) -- Actress and singer Nichelle Nichols, best known for her groundbreaking portrayal of Lt. Nyota Uhura in "Star Trek: The Original Series," has died at age 89, according to a statement from her son, Kyle Johnson.

"Last night, my mother, Nichelle Nichols, succumbed to natural causes and passed away. Her light however, like the ancient galaxies now being seen for the first time, will remain for us and future generations to enjoy, learn from, and draw inspiration," Johnson said in a statement shared to Nichols' official site on Sunday. "Hers was a life well lived and as such a model for us all."

Nichols portrayed communications officer Lt. Nyota Uhura in the "Star Trek" TV series and many of its film offshoots.

When "Star Trek" began in 1966, Nichols was a television rarity: a Black woman in a notable role on a prime-time television series. There had been African-American women on TV before, but they often played domestic workers and had small roles; Nichols' Uhura was an integral part of the multicultural "Star Trek" crew.

The Rev. Martin Luther King Jr. called it "the first non-stereotypical role portrayed by a Black woman in television history."

Nichols is widely known for participating in one of the first interracial kisses on US television when her character kissed James T. Kirk, portrayed by White Canadian actor William Shatner. In an interview with CNN in 2014, Nichols said the kiss scene "changed television forever, and it also changed the way people looked at one another."

After "Trek's" three-season run, Nichols dedicated herself to the space program. She helped NASA in making the agency more diverse, helping to recruit astronauts Sally Ride, Judith Resnik and Guion Bluford, among others.

"I shall have more to say about the trailblazing, incomparable Nichelle Nichols, who shared the bridge with us as Lt. Uhura of the USS Enterprise, and who passed today at age 89," wrote Takei on Twitter. "For today, my heart is heavy, my eyes shining like the stars you now rest among, my dearest friend."

"We lived long and prospered together," he added with a photo of the pair making the iconic Vulcan salute.