Nike backs Naomi Osaka after she withdraws from French Open 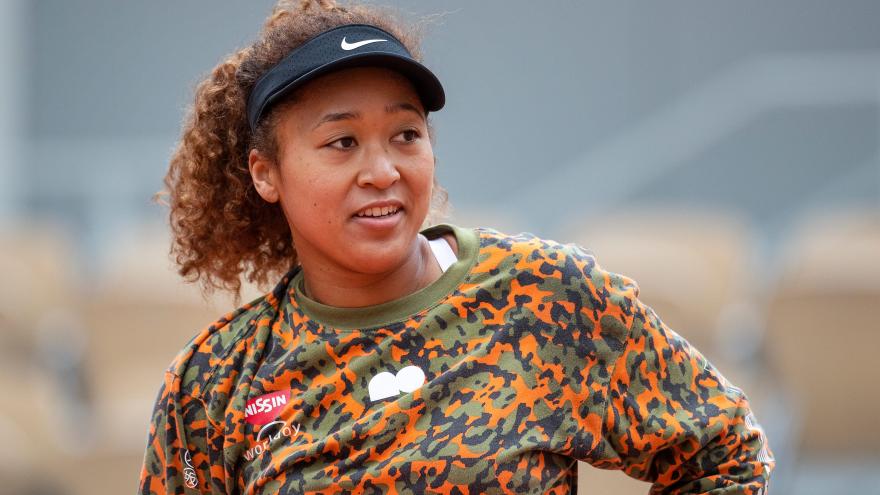 (CNN) -- Nike and other major sponsors have come out in support of tennis star Naomi Osaka following her decision to withdraw from the French Open.

The sports apparel giant — who signed a sponsorship deal with Osaka in 2019 — applauded the athlete in a statement on Monday for opening up about her struggle with depression.

"Our thoughts are with Naomi. We support her and recognize her courage in sharing her own mental health experience," Nike said.

Osaka's decision to pull out of the competition came after the tournament, also called Roland Garros, fined her $15,000 for not speaking to the media following her first round match on Sunday.

Citing mental health reasons, the four-time major champion announced on Twitter last Wednesday that she would not participate in any news conferences at the tournament. Announcing her subsequent decision to withdraw, she revealed that she has "suffered long bouts of depression" since winning her first Grand Slam title in 2018.

Roland Garros said in a statement that Osaka had failed to honor her contractual media obligations and was fined under the tournament's Code of Conduct. The statement added that Roland Garros had "tried unsuccessfully to speak with her to check on her well-being" and that she was reminded that "rules should apply equally to all players."

Other sponsors issued statements in support of Osaka, who was born in Japan and grew up in the United States.

"Naomi Osaka's decision reminds us all how important it is to prioritize personal health and well-being," Mastercard said in a statement. "We support her and admire her courage to address important issues, both on and off the court."

Osaka became the first number one tennis player to joinMastercard'sroster of global ambassadors in 2019.

Swiss luxury watchmaker TAG Heuer said that it supports its brandambassadors "in triumph but also during challenging periods."

"Naomi is going through difficult times and we truly hope to see her back soon. She is a great champion and we are convinced that she will come out of this period stronger, be it professionally or personally," the company said in a statement.

Nissin Foods, a Japanese company known for its instant noodles, also released a message of solidarity.

"We pray for Ms Naomi Osaka's earliest recovery, and wish her continue success," a company spokesperson said in a statement.

Nissan, the Japanese automaker, also threw its weight behind Osaka. "We support the right of our ambassadors to express themselves and stand by her decision," the company said in a statement.

All Nippon Airways, a Tokyo-based airline, said that it, too, would continue to support Osaka "as a sponsor."

Workday, the enterprise software firm, lauded Osaka for speaking out about her struggles.

"Anyone who has been impacted by mental health knows asking for help is hard," Christine Cefalo, chief marketing officer, said in a statement. "We applaud Naomi Osaka for prioritizing self care and stand by her — and can't wait to see her on the courts again soon."

Sweetgreen, a US restaurant chain of which Osaka is a brand ambassador and investor, said: "Our partnership with Naomi is rooted in wellness in all its forms. We support her in furthering the conversation around mental health and are proud to have her as part of the sweetgreen team."

Japanese television broadcaster WOWOW, though, said it was "not in the position to comment [on] Ms. Osaka's withdrawal by her personal issue."

The Japanese television broadcaster pointed out that "unlike Nissin, ANA and other Japanese companies which endorse Ms. Osaka, our company is a broadcaster which delivers her plays on tennis tour to Japanese viewers." It said it has shown grand slam tournaments, including Roland Garros, for more than two decades.

"We sincerely hope that she could overcome it and come back on court as soon as she can, and every Japanese [person expects] it," the broadcaster said.