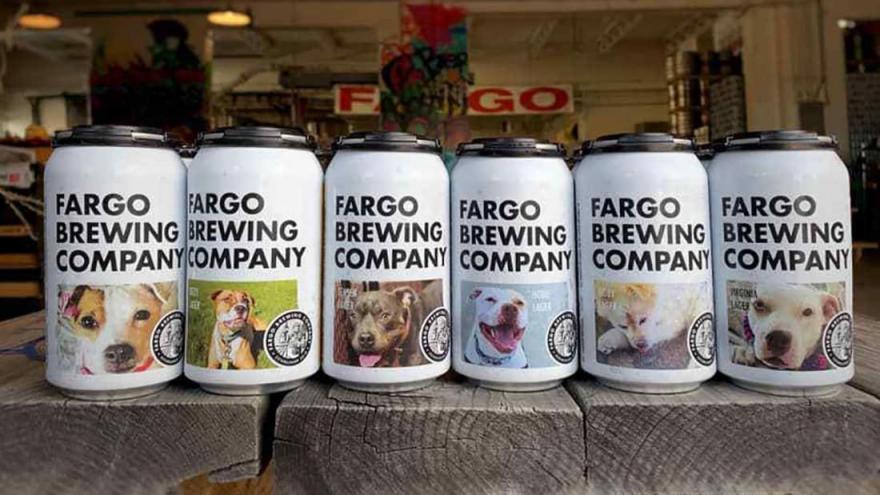 (CNN) -- These rescue dogs are having a hard time getting adopted. But thanks to a local brewery in Fargo, North Dakota, they are now featured on beer cans in hopes to find them a forever home.

Fargo Brewing Company partnered with 4 Luv of Dog Rescue, a local rescue group, to shine light on some of their harder to place dogs they dubbed "One-der" dogs.

"Our One-der dogs are dogs that will live their best life in a home by themselves and there's no other pets," Jerad Ryan, volunteer at 4 Luv of Dog, told CNN affiliate KVRR. "So, they can be a little bit tougher to find homes for, foster homes, that type of thing."

This creative idea comes during a time that many shelters across the US are at capacity. In Atlanta, LifeLine Animal Project waved their pet adoption fees at two shelters because of the influx of animals.

Ryan told CNN that he has volunteered with the North Dakota rescue group for over four years, and the "One-der" dogs have a special place in his heart, especially Bizzy who he fostered.

"I was always trying to think of ways to promote her and the other less fortunate dogs in our rescue," Ryan said. "At my job at Northern Plains Label we produce labels for breweries, and I just had the light bulb style idea to feature the dogs on beer cans."

The six chosen pups featured on the beer cans are Nyx, Bizzy, Jensen, Hobie, Moby and Virginia. The community was invited to a special event Monday night at the brewery where they could pick up a six pack of the Fargo Original Larger for $9 and meet one of the pups up for adoption.

"We hope that having these dogs featured on the cans will help raise awareness and shine a spotlight on them where they might normally have been overlooked," Fargo Brewing Company told CNN in a statement.

Ryan said that the response from the community has been amazing and heartwarming.

"This really has been great exposure for these harder to adopt dogs, and I would be surprised if this doesn't lead to an adoption or two."

The Nebraska Humane Society and the Louisiana SPCA have also reduced adoption fees to help lower the number of animals in the shelter.