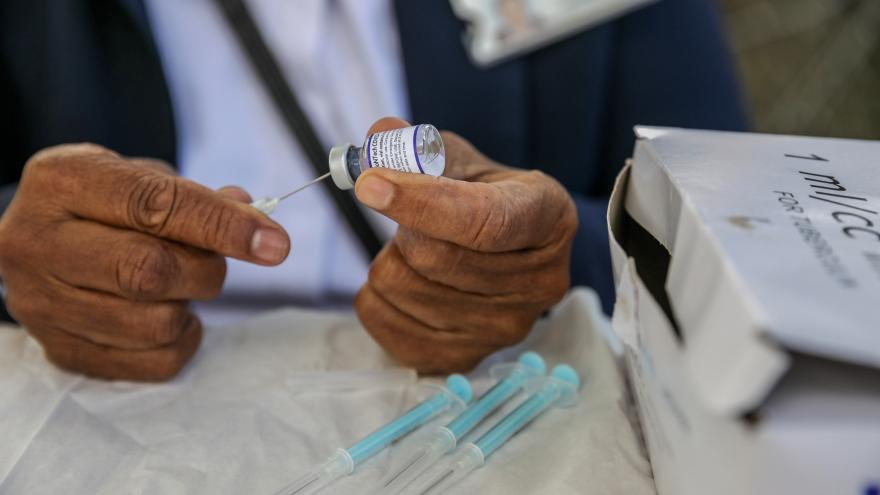 (CNN) -- The Omicron coronavirus variant partly escapes the protection offered by the Pfizer vaccine, but people who have been previously infected and then vaccinated are likely to be well protected, researchers working in South Africa reported Tuesday.

It's the first experiment to directly look at how the Omicron virus might behave in vaccinated people.

Tests in lab dishes using samples from 12 people who had been fully vaccinated with Pfizer's vaccine showed the Omicron variant could evade the immune protection built by the vaccine -- but not completely.

"There is a very large drop in neutralization of Omicron by BNT162b2 [Pfizer/BioNTech] immunity relative to ancestral virus," Sigal said on Twitter.

"I thought this news was very positive. I expected worse," Sigal said in a telephone interview. The mutations that characterize the Omicron variant, he said, looked like they could allow it to evade the immunity offered by vaccines to a greater extent.

But the experiment indicates it doesn't. "This is not a variant that has completely escaped," he said. "It certainly escapes. It is certainly bad. But it looks to me like there are ways of dealing with it."

Sigal's team used human lung cells for the tests. Blood from the six volunteers who had been infected and then vaccinated was better able to neutralize the virus, they reported in a study submitted to an online preprint site. It has not been peer reviewed.

The study does not reflect actual infection with the virus.

It found a 41-fold decrease in the levels of neutralizing antibodies against Omicron in some of the samples, compared to those generated against one of the earlier strains of the virus -- although it's not clear how that might translate into a reduction in real-life protection.

That number will almost certainly change as more and more samples are tested, Sigal said. There's a lot of variation from person to person when it comes to antibodies generated by vaccination.

The researchers noted that the Beta variant, which dominated in South Africa until recently, also evades immune protection. "The results we present here with Omicron show much more extensive escape," they wrote.

While the team did not test the Omicron virus variant against the blood of people who had received vaccine boosters, Sigal believes people who have been fully vaccinated and then boosted will be well protected from severe disease caused by the Omicron variant.

"My impression is if you get a booster you are protected, especially against severe disease," he said. "It took a hit -- a bigger hit than we have seen before -- but it didn't take it down to levels that are insubstantial."

Other studies looking at immune protection against variants have shown many of the Covid-19 vaccines create very strong immune protection that provides a cushion of extra immunity -- so that even if a variant escapes some of the immunity, there is plenty left to shield people from severe disease. That appears to also be the case with Omicron, Sigal said.

Importantly, the virus still attacks human cells through the same route it always has -- a molecular doorway called the ACE2 receptor.

"Imagine if this virus had found a different receptor to bind to?" Sigal asked. "Then all of our vaccines would have been trash," he added.

Sigal is quick to say this is a very early experiment involving just 12 people and samples of live virus grown in a hurry. "We went from getting the samples to doing the experiments to getting something out in just a couple of weeks. It's crazy," he said.

The team plans to test more samples and to test them against different vaccines, including the Johnson & Johnson vaccine, which was also deployed widely in South Africa.