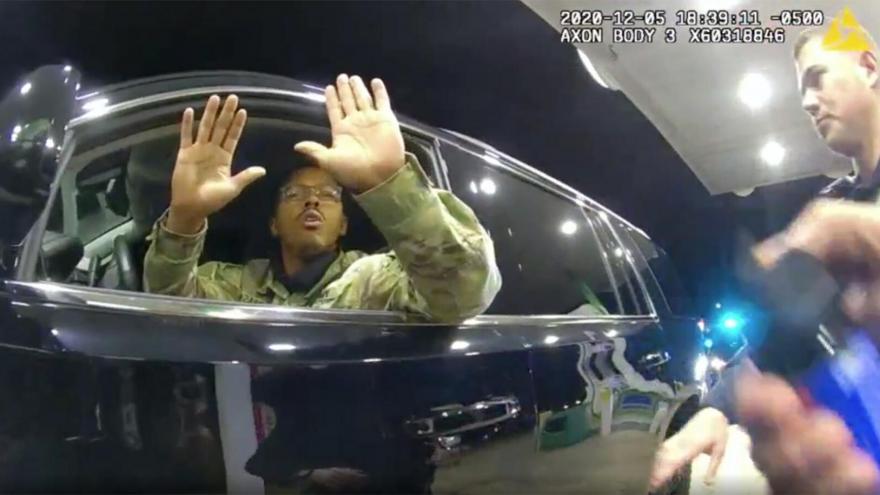 Caron Nazario is seen in this still image from body camera footage holding his hands up before a police officer pepper sprays him during a traffic stop last December. One of the police officers accused of using excessive force has been fired following the incident, the town manager said on April 11.

(CNN) -- One of the police officers accused of using excessive force in a Virginia traffic stop has been fired following an investigation, the town manager said late Sunday.

The Windsor officers pointed guns at, pepper sprayed and pushed a Black US Army officer to the ground during the traffic stop last December. During the stop, the police officers believed the Army officer was missing a license plate on his new SUV.

Second Lt. Caron Nazario, who is Black and Latino, is suing over the incident, claiming the two officers violated his rights guaranteed under the First and Fourth Amendments.

One of the officers, Joe Gutierrez, has been fired, Town Manager William Saunders confirmed to CNN. The other officer, Daniel Crocker, is still employed by the police department, Saunders said.

A statement from the town didn't give the date of Gutierrez's firing.

Sergeant Major of the Army Michael Grinston tweeted he was concerned by the video and that Nazario "represented himself and our Army well through his calm, professional response to the situation. I'm very proud of him."

Grinston continued: Situations like this are what I want Soldiers to discuss. This is the reality that some of our Soldiers still face. As a Leader, you should know that and be willing to have conversations about how events like this impact your teams."

CNN has tried unsuccessfully to reach the Windsor officers for comment. It's unclear whether they have legal representation that would comment. CNN has also reached out to Windsor Police Chief Rodney Riddle for comment.

The town launched an investigation because of the use of force in the incident.

"At the conclusion of this investigation, it was determined that Windsor Police Department policy was not followed. This resulted in disciplinary action, and department-wide requirements for additional training were implemented beginning in January and continue up to the present. Since that time, Officer Gutierrez was also terminated from his employment," a statement released by the town Sunday said.

Footage of the incident has drawn widespread condemnation, including from Gov. Ralph Northam, who called it "disturbing." He said he was "directing the Virginia State Police to conduct an independent investigation."

"Our Commonwealth has done important work on police reform," Northam tweeted Sunday, "but we must keep working to ensure that Virginians are safe during interactions with police, the enforcement of laws is fair and equitable and people are held accountable."

Attorney General Mark Herring sent a request for information to the Windsor Police Department, stating he is "deeply concerned" about the traffic stop.

"The officers' conduct that we saw in the videos were appalling, it was dangerous and it is unacceptable," Herring told CNN's Erin Burnett. "People of color continue to experience brutality and being pepper sprayed -- even killed -- at the hands of law enforcement and it's got to stop."

Herring's Office of Civil Rights is requesting any records or other documentation the Windsor Police Department created regarding the incident, as well as personnel records for the two officers. Herring is also requesting WPD policies related to use of force, traffic stops, de-escalation, and engaging with members of the public, along with complaints received by the WPD related to use of force for the last 10 years.

"Nothing that I saw in the video would have justified the actions that the officers took," Herring said. "It was Lt. Nazario who was the calm one, who was the responsible one. Under no reasonable use of force policy would any of this conduct be permissible."