Only 1 person RSVP'd to a party for a boy with autism, so a high school football team showed up to celebrate 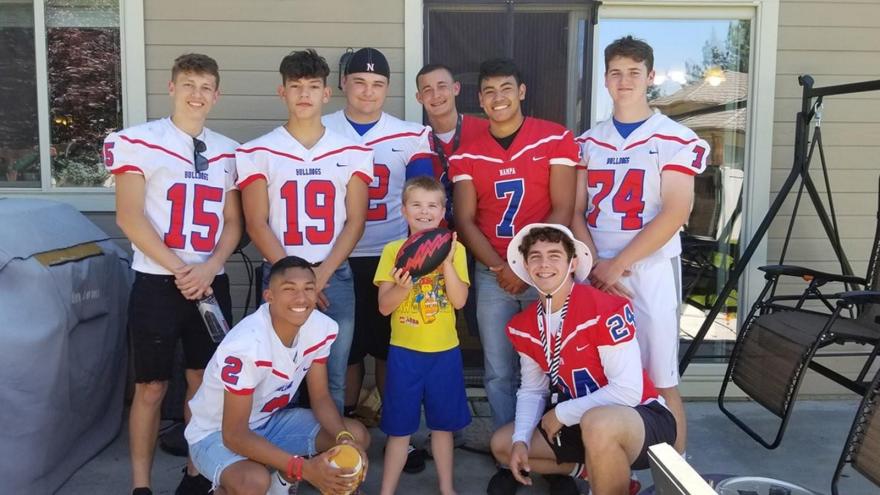 Players from the Nampa High School football team with Christian Larsen at his ninth birthday party.

(CNN) -- Christian Larsen begged his mother, Lindsay, to throw him a ninth birthday party so he could invite all of his friends. Finally, she gave in, sending out invitations -- and waiting.

But only one person RSVP'd.

Christian, who has autism, attends Hillsdale Elementary in Meridian, Idaho. At the picnic marking the end of the school year, Larsen says, she saw firsthand how some of the children interacted with her son: either ignoring Christian or telling him no when he asked them to attend his party. It made her think that there might be something more to the lack of responses.

On May 31, Lindsay posted on Facebook about the lack of responses, and her friend Blythe Ben-David stepped in to make a birthday miracle happen.

Ben-David lives in South Texas, far from the Larsen family. She couldn't be there for the party, so she reached out to Dan Holtry, a family friend and the football coach at Nampa High School in Idaho.

"He has always been a great guy, a genuine guy with a big heart," Ben-David wrote of Holtry in an email to CNN. "I knew if anyone could help it would be Dan."

When Ben-David asked Holtry whether he could help, he immediately agreed and went "above and beyond," according to Ben-David.

"The players jumped at the opportunity," Holtry wrote in an email to CNN. "They were ready and willing to celebrate with Christian. Within seconds of a sent text they were 100 percent in. No hesitation whatsoever."

When Christian's party rolled around on June 4, a few classmates, some children from the neighborhood and some family friends showed up. Christian was running around and having a good time when the surprise guests arrived.

Holtry and his players showed up chanting his name.

"The energy became electric and it was amazing to see how they all came together," Larsen wrote in an email. "Christian often plays alone, or wanders off, but with the players there helping organize games, he became part of the action. He was playing alongside his peers, as well as the football players. I think it helped the other young children interact with Christian too."

Holtry and his players stayed until the very end, playing with the children, singing happy birthday and watching Christian open some presents.

"I know that Christian felt amazed and blessed by the turnout," his mother said. "He talked about it for days. One of the best things about his personality, is that he is always looking for the positive. He didn't question why the players were there, he just loved it. He has said multiple times that it was the best birthday ever!"