Origins of plague could have emerged centuries before outbreaks, new study suggests 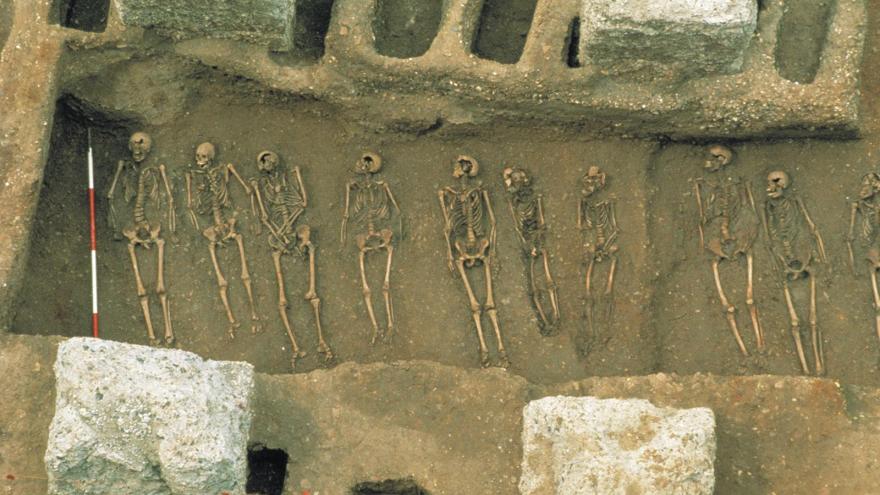 (CNN) -- In the largest DNA analysis of its kind, scientists have found evidence to suggest that historic plague pandemics, such as the Black Death, were not caused by newly evolved strains of bacteria but ones that could have emerged up to centuries before their outbreaks.

The plague-causing bacterium Yersinia pestis is dated to have first emerged in humans about 5,000 years ago. Through animals and trade routes, Y. pestis spread globally over time on multiple occasions, according to a study published Thursday in the journal Communications Biology.

By amassing 601 Y. pestis genome sequences, including modern and ancient strains, researchers from Canada and Australia were able to calculate the time when the bacterial strains likely emerged as a threat. They divided the different strains of the plague bacterium and analyzed each strain population individually.

The strain responsible for the Black Death, which the study says is thought to have begun in 1346, was newly estimated to have diverged from an ancestral strain between 1214 and 1315 — up to 132 years earlier.

The strain of Y. pestis associated with the first plague pandemic was previously recorded as first appearing during the Plague of Justinian, which began in 541. However, the researchers estimated that the strain was already present between 272 and 465 — up to almost 270 years before the outbreak.

"It shows that each major plague pandemic has likely emerged many decades to centuries earlier than what the historical record suggests," study coauthor and evolutionary geneticist Hendrik Poinar, director of McMaster University's Ancient DNA Centre in Canada, told CNN via email Thursday.

He added that the bacterium emerged, created small epidemics and then "for reasons we don't quite understand," such as famine or war, "it takes off."

Origins of the third plague pandemic

The study authors estimated that individually assessed bacterial strains from the third plague pandemic diverged from an ancestral strain between 1806 and 1901, with highly localized plague cases beginning to appear in southern China between 1772 and 1880 and later diverging into various strains that spread globally out of Hong Kong between 1894 and 1901.

The study also found evidence to support recent academic research suggesting that the third and second plague pandemics were not mutually exclusive events, but that the third was partly the continuation or tail end of the second. Despite the pandemics having their own diverse genetic lineages that evolved differently, the third descended directly from the 14th century strain that caused the second.

Poinar called this finding significant because "it takes into account that most of the history of this bacterium has been a Eurocentric view, so while plague supposedly disappeared from Europe in the 18th (century), it continued to rage in the Ottoman Empire and throughout the Middle East and likely North Africa."

However, even with so many sequences of the plague bacterium, researchers were not able to determine the path of the global spread of the plague.

A lot of the genetic samples come from Europe. For example, the emergence of the bacterium in Africa has led to 90% of all modern plague cases occurring on the continent, yet there are no ancient sequences from the region, which is represented by just 1.5% of all genome samples — making it difficult to date the appearance of Y. pestis in Africa.

There is also far less surviving historical evidence from the second plague pandemic to help estimate its geographic origins compared with the third, with the earliest textual evidence of the pandemic in Europe coming from the Black Death in 1346, the study authors said. The researchers estimated that the second pandemic originated in Russia.

A study published in the journal Nature in June used DNA analysis to find the plague bacterium in three individuals who are dated to have died in 1338 in what's now Kyrgyzstan in Central Asia. It provided evidence that the Black Death came from a strain originating in the area near Lake Issyk-Kul in Kyrgyzstan in the early 14th century.

The latest study concluded that more ancient DNA will be needed to refine current estimates on the early events of the second pandemic.

Via email, Poinar described the strain from Kyrgyzstan as "really fascinating" but said that it "still doesn't sit at the root. So I would guess we're still looking for something a good 20-50 years earlier."

He and the other authors noted that the only way to estimate the evolution of the plague bacterium strains precisely "is with well dated sequences, such as those from skeletal remains at Lake Issyk-Kul."