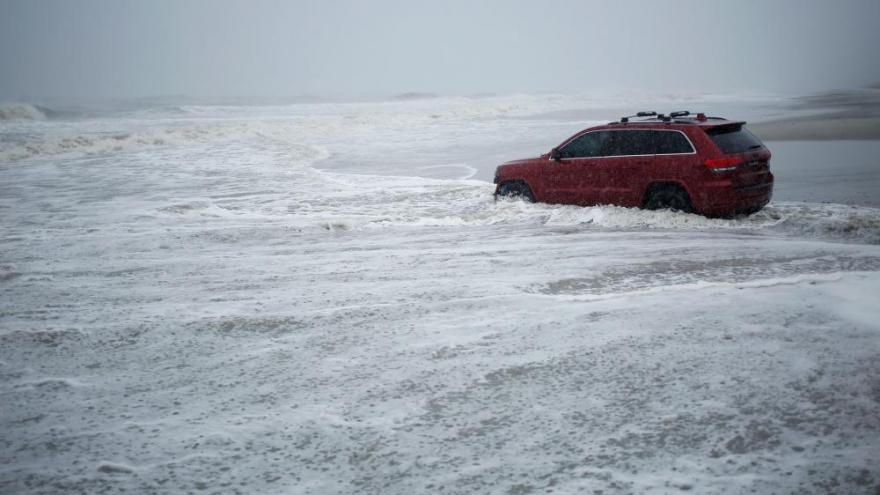 (CNN) -- The owner of the Jeep abandoned on Myrtle Beach during Hurricane Dorian will probably think twice before giving someone his car keys.

The red SUV became a social media sensation Thursday as it was bashed by strong surf whipped up as the hurricane moved past South Carolina and up the Atlantic coast.

People posed for selfies with the Jeep and some even climbed on top of it. One man dressed in black walked solemnly around the vehicle in his flip-flops while playing "Amazing Grace" on the bagpipes.

It turns out the SUV's owner had lent it to his cousin so that guy wouldn't have to ride his motorcycle in the bad weather, the owner told CNN affiliate WMBF.

"He thought it would be cool to go on the beach and take a quick video of the sunrise before the storm came," said the Jeep's owner, who according to the station did not want to be identified publicly. The station confirmed his identity, it said.

So, the owner's cousin "got on the beach and started driving it," the owner told WMBF. "I guess there's that runoff there, and he didn't realize it was in front of him. He was looking out the window when he went off and got stuck, which you can see he actually banged up the bumper a bit."

The cousin tried to get someone to tow the vehicle, but no one would come, said the owner, who didn't find out what happened until police arrived at his house.

"He avoided me for a good hour or two because he didn't know what to say, and then police actually came to the house. And they said, 'Hey, we found your Jeep on the beach.' Then I called (my cousin) and spoke to him and he told me exactly what happened," the Jeep's owner told the station.

The owner hopes the Jeep wasn't totaled, but he thinks it probably was, he said. The surf rose above the Jeep's tires and was strong enough to turn the vehicle.

It appeared to be missing at least part of its front bumper and have a broken window.