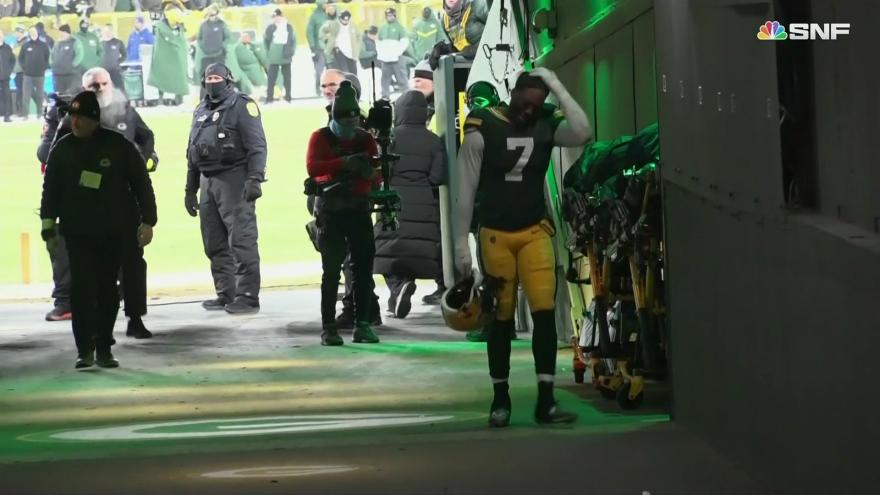 GREEN BAY, Wis. (AP) — Packers linebacker Quay Walker has apologized via social media after getting ejected from Green Bay’s regular-season finale for shoving a Lions team physician who was attending to an injured player.

“I reacted off of my emotions again and take full responsibility of making another stupid decision,” Walker tweeted Monday. “Since then I’ve questioned myself on why did I do what I did when the trainer was doing his job!! I was wrong!!”

The incident occurred Sunday during Detroit’s go-ahead touchdown drive midway through the fourth quarter of a 20-16 Lions victory that prevented the Packers from reaching the playoffs. Walker was close behind two Lions staffers as they attended to Detroit running back D’Andre Swift, Walker’s former Georgia teammate.

Lions team physician Sean Lynch put his left hand on Walker’s right elbow to move him away from the staffers so he could check on Swift as well. Walker then shoved Lynch in the back. Packers rookie defensive tackle Devonte Wyatt – who also played at Georgia with Walker and Swift – later appeared to bump his left shoulder into Lynch’s back but didn’t get penalized.

Cameras showed a visibly frustrated Walker head to the locker room after his ejection.

“I understand I have to face everything that comes with the decision I’ve made and I’m definitely paying for it now,” Walker tweeted. “Also to explain my frustration in the tunnel. I wasn’t upset about being kicked out, I just knew I messed up again and was wrong for what I did and couldn’t believe I did it again. To the Detroit Lions and to the entire training staff, including the person I did that to, I’m sorry.”

The Packers selected both Walker and Wyatt in the first round of the 2022 draft, taking Walker 22nd overall and Wyatt 28th.

This was the second time Walker got ejected from a game in his rookie season. He also was ejected during an Oct. 30 loss at Buffalo after shoving Bills practice-squad tight end Zach Davidson on the sideline.

“We’ve had a guy get ejected twice,” Packers coach Matt LaFleur said after the game. “I don’t think I’ve ever seen that in my career. We’ve got to be much more mentally tough. Any time our guys commit personal fouls, I take that very personally. Because I think that’s always a reflection of myself and the standards that we set for these players. We’ve got to be better, and we’ve got to learn from that because that is unacceptable.”