Parents of Michigan school shooting suspect held on $500,000 bond each after manhunt 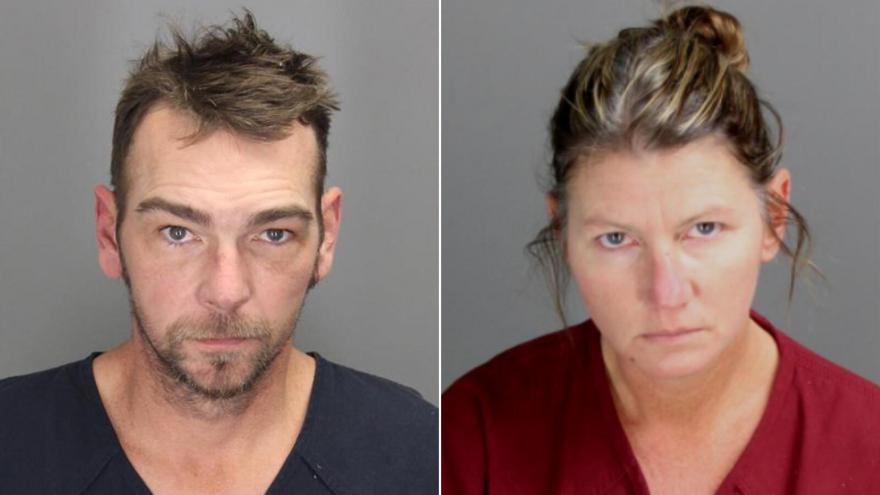 The parents of school shooting suspect Ethan Crumbley were booked early Saturday morning in the same jail where their son is incarcerated, as James and Jennifer Crumbley are listed on the roster of the Oakland County Jail after being apprehended overnight in Detroit as fugitives on charges of involuntary manslaughter.

(CNN) -- The parents of the teen accused in this week's deadly Michigan high school shooting pleaded not guilty to involuntary manslaughter charges Saturday morning, hours after police said they arrested them in a Detroit warehouse following an hours-long search.

A judge in Michigan's Oakland County set bond at $500,000 each for James and Jennifer Crumbley, the parents of Ethan Crumbley, the teen jailed on suspicion killing four schoolmates and wounding seven other people at Oxford High School on Tuesday.

The detained couple, sitting alone in separate rooms, made their arraignment appearance by video conference with the judge, their attorneys and the county prosecutor.

Both spoke little beyond saying they understood each charge -- with Jennifer Crumbley appearing to cry between words -- and pleaded "not guilty" to each.

During the arraignment, their attorneys stressed their clients had fully intended to turn themselves in before authorities arrested them Saturday morning, and denied prosecutors' assertions that their son had unrestricted access to the gun he's accused of using.

James and Jennifer Crumbley had been charged Friday with four counts of involuntary manslaughter over Tuesday's shooting, and were supposed to attend an arraignment Friday afternoon, authorities said.

But they missed the Friday arraignment, making them fugitives and setting off a search for them, authorities said.

Early Saturday, police said they found the couple on the first floor of an industrial or commercial building in Detroit -- some 40 miles south of the Oxford area where they live -- after someone tipped police Friday night that their vehicle was nearby.

"They appeared to be hiding in the building," Detroit Police Chief James White said during a news conference early Saturday. They were "very distressed" after they were detained, the chief said.

White said he didn't know the Crumbleys' intentions, but that "this isn't indicative of turning themselves in, hiding in a warehouse."

White added someone let the couple into the building, and said that person could face charges.

The Detroit Police Department has identified a person who guided the Crumbleys as they parked their vehicle in the back of the building where they were found, a law enforcement official told CNN.

Oakland County Sheriff Michael Bouchard said the person potentially faces "charges for either aiding and abetting or obstruction of justice" as determined by the county prosecutor.

"We believe they were assisted in that location to get there, to get in, and we're gathering that information," Bouchard said in a news conference Saturday afternoon.

Ethan Crumbley was charged Wednesday as an adult with terrorism, murder and other counts in the shooting.

Bouchard said there was clear evidence the shooting was premeditated and that the shooter was "looking forward to it."

Parents' attorney says 'the gun was locked,' and son didn't have free access

Oakland County Prosecutor Karen McDonald has alleged that James Crumbley on November 26 bought the gun at a store in Oxford, and that the parents gave the weapon to their son as an early Christmas present.

During Saturday's arraignment, McDonald said, "It's ... clear from the facts that (Ethan Crumbley) had total access to this weapon," and that the parents "didn't secure (the gun) and they allowed him free access to it."

James Crumbley shook his head as McDonald made both statements.

One of the parents' attorneys, Shannon Smith, countered during the hearing that "the gun was actually locked."

"When the prosecution is stating that this child had free access to a gun, that is just absolutely not true," Smith said. "This court is going to see ... there is far more going on than what this court has been made aware of."

Couple withdrew $4,000 from an ATM on Friday, official told CNN

The defense attorneys and the prosecutor also clashed over whether the couple were fleeing prosecution or intended to turn themselves in before they were arrested.

The US Marshals Service was helping local authorities search for the couple Friday, and had offered a reward of up to $10,000 for information that could lead to their arrest. Authorities publicized a description of their vehicle.

Ultimately, Detroit police made the arrest after a business owner saw a woman standing near "the suspect vehicle" in his parking lot Friday night and called 911, according to a statement to CNN from Oakland County Undersheriff Michael McCabe.

Prosecutors had worried about the couple escaping because they didn't have ties to their community, and officials had trouble locating the Crumbleys once their son was being arraigned, a law enforcement source told CNN on Friday.

The parents also withdrew $4,000 Friday from an ATM in Rochester Hills, about 10 to 15 miles from Oxford, a law enforcement official told CNN.

Law enforcement were tracking the couple's whereabouts by cell phone pings, but that signal had dropped because the couple's cell phones were turned off, the official said.

On Saturday, McDonald cited the ATM withdrawal and "attempts to hide their location" as reasons to set bond at $500,000 each.

"These are not people that we could be assured will return to court on their own," McDonald said.

One of the couple's attorneys had earlier stated that the Crumbleys had left town for their own safety and were returning for their arraignment.

At Saturday's hearing, Crumbley attorney Smith said she and her colleagues "called the prosecutor's office throughout the day (Friday) and never got a call back," and that "we were going to make arrangements to have our clients turn themselves in." Smith also claimed she didn't know the precise time of Friday's arraignment.

"They were scared; they were terrified; they were not at home; they were figuring out what to do, getting finances in order," Smith said Saturday.

By night, the defense attorneys made plans with the Crumbleys to turn them in to authorities Saturday morning, Smith said.

"We did not announce it, because unlike the prosecution, we weren't attempting to make this a media spectacle," she said.

McDonald countered that "these defendants did not need my permission" to turn themselves in.

The couple is being held in the same county jail as their son. All three are kept separated and are closely watched, Bouchard said. There is no indication that they are suicidal, he said.

The arrests come after officials revealed more information Friday regarding the circumstances leading up to the deadly shooting.

Shortly after James Crumbley bought the gun November 26, his son posted a picture of a gun on an Instagram account and captioned it, "Just got my new beauty today. SIG SAUER 9mm" with a heart-eyes emoji, McDonald said.

Jennifer Crumbley also posted about the gun on social media, calling it "his new Christmas present," McDonald continued. And his mother also took him to a shooting range the weekend before the shooting at the school, according to a law enforcement.

On Monday -- the day before the shooting -- a teacher saw Ethan Crumbley searching ammunition on his phone and reported it to school officials, the prosecutor said.

Jennifer Crumbley did not respond to school officials when they called her about that conduct -- but later that day sent a text message to her son saying, "LOL I'm not mad at you. You have to learn not to get caught," McDonald said.

Then on Tuesday -- the day of the shooting -- a different teacher became alarmed after the alleged shooter had a drawing that showed a semiautomatic handgun pointing at the words, "The thoughts won't stop. Help me," McDonald said.

Another section displayed a drawing of a bullet with the words "Blood Everywhere" written above it. Between the drawing of the gun and the bullet is one of a person who seems to have been shot twice and is bleeding, McDonald said.

"Below that figure is a drawing of a laughing emoji," McDonald said.

Also found on the note, according to McDonald: "My life is useless" and "The world is dead."

The parents were called for a meeting in the school with a counselor and their son, who had altered the illustration by scratching out the drawings of the gun and bloody figure, along with the words, according to McDonald.

The parents refused to take their son out of the school, and he was allowed back to class.

Later that day, according to prosecutors, Crumbley opened fire outside a bathroom, aiming at students in the hallway as well as those who were hiding in classrooms.