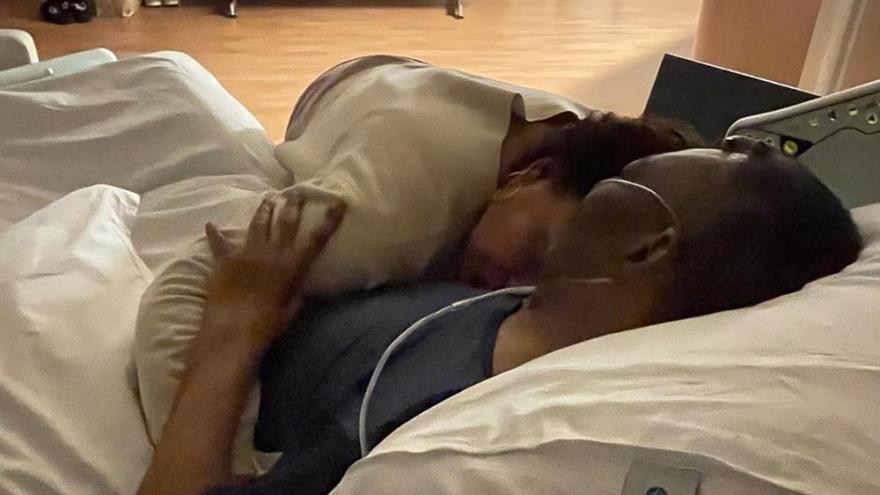 (CNN) -- The son and daughter of Brazilian football legend Pelé have taken to Instagram to post moving tributes and pictures of their father as they spend Christmas at his side at the Albert Einstein Jewish Hospital in São Paulo.

"We continue to be here, in fight and in faith. One more night together," wrote Kely Nascimento on Friday.

Her words accompanied a photo showing her hugging her father as he lies on a hospital bed. Pelé's granddaughter Sophia can also be seen in the photo.

She also shared a photo taken with her brother, Brazilian footballer and coach Edinho, who arrived at the hospital on Christmas Eve. Posting on his own Instagram account, Edinho held his father's hand and wrote: "Father... my strength is yours."

Nascimento posted earlier in the week that the family would be spending Christmas in hospital at Pelé's side.

Pelé, 82, was admitted on November 29 for a respiratory infection and "re-evaluation of the chemotherapy treatment over colon cancer identified in September 2021," according to a hospital statement.

Updates from the hospital earlier this week said that Pelé's health had worsened and he would now require greater care due to the progression of his cancer.

The hospital has not issued any updates on Pelé's condition since then.

Nascimento has previously thanked well-wishers for their tributes and messages of support.

"Our Christmas at home has been suspended," Nascimento wrote in a post on Wednesday. "We decided with the doctors that, for various reasons, it would be better for us to stay (at the hospital), with all the care that this new family ... Einstein gives us!!" added Nascimento.

After Pelé was hospitalized in November, Nascimento explained that the former soccer player had had Covid-19, despite being vaccinated "with all doses," and because the chemotherapy had made him more fragile, he contracted a lung infection.

Born Edson Arantes do Nascimento and widely considered to be one of the greatest soccer players in history, Pelé played in four World Cups, winning three -- in 1958, 1962, 1970 -- as well as scoring 12 goals in 14 games.