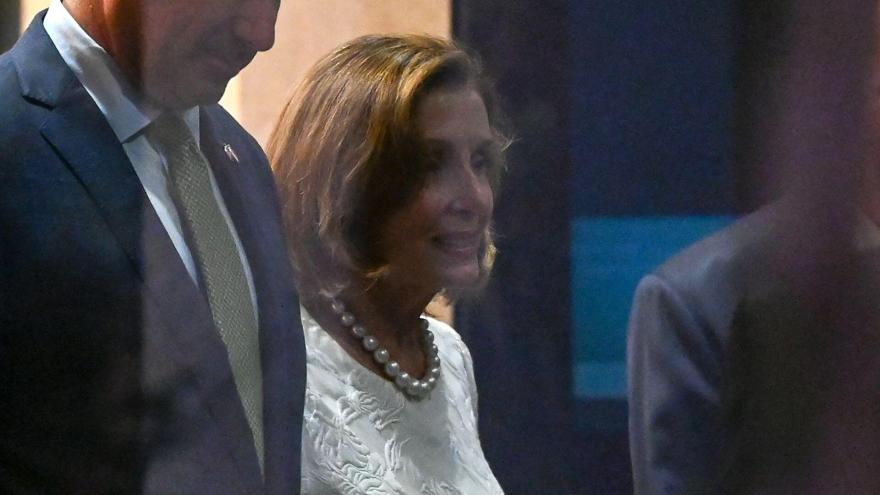 US House Speaker Nancy Pelosi will visit Taiwan's Parliament on Wednesday morning (local time) after she became the highest-ranking American official to visit the island in 25 years.

(CNN) -- During a historic trip to Taiwan Wednesday, US House Speaker Nancy Pelosi said her visit was intended to make it "unequivocally clear" that the United States would "not abandon" the democratically governed island.

As the California Democrat departed the island on Wednesday afternoon for South Korea, there were already signs of the strains her visit to Taipei -- the first by a sitting US House speaker in 25 years -- had placed on Washington's relationship with Beijing -- which warned that her trip would have a "severe impact on the political foundation of China-US relations."

China's ruling Chinese Communist Party views Taiwan as part of its territory, despite having never controlled it, and has long vowed to "reunify" the island with the Chinese mainland, by force if necessary.

Pelosi's praise of the island's commitment to democracy was a significant show of support for Taipei, coming just hours after China threatened to retaliate to her presence with a series of military exercises the Taiwanese Defense Ministry likened to a "maritime and aerial blockade."

Beijing had repeatedly warned of dire consequences should the trip go ahead -- even going as far as to warn US President Joe Biden that those who played with fire would "perish" by it.

But the warnings from Beijing -- and even a suggestion by Biden himself that the US military thought the trip was "not a good idea" -- did not dissuade Pelosi, 82, from flying into the island alongside a congressional delegation on Tuesday evening and meeting its leading officials.

"We are proud of our enduring friendship," said Pelosi, speaking alongside Taiwan's President Tsai Ing-wen at the presidential office in Taipei the morning after her arrival.

"Now more than ever, America's solidarity with Taiwan is crucial and that is the message we are bringing here today."

In a statement released Wednesday after she left Taiwan, Pelosi said that her visit "should be seen as a strong statement that America stands with Taiwan."

Pelosi arrived to a largely warm welcome in Taipei, with the city's tallest building, Taipei 101, lighting up with a welcome message and supporters gathering outside her hotel -- though her visit to the legislature on Wednesday attracted a smattering of protesters. Video showed some people shouting, "Pelosi, get out" and holding placards reading, "Taiwan doesn't want war."

President Tsai thanked Pelosi for visiting, praised her long commitment to democracy and human rights and bestowed on her Taiwan's highest civilian honor.

Beijing, within minutes of Pelosi's arrival in Taipei, said it would immediately begin "a series of joint military operations around the island," including using long-range live ammunition in the Taiwan Strait that separates the island from mainland China.

China's Ministry of Defense said the military exercises began on Wednesday, which it said involved the navy, air force and other military forces.

The Chinese incursions into Taiwan's air defense identification zone (ADIZ) were made by six J-11 fighter jets, five J-16 fighter jets, and 16 Su-30 fighter jets, the Taiwanese Defense Ministry said in a statement on Wednesday night. China frequently sends warplanes into Taiwan's self-declared ADIZ. The highest number of incursions ever recorded was on October 4 last year, when 56 military planes flew into the area on the same day.

On Wednesday, as Pelosi met with Taiwan's leaders, elbow-bumping and posing for photos, China suspended the import of citrus fruits and some fish products from Taiwan, as well as the export of sand to the island.

Chinese Customs claimed the suspension of citrus fruit imports was a result of "pest control" and "excessive pesticide residues," and cited "Covid prevention" for the suspension on seafood imports. However, its previous bans on some Taiwanese products have often coincided with periods of escalating tensions.

'Taiwan will not back down'

"Facing deliberately heightened military threats, Taiwan will not back down," Tsai said during a televised meeting with Pelosi.

"We will firmly uphold our nation's sovereignty and continue to hold the line of defense for democracy. At the same time, we wish to cooperate and work in unity with all democracies around the world to jointly safeguard democratic values."

Taiwan would do "whatever it takes" to strengthen its defensive capabilities, Tsai added, saying she was committed to "maintaining peace and stability" in the Taiwan Strait and vowing to make Taiwan a "key stabilizing force" for regional security and the development of global trade.

Pelosi told reporters Wednesday that "America stands with Taiwan" and China will "not stand in the way" of people coming to visit the island.

"We have to show the world, and that is one of the purposes of our trip, to show the world the success of the people of Taiwan," she said. "We want Taiwan to always have freedom with security and we're not backing away from that."

She also praised Taiwan as "one of the freest societies in the world."

Pelosi is a longstanding critic of the Chinese Communist Party. She has denounced Beijing's human rights record, and met pro-democracy dissidents and the Dalai Lama -- the exiled Tibetan spiritual leader who remains a thorn in the side of the Chinese government.

On Wednesday, Pelosi and the congressional delegation left the self-governed island around 6 p.m. (local), departing from Taiwan's Songshan airport