Pence: 'I think we'll have better choices in the future' than Trump 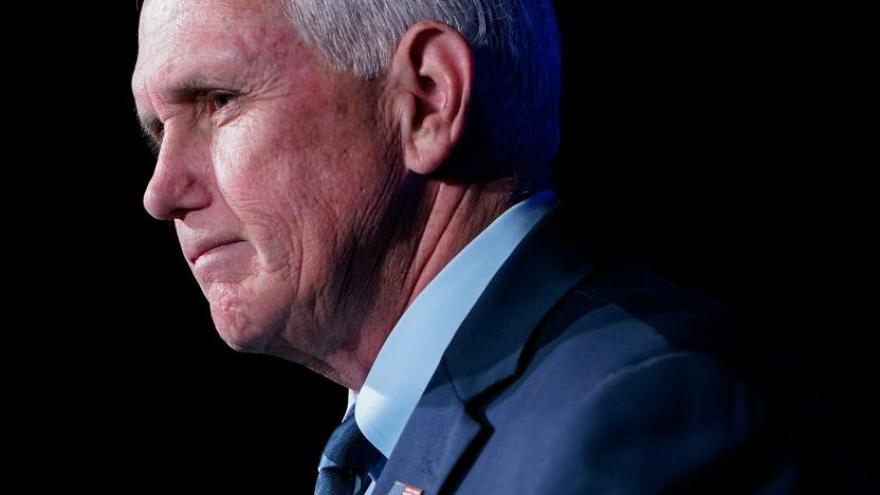 Former Vice President Mike Pence, seen here on July 26, said in a newly released interview clip that he and his family are giving "prayerful consideration" to whether he should run for president in 2024.

(CNN) -- Former Vice President Mike Pence said in a newly released interview clip that he and his family are giving "prayerful consideration" to whether he should run for president in 2024 and that the US will have "better choices in the future" than former President Donald Trump.

Asked by ABC News' David Muir if he believes he can defeat Trump, who is expected to announce a 2024 campaign for the White House on Tuesday, Pence replied: "Well, that would be for others to say, and it'd be for us to decide whether or not we'd want to test that."

And asked whether he believes his former boss should serve again as president, Pence said: "I think that's up to the American people. But I think we'll have better choices in the future. People in this country actually get along pretty well once you get out of politics. And I think they want to see their national leaders start to reflect that same, that same compassion and generosity of spirit. And I think, so in the days ahead, I think there will be better choices."

"And for me and my family, we will be reflecting about what our role is in that," he added.

The former vice president has been coy about his plans for 2024, but he has long been viewed as a potential aspirant for the Republican presidential nomination. Any formally declared bid, though, would almost certainly face strong opposition from Trump, whose supporters he would need in a primary fight.

When pressed by Muir as to why Trump didn't take action sooner to stop the violence at the US Capitol on January 6, 2021, Pence said he "can't account for what the president was doing" that day, and told ABC that he never heard from Trump or the White House on January 6.

The former vice president, who was at the Capitol on January 6 as the violence unfolded, said he "felt no fear. I was filled with indignation about what I saw."

Pence, echoing an excerpt of his book published last week in The Wall Street Journal, described how he disagreed with his Secret Service lead agent, who initially wanted the vice president to leave the Capitol building. As a compromise, Pence was taken to the loading dock, which he was told was more secure, but found the motorcade positioned to leave the Capitol.

"They were walking us for the motorcade with the doors on our Suburban open on either side. And I saw that they had positioned vehicles on the ramp. And I just turned to my Secret Service lead and said, 'I'm not getting in that car' ... I just assumed that if we got in the car and close those 200-pound doors that not my team in the loading dock, but that somebody maybe back at Secret Service headquarters would simply give the driver an order to go," Pence recalled.

"I just didn't want those rioters to see the vice president's motorcade speeding away from Capitol Hill. I didn't want to give them that satisfaction," he added.

Pence is set to participate in a CNN town hall on Wednesday, the day after the release of his forthcoming autobiography "So Help Me God." The town hall, moderated by CNN Anchor and Chief Washington Correspondent Jake Tapper, will take place in New York City and is scheduled for 9 p.m. ET.