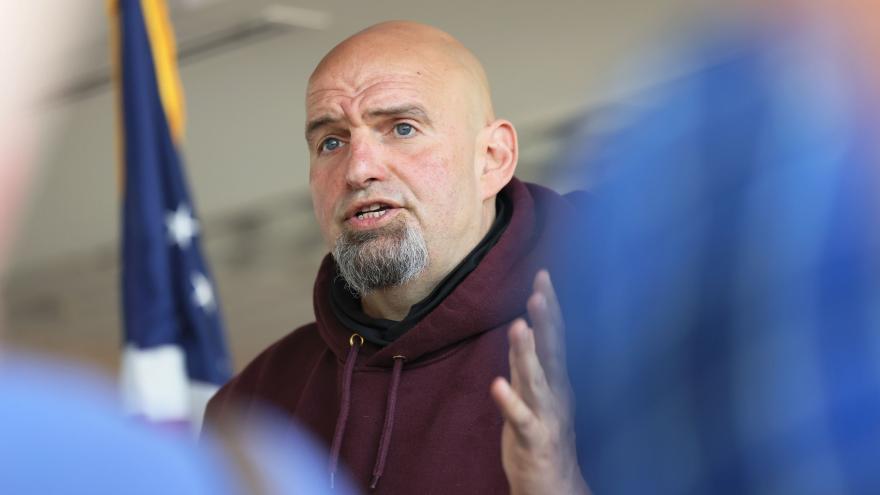 (CNN) -- John Fetterman, the favorite to win Pennsylvania's Democratic US Senate contest, announced Sunday that he's recovering after a stroke.

Fetterman is at the Penn Medicine Lancaster General Hospital in Lancaster, Pennsylvania, according to a statement, which noted he first went to the hospital Friday.

Pennsylvania's primary is on Tuesday, and polls show Fetterman, Pennsylvania lieutenant governor, holding a significant lead over US Rep. Conor Lamb and state Rep. Malcolm Kenyatta. Fetterman, who began canceling events on Friday, said Sunday he is continuing in the race.

"I had a stroke that was caused by a clot from my heart being in an A-fib rhythm for too long," he said, adding, "I'm feeling much better, and the doctors tell me I didn't suffer any cognitive damage. I'm well on my way to a full recovery."

He continued: "Our campaign isn't slowing down one bit, and we are still on track to win this primary on Tuesday, and flip this Senate seat in November."

His spokesman Joe Calvello told CNN that the lieutenant governor was on his way to an event on Friday at a college in Millersville, which is near Lancaster, when his wife, Gisele, urged him to get checked out at a hospital.

"I wasn't feeling well, so I went to the hospital to get checked out," Fetterman said in the statement. "I didn't want to go — I didn't think I had to — but Gisele insisted, and as usual, she was right."

Fetterman's campaign had not given any indication that the lieutenant governor was in the hospital and did not respond to questions about whether the illness was Covid-related.

Fetterman also canceled a handful of events on Saturday and Sunday.

Lamb, one of Fetterman's opponents, responded to the news Sunday, saying he and his wife, Hayley, "are keeping John and his family in our prayers and wishing him a full and speedy recovery."

Kenyatta also responded to the news.

"As I said at the first debate, John is an incredible family man. My prayers are with him and his family as he recovers from this stroke," Kenyatta said in a statement to CNN. "I look forward to seeing him back on the campaign trail soon!"

Fetterman, who was elected to his current role in 2018 after a failed US Senate primary bid in 2016, is an advocate for legal cannabis and lower prison sentences. He campaigned for former US presidential candidate Bernie Sanders.

Lamb has been arguing for months that Fetterman's record is too liberal for a state that voted for former President Donald Trump in 2016 before going for President Joe Biden in 2020.

Fetterman first made a name for himself as mayor of Braddock, a western Pennsylvania town hollowed out by the collapse of the steel industry.