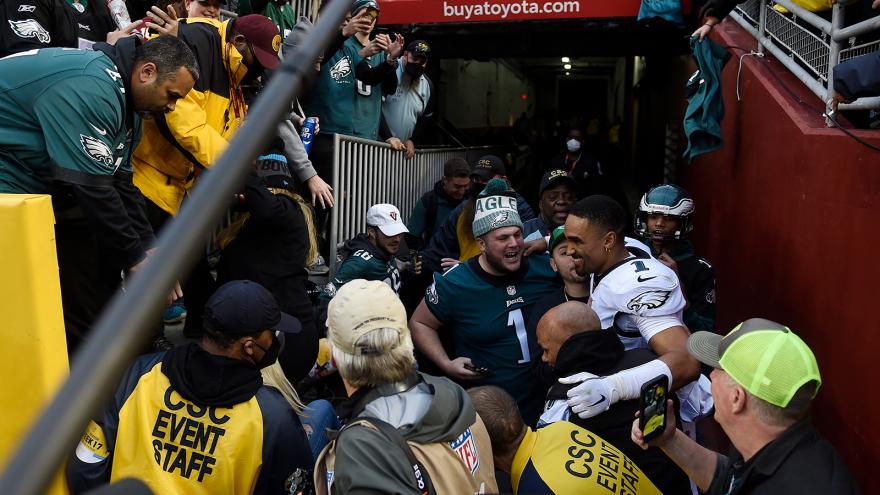 (CNN) -- Jalen Hurts had been dodging Washington Football Team defenders all day Sunday, but the final obstacle for the Philadelphia Eagles quarterback came after the game when a railing in the stands collapsed.

Following the Eagles' 20-16 win over Washington, video shows Hurts about to enter the tunnel to the locker room as excited Eagles fans cheered above at FedEx Field in Landover, Maryland. The railing then collapsed, spilling fans onto the ground and missing Hurts by mere inches.

The quarterback then helped up the fans, who were even more elated to be so close to him and take pictures.

"I'm just happy everybody's safe from it," Hurts said after the game. "It's crazy -- it's crazy stuff right there. That was a real dangerous situation. I'm just so happy everybody bounced back from it, it seemed like it."

"Passion of the Eagles fans, I love it," Hurts said.

The Washington Football Team is aware of the incident, the team said in a statement Sunday.

"To our knowledge, everyone involved was offered onsite medical evaluation and left the stadium of their own accord," the statement read. "We're very glad no one appears to have been seriously injured. The safety of our fans and guests is of the utmost importance and we are looking into what occurred."

The NFL will review the incident with the club and stadium operations, a league spokesperson told CNN. The Eagles provided no comment.