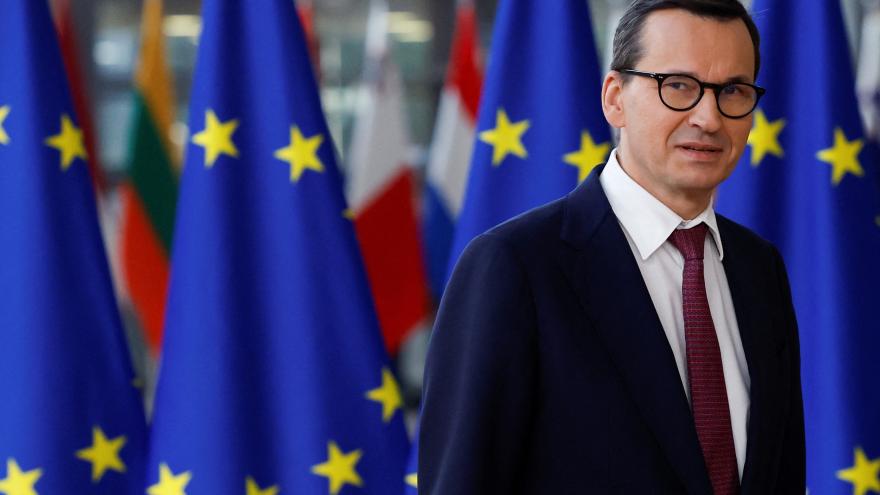 (CNN) -- Two Polish citizens were killed by a Russian-made missile on Tuesday, raising fears that Russia's war in Ukraine could spill over into NATO territory.

It remains unclear where the missile was fired from, and why it fell in Poland.

The missile landed outside the rural Polish village of Przewodow, roughly the same time as Russia launched its biggest wave of missile attacks on Ukrainian cities in more than a month.

At the site of the explosion, about four miles west from the Ukrainian border, local media showed an image of a crater and upturned farm vehicle. CNN cannot independently confirm the photos. Video taken by a resident, which was geolocated and confirmed by CNN, shows a large smoke plume in the center of the village.

A local resident told CNN they heard a terrifying "whoosh" as the projectile flew over the town, and a caretaker of a local school added that the force of the explosion shook classroom windows.

Poland is a member of the North Atlantic Treaty Organization (NATO). Polish officials said Warsaw is considering invoking NATO Article 4 in order to discuss its concerns with the security alliance's decision-making body, and will also increase the combat readiness of some Polish troops.

"We decided to increase the combat readiness of selected units of the Polish armed forces, with particular emphasis on airspace monitoring," Polish Prime Minister Mateusz Morawiecki said in a Tuesday address, explaining that "airspace monitoring is and will be carried out in an enhanced manner together with our allies."

Morawiecki stressed that evidence suggests the missile that landed was a "single act" and there is no evidence of further missiles.

Poland's Ministry of Foreign Affairs has summoned the Russian ambassador in the wake of the incident.

Russia's Defense Ministry earlier on Tuesday denied targeting the border, and called the reports by Polish media, who first reported the deaths, "a deliberate provocation in order to escalate the situation," according to a short statement late Tuesday.

"The statements of the Polish media and officials about the alleged fall of 'Russian' missiles in the area of the settlement of Przewodow is a deliberate provocation in order to escalate the situation," it said, adding that "there were no strikes made on targets near the Ukrainian-Polish state border."

It added that the photos of wreckage published by the Polish media "from the scene in the village of Przewodow have nothing to do with Russian weapons."

Kremlin spokesperson Dmitry Peskov told CNN he had no information on an explosion in Poland.

'Important that all facts are established'

Polish President Andrzej Duda emphasized in a Tuesday address that Poland does not know who fired the missile, while noting that the missile was "most likely produced in Russia."

"We are working calmly and in a very calm manner," Duda said during an address from the Bureau of National Security in Warsaw, as he urged calm and reassured the country of NATO allies' support.

The United States is sending experts to investigate the site, and ongoing investigations will be a joint operation, Duda said.

NATO Secretary General Jens Stoltenberg said Tuesday that it was "important that all facts are established," after speaking with Polish President Andrzej Duda about the explosion.

"I offered my condolences for the loss of life. NATO is monitoring the situation and Allies are closely consulting. Important that all facts are established," Stoltenberg said in a post on Twitter.

NATO allies responded with concern to the incident. Some were circumspect in their statements, neither speculating or confirming what caused the explosion.

US President Joe Biden spoke with Duda and "reaffirmed the United States' ironclad commitment to NATO," according to a readout of the call.

French President Emmanuel Macron called for talks at the G20 summit on Wednesday, which Biden is attending, following reports of the incident in Poland, according to an Elysee Palace spokesman on Tuesday.

A French defense source told CNN that France was being "extremely cautious" and that officials would not comment until they were able to "analyze all the available information."

British Prime Minister Rishi Sunak on Tuesday spoke with Duda reiterating the UK's "solidarity with Poland and expressed condolences for the victims."

But Baltic NATO states were more strident in their statements, stressing readiness to defend NATO territory.

Estonia called the news "most concerning," according to a Twitter post from the Estonian Ministry of Foreign Affairs. "Estonia is ready to defend every inch of NATO territory," it added.

Latvian Defense Minister Artis Pabriks afforded blame on Russia, describing the incident as a "crime," even though there had been no confirmation from Polish authorities at the time that one Russian missile landed in their territory.

Ukrainian President Volodymyr Zelensky, whose country is not a NATO member, also pointed the finger at Moscow. "Hitting NATO territory with missiles is a Russian strike against collective security. This is a very significant escalation, we have to act," he said.

The North Atlantic Treaty Organization is a group of 30 North American and European nations. According to NATO, its purpose "is to guarantee the freedom and security of its members through political and military means."

The alliance was created in 1949 in response to the start of the Cold War. Its original purpose was to protect the West from the threat posed by the Soviet Union. Since the end of the Cold War, many former Soviet nations have joined NATO, much to the annoyance of Putin.

Article 4, which Poland is considering, is a consultation method that allows members to bring an issue, usually a security issue, affecting them for discussion at the North Atlantic Council, the alliance's decision making body.

"The Parties will consult together whenever, in the opinion of any of them, the territorial integrity, political independence or security of any of the Parties is threatened," the article states.

The best-known aspect of the alliance is Article 5 of the treaty, which, if invoked, means "an attack against one Ally is considered as an attack against all Allies." It has only ever been invoked once, in response to the September 11, 2001 terrorist attacks on the United States.

However, the alliance can take collective defense measures without invoking Article 5 -- and has done this in the light of the Russian attack on Ukraine.

Russian President Vladimir Putin has long complained that NATO has, over time, expanded its borders by admitting Eastern European countries that were once part of the Soviet Union -- meaning Russia now shares a land border with the world's largest military alliance, thus reducing his geopolitical power in what was once Moscow's sphere of influence.

As recently as February, he was demanding that NATO scaled back to the borders of 1997, before the Baltic nations of Latvia, Lithuania and Estonia, the latter two of which border Russia, joined the alliance.