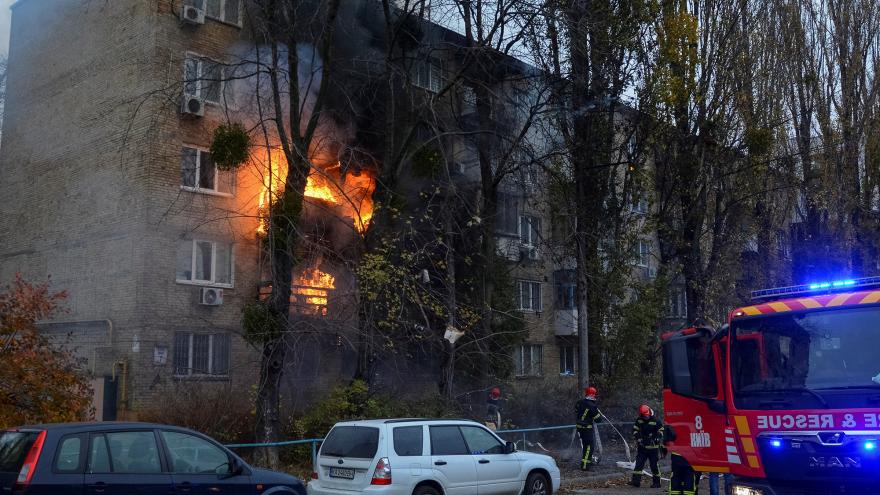 (CNN) -- Polish President Andrzej Duda said the missile that killed two people in eastern Poland on Tuesday was likely fired by Ukrainian forces defending against a wave of Russian missile strikes, and that the incident appeared to be an accident.

"There is no indication that this was an intentional attack on Poland. Most likely, it was a Russian-made S-300 rocket," Duda said in a tweet Wednesday. He later told a press conference that there was a "high chance" it was an air defense missile from the Ukrainian side and likely had fallen on Polish territory in "an accident" while intercepting incoming Russian missiles.

Duda's comments were in line with those of two officials briefed on initial US assessments, who told CNN it appears the missile that originated in Ukraine, even though it was Russian-made.

CNN has not confirmed the type of missile that landed in Poland. Both Russian and Ukrainian forces have used Russian-made munitions during the nine-month conflict, including the S-300 surface to air missile system, which Kyiv has deployed as part of its air defenses. These older-generation weapons systems date back to the period when both Russia and Ukraine were part of the Soviet Union.

The missile landed outside the rural Polish village of Przewodow, about four miles (6.4 kilometers) west from the Ukrainian border on Tuesday afternoon, roughly the same time as Russia launched its biggest wave of missile attacks on Ukrainian cities in more than a month.

The US officials said Wednesday that US assessment is what President Joe Biden appeared to be alluding to in earlier remarks when he said it was "unlikely" the missile originated in Russia. The intelligence assessments were discussed at an emergency meeting called by Biden on the margins of the G20 summit in Bali.

NATO Secretary General Jens Stoltenberg also said there was no indication the incident was the result of a deliberate attack.

"But let me be clear, this is not Ukraine's fault," he said. "Russia bears ultimate responsibility, as it continues its illegal war against Ukraine."

Stoltenberg added that "we have no indication that Russia is preparing offensive military actions against NATO."

A joint statement following the emergency meeting at the G20 was deliberately ambiguous when it came to the incident, putting far more focus on the dozens of strikes that happened in the hours before the missile crossed into Poland.

The Associated Press reported Wednesday that three US officials said preliminary assessments suggested the missile was fired by Ukrainian forces in an attempt to intercept an incoming Russian strike. The officials spoke on condition of anonymity because they were not authorized to discuss the matter publicly, according to the AP.

A spokesperson with the US National Security Council declined to comment on the AP report. "We have no comment and will not be confirming this report. As the President said today, we support Poland's ongoing investigation to figure out exactly what happened," the spokesperson said.

Earlier, Biden said preliminary information suggests it is unlikely the missile that landed in Poland was fired from Russia after consulting with allies at the G20 Summit in Bali.

Kremlin Spokesman Dmitry Peskov said Wednesday that Russia doesn't have "any relation" with the missile incident in Poland, and that some leaders have made statements without understanding "what actually happened."

"The Poles had every opportunity to immediately report that they were talking about the wreckage of the S-300 air defense system missile. And, accordingly, all experts would have understood that this could not be a missile that had any relation with the Russian Armed Forces," Peskov said during a regular call with journalists.

"We have witnessed another hysterical frenzied Russophobic reaction, which was not based on any real evidence.

"High-ranking leaders of different countries made statements without any idea about what actually happened."

These older-generation weapons systems date back to the period when both Russia and Ukraine were part of the Soviet Union.

In a statement to CNN on Wednesday, an adviser to Ukrainian President Volodymyr Zelensky did not explicitly deny reports the missile originated in Ukraine but emphasized Russia's responsibility for starting the war.

"There is only one logic to be followed," Mykhailo Podolyak, an adviser to the head of the Office of the Ukrainian President, said. "The war was started and is being waged by Russia. Russia is massively attacking Ukraine with cruise missiles. Russia has turned the eastern part of the European continent into an unpredictable battlefield. Intent, means of execution, risks, escalation -- it is all coming from Russia alone."

"And there can be no other explanation for any missile incident here. So when an aggressor country launches a deliberate, massive missile strike against a large country on the European continent with its obsolete Soviet-era weapons (Kh-class missiles), tragedy sooner or later occurs on the territories of other states as well."

A spokesperson for the Ukrainian Air Force said on national television Wednesday that it will "do everything" to facilitate a Polish investigation into the strike.

"What happened was the Air Defense Force repelling the air attack," Yurii Ihnat, spokesperson for Air Force Command Ukraine, said. "What happened next -- whether it was a Russian missile, or this was the wreckage of both rockets falling -- this has to be inspected at the site. And that is what is happening right now."

He added that "what happened yesterday is obviously the consequences of the war."

Ukrainians across the country were expected to face further scheduled and unscheduled power cuts Wednesday.

"Massive missile strikes on November 15 on the energy infrastructure and cold weather further complicated the situation with the power system," the state energy company NPC Ukrenergo said in a statement.

"Please prepare for longer power cuts: stock up on water, charge your devices and power banks in advance to stay in touch with your loved ones."