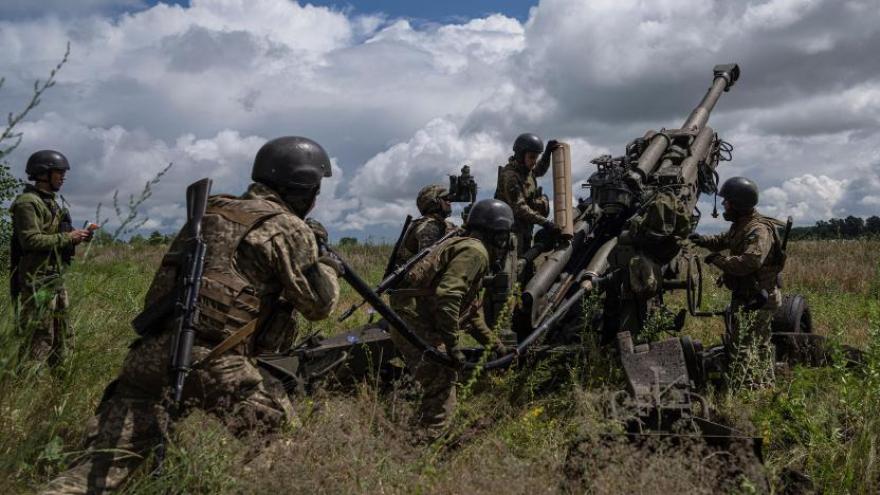 Ukrainian servicemen prepare to fire at Russian positions from a U.S.-supplied M777 howitzer in Kharkiv region, Ukraine, on July 14.

(CNN) -- Americans still strongly back the US providing aid for Ukraine's fight against Russia, but there has been a decline in support amongst Republicans as some prominent GOP politicians and media figures express opposition to the US providing additional support to Kyiv, a new poll has found.

The poll from the Chicago Council on Global Affairs found that most Americans still support aiding Ukraine -- 65% support sending weapons, 66% support economic aid, 75% support increasing sanctions on Russia, and 73% support accepting Ukrainian refugees to the US.

The Biden administration has sent roughly $20 billion in assistance to Ukraine, as of last month, and 40% of respondents to the new poll say the US should "maintain its current level of support for Ukraine indefinitely," rather than intervening militarily in support of Ukraine or gradually withdrawing US support.

However, the share of Americans who believe the US should support Ukraine for "as long as it takes" dropped 10 percentage points since the summer, the poll also found.

In the latest poll, 33% of Republicans agreed with that prolonged support, compared to 61% of Democrats and 46% of independents.

Another poll offered some insight into how Americans' responses to foreign policy questions can vary depending on the framing they are presented with. The national survey from Marquette Law School found that while 45% of US adults supported Congress sharply reducing aid to Ukraine, just 32% said in a separate question that the US was providing too much support to Ukraine.

The survey report says the difference in the results of those two questions is due to the framing; when respondents are asked a question explicitly mentioning Russia's invasion of Ukraine, "there is less of a view ... that the US is providing too much support, than with the previous 'sharply reduce' framing that did not mention the Russia invasion."

Nevertheless, the results among Republicans from the Chicago Council on Global Affairs' poll suggest remarks from some conservative lawmakers and pundits in recent months may be having an impact.

A minority of GOP House members have argued the incoming Republican majority should support reducing aid to Ukraine including Reps. Marjorie Taylor Greene of Georgia and Chip Roy of Texas. Rep. Jim Banks of Indiana said in October that the US "can't put America first by giving blank checks to those around the world to solve their problems."

Fifty-seven Republicans in the House and 11 in the Senate voted against the $40 billion Ukraine aid bill in May.

One GOP lawmaker previously told CNN that Republicans against aid to Ukraine are experiencing the "'Tucker Carlson' effect."

"I love Tucker on other issues, but he's wrong on this," the lawmaker said. "He's listening to Russia disinformation. And he's creating problems for us in our districts."

But that's not to say that is the view of all Republican lawmakers. House Minority Leader Kevin McCarthy appeared to say in October that Republicans supported slowing down financial support for Ukraine, but later clarified that he still supported sending financial aid while encouraging greater oversight.

Sen. Marco Rubio of Florida told CNN in September that the US should "send them anything they need to reclaim their territory, to the extent that we have it available, and it is reasonable."

Ultimately, the new Chicago Council poll finds that -- like many things -- opinion on US support abroad differs along party lines. But "support for the current US policies of assisting Kyiv economically and militarily is still solid," the poll concludes.