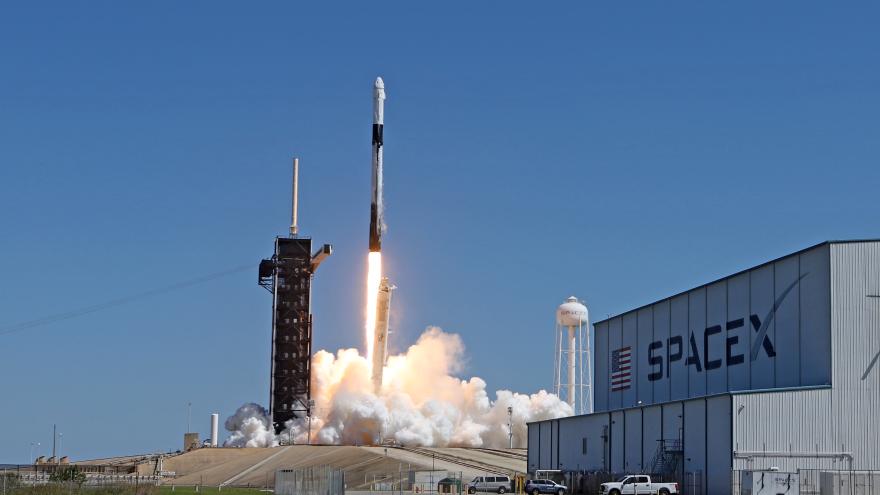 (CNN) -- Private astronaut missions to the International Space Station will have to be chaperoned by a former NASA astronaut, per new proposed requirements from the US space agency.

NASA posted a public notice online on Tuesday that laid out a handful of updated requirements for future private astronaut missions, which the agency said are based on lessons learned upon completion of the first private astronaut mission to the ISS that took place last April. The first all-private mission to the orbiting laboratory was a multi-million dollar journey organized by Texas-based startup Axiom Space and launched via a SpaceX rocket, with a crew comprised of a former NASA astronaut and current Axiom Space employee, Michael López-Alegría, and three ultra-wealthy paying crewmembers.

During the mission, dubbed AX-1, the four-member crew spent nearly two weeks off of Earth's surface, at least in part conducting experiments and other scientific work. Other space tourism companies like Blue Origin or Virgin Galactic only offer customers short trips that allow for a few minutes of microgravity.

Among the most notable new policies for these pricey, private missions to the ISS is that "upcoming private astronaut missions include a former flown NASA (U.S.) government astronaut as the mission commander," according to the NASA update.

Late last year, SpaceX launched the Inspiration4 mission, which was bankrolled by billionaire Jared Isaacman and had a four-person crew composed entirely of people without any prior spaceflight experience.This private mission, however, simply took a three-day spin around Earth in a SpaceX dragon capsule and did not dock at the ISS.

Axiom has already stated that its second private astronaut mission to the ISS, dubbed AX-2 and expected to launch next year, will have former NASA astronaut Peggy Whitson as a mission commander.

During remarks at the annual International Space Station Research and Development Conference last week, López-Alegría spoke about how he became mission commander for the AX-1 flight, saying he initially didn't expect to return to space after retiring from NASA.

When Axiom was looking for customers, however, "It became pretty clear, first of all, that customers really didn't want to fly with nobody who'd done it before," he said. It also became apparent, he said, "NASA was a lot more comfortable having someone who'd been there before."

"We were having a meeting and we looked around the room and I was the only guy who'd been to space, so I raised my hand. I volunteered," López-Alegría quipped at the conference.

NASA is also adding additional requirements that appear to be a result of new information learned from the AX-1 mission. Future private missions to the space station will include more time for "microgravity adaptation," as the floating environment of the ISS can often induce space sickness, which is akin to motion sickness.

The federal space agency will also be introducing clarifications to the ISS code of conduct for commercial visitors, requirements for more detailed plans regarding crew interactions with the media, as well as a requirement for additional time to evaluate research proposals before they are brought on board.

Larry Connor, an AX-1 crewmember, told CNN in April that he and his crewmates were pressed for research time on the ISS.

"If it were not for the NASA's Crew-3 astronauts, and their phenomenal help, we would never - underscore the word never - have been able to accomplish all of our objectives," Connor said at the time. "We underestimated the time on some of the projects. We had one project early on that we thought was two-and-a-half hours take five hours."

A NASA rep did not immediately respond to CNN Business' request for further comment on the new requirements. They come, however, as the private spaceflight industry has officially lifted off after decades of people largely having to rely on government agencies and the extraordinarily selectiveastronauthiring process if they wanted to go to space. Now, those who seek to leave Earth's surface simply must have the means to pay for it.

While Axiom did not publicly disclose how much its first cohort of private astronauts shelled out for the AX-1 mission, the Washington Post reported that each crew member dished out $55 million for the flight.