Pro wrestlers used to love to be hated. But today's political tensions make that dangerous 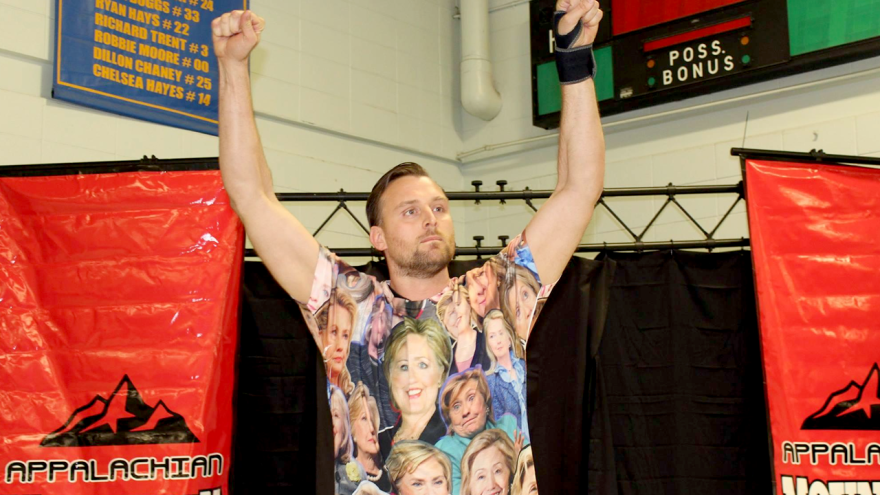 (CNN) -- Back in the late 1980s, when Beau James started pro wrestling, the crowds came for a show between good and evil, to see a story about heroes and villains, to enjoy the bouts and then go home.

James enjoyed being the hero but it was nothing compared to playing the bad guy.

"They introduced me and the people booed me for almost two straight minutes. ... It's a high. ... And I've been there in the same situation where they love me -- I don't think it compares to the high of the hatred."

Wrestlers build a persona with a backstory so the audience feels the stakes are high when they get punched in the face. While they often take themes from news and pop culture, they're not usually overtly political. But the 2016 presidential race between Donald Trump and Hillary Clinton sparked an idea between James and wrestler Dan Harnsberger.

Together they developed "The Progressive Liberal" Dan Richards, often the bad guy at the matches in the Republican-voting mining towns of Appalachia and some southern states. The Liberal would get a hearing and even some cheers as crowds watch the staged violence at a night of pro wrestling.

Over the past five years, however, that atmosphere has turned far darker, James and Harnsberger said this month.

After this month's midterm elections brought defeat for many Trump-backed candidates, even some election deniers conceded their races. It suggested at least some were ready to move past Trump's refusal to accept his 2020 loss and the mob of supporters he incited who violently stormed the US Capitol on January 6, 2021.

But in the mountain towns of Appalachia, that rhetoric has had a lasting effect, Harnsberger said, even among fans who know wrestling is entertainment.

"The crowd has taken on a more violent approach towards me," said Harnsberger, who plays the Progressive Liberal in the ring. "I had rocks thrown at me. A lady pulled out a lighter, tried to light my trunks on fire while they are on me. And had someone else pull out a switchblade."

A pro wrestler lives or dies by the involvement of the crowd, which is more important even than the skills of those inside the ring.

So when he saw forests of Trump flags across West Virginia during the 2016 presidential election, James wondered how he could tap in to that passion -- known as "heat" in wrestling parlance.

"My God," he remembers saying to a buddy. "If we had a guy that was the anti-Trump, and we could send him to the ring in these towns, how much heat would we get?"

They tried wearing a Hillary Clinton flag in the ring, and got a very strong reaction. The next weekend, James ran into Harnsberger for the first time in a while. They'd wrestled together years earlier. Separately, Harnsberger had been testing how his politics would play.

The two came together to create and promote the Progressive Liberal. James helped Harnsberger sharpen his opinions into lines that would rile up the crowd, and how to pace them -- like when to say, "We're coming for your guns."

And things went well. They entertained. One time a fan flashed a 9mm handgun on his hip and told Harnsberger to come take it, James said. Occasionally Harnsberger would have half the crowd on his side, like at a match in the Arkansas Ozarks.

When a sports website noticed Harnsberger's gimmick in 2017, a wave of reporters, including me, came to see how his Hillary trunks were playing in the counties that showed the most support for Trump.

"The heat you want is the heat where people are upset at what you stand for ... and they want to see you get your ass kicked," Harnsberger said.

That's when crowds get invested and will watch you win or lose and come back the next time.

In 2022, the Hillary trunks have been replaced by a pair saying, "Riding with Biden."

The Progressive Liberal is still the bad guy, but Harnsberger and James said the audiences have changed.

"The last five years, it's just got out of hand," James said. People have become more frustrated, more divided, he said. And the Progressive Liberal offers an outlet for that built-up energy.

"So, now here's this guy in our town, saying this stuff that we see on television that we don't agree with. We can't get those people [on TV], we can't get the politicians. Let's get him," James said, describing the attitude.

"Dan gets to go and unleash what he believes, what he feels, his frustrations to an audience that he's upset [and] that they get to give it right back to him because he's the closest thing to what they're mad at, that they can actually interact with," he said.

And while most politicians aren't coming to these little towns, the Progressive Liberal does. "You can cuss him. You can boo him, you can slap him, or try. You can throw something at him. He's right there," James said.

Harnsberger is a liberal and James a conservative. They don't agree much on politics and don't talk about it outside the ring, except to work on their act.

"We're complete opposites," James said. "I'm a gun-owning, tobacco-chewing, Bible-believing mountain person; Dan is not. But Dan and I can get along. And if we have arguments, we have a luxury that most people don't have -- we know somewhere in the next few days, we'll be in the ring together so we can just punch the other one in the back of the head."

But that's stagecraft. And that's not what's been happening with the audience.

James lays down some rules to try to keep the crowd from turning ugly -- there's no criticism or banter about the Bible or the opioid crisis in these towns.

But on a recent night in Stickleyville, Virginia, where Trump's share of the vote rose from an already overwhelming 78% in 2016 to 84% in 2020, it did turn ugly, and fast.

As Harnsberger tried to engage with the people who'd paid to watch, he was drowned out by boos.

A lot of that was expected. A man in the audience, Alex Adkins, told CNN the Progressive Liberal's opinions would not go down well: "Everybody wants to punch him in the face!"

And a man with a Trump flag who didn't want to give his name said he wanted to see Harnsberger beaten up. "We love wrestling, first of all," he said as to why he was there. "But to come and show the liberal like, hey, we know what we stand for. Yeah, and definitely not the left side."

When some in the audience told their neighbors to let Harnsberger speak, it boiled over. Punches were thrown. Someone was hit with a chair.

"It got beyond the point of heat to it's dangerous," James said, explaining why they cut the bout short.

More fights broke out and the brawling spilled into the parking lot.

As James and Harnsberger sat backstage, waiting for it to be quiet enough to allow them to leave safely, they both agreed they could have handled the situation better.

But neither said they created the problem.

"I think if I had never existed they would feel the same thing," Harnsberger said. "But I have a unique ability to bring that reaction out of them when I'm in front of them since I am here."