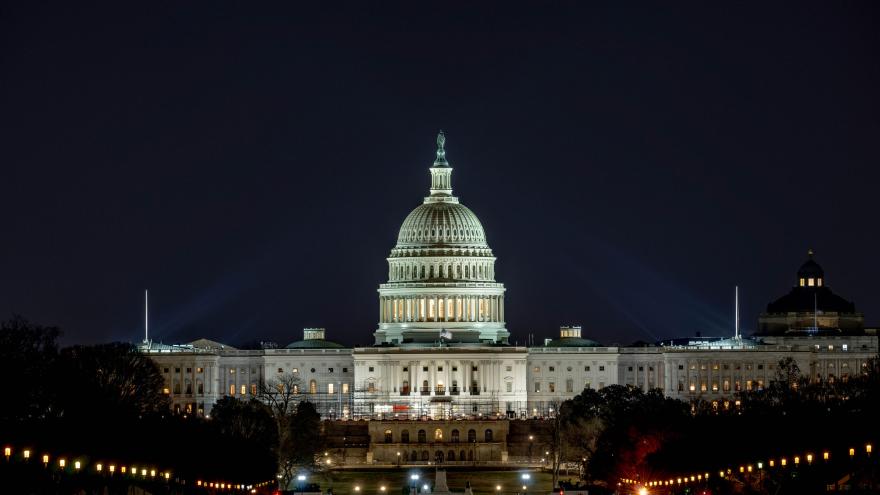 (CNN) -- Members of a production team for "The Late Show with Stephen Colbert" were arrested earlier this week by police as they filmed a comedy segment at the US Capitol, in an incident that was used by prominent right-wing voices to assail the probe into the January 6 insurrection.

US Capitol Police said in a Friday statement that at approximately 8:30 p.m. Thursday, officers "observed seven individuals, unescorted and without Congressional ID, in a sixth-floor hallway" in the Longworth House Office Building on Capitol Hill in Washington.

"The building was closed to visitors, and these individuals were determined to be a part of a group that had been directed by the USCP to leave the building earlier in the day," the statement said.

Capitol Police said the individuals were charged with unlawful entry, adding that the matter is considered "an active criminal investigation" and that it "may result in additional criminal charges after consultation with the U.S. Attorney."

CBS said in a statement that its crew was onsite at the Capitol on Wednesday and Thursday as it filmed a segment featuring "Triumph the Insult Comic Dog," a puppet voiced by the comedian Robert Smigel. CBS said that its production team's interviews with members of Congress had been "authorized and pre-arranged."

The network said that after the interviews had concluded on Thursday, the production team "stayed to film stand-ups and other final comedy elements in the halls when they were detained by Capitol Police."

The incident, which comes as the House committee investigating the January 6, 2021, attack on the US Capitol holds public hearings, was used by prominent right-wing media stars to attack the bipartisan probe.

On Fox News, the channel's prime-time hosts used the development to link Democrats to the security violation.

Most of the attacks focused on Rep. Adam Schiff, who in recent years has been portrayed as a top villain in right-wing media. The California Democrat, a member of the January 6 committee and chair of the House Intelligence panel, participated in an interview with the Colbert crew Thursday morning at around 10 a.m., an aide to his office told CNN. Schiff's interview with the Colbert team was many hours before the crew was detained.

While Fox News reporter Chad Pergram tweeted that it was someone other than a member of Schiff's office who let the crew into the Longworth Building later in the day, the network repeatedly attacked the congressman, with hosts telling their millions of viewers he had played a crucial role in the matter.

Later in the evening, Tucker Carlson, who has repeatedly mocked the assertion that an insurrection took place on January 6 and promoted conspiracy theories about the events of that day, asserted that the crew had "committed insurrection."

"It's exactly like what happened on January 6, so we'll take a close look at what the punishments are," Carlson said.

"We have to get to the bottom of it," host Rachel Campos-Duffy said on "Fox & Friends Weekend."

It is not clear when the filmed segment might air on "The Late Show."

A spokesperson for CBS declined to answer further questions on the incident. Colbert has also not yet commented on the matter.