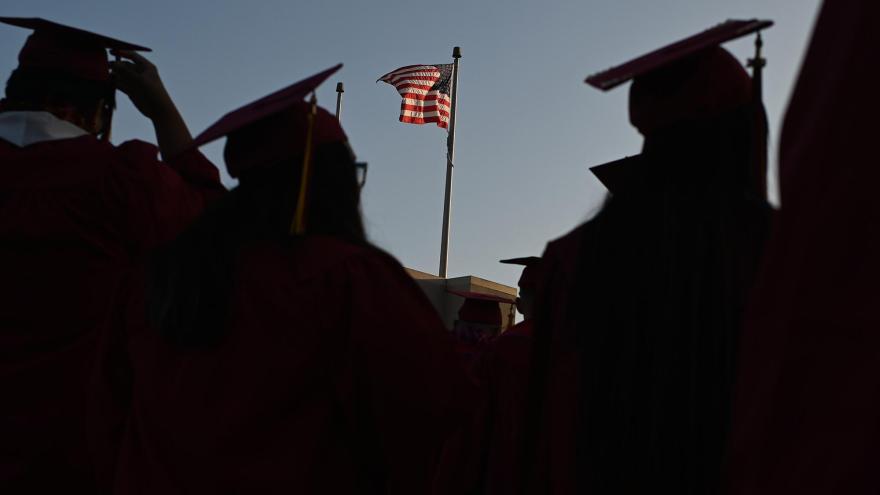 Last year, the Biden administration temporarily expanded eligibility for the Public Service Loan Forgiveness program -- but borrowers must apply for a waiver by October 31 in order to take advantage of the benefit.

(CNN) -- Last year, the Biden administration temporarily expanded eligibility for the Public Service Loan Forgiveness program -- but borrowers must apply for a waiver by October 31 in order to take advantage of the benefit.

The PSLF waiver is separate from the one-time student loan forgiveness plan President Joe Biden announced in August, which will cancel up to $20,000 in student loans for low- and middle-income borrowers.

Public Service Loan Forgiveness could be even more generous for borrowers who qualify. The program cancels any remaining federal student loan debt for eligible government and nonprofit workers after they have made 120 qualifying monthly payments, which takes at least 10 years. The amount of student debt relief is not capped.

But the PSLF program has been riddled with problems. Before Biden announced the temporary changes to the program, many borrowers reached 10 years of repayment believing they qualified for cancellation of their remaining debt, but instead found out that they had the wrong kind of loan or were making payments in the wrong kind of repayment plan. In 2019, the US Government Accountability Office found that about 99% of PSLF applications had been rejected.

The temporary waiver attempts to resolve those issues so that some borrowers can retroactively qualify for student loan forgiveness under PSLF.

The Public Service Loan Forgiveness program, which was created by Congress in 2007, isn't going away -- but the temporary waiver will expire October 31.

At the end of July, 172,151 borrowers had seen their PSLF waiver discharges processed, according to the most recent data from the Department of Education. The agency had estimated that 550,000 borrowers would be eligible under the temporary expansion of the program.

Here's what borrowers need to know.

Who benefits from the PSLF waiver?

Borrowers must be employed full time by a qualifying nonprofit or the government while making payments to benefit from the program. For example, many teachers, social workers and first responders, as well as some doctors and lawyers, may qualify.

Normally, eligibility also hinges on having a federal Direct Loan and being enrolled in an income-driven repayment plan, which sets payments based on income and family size. Those with Federal Family Education Loans, which were made by private lenders but backed by the government, do not normally qualify.

But for those borrowers granted a waiver, it does not matter what kind of federal student loan a borrower has or what payment plan he or she is enrolled in. All payments will be eligible for the Public Service Loan Forgiveness program for qualifying borrowers.

Once a borrower applies for the waiver, the Department of Education will review past payments to count those made on previously ineligible loans. It will also count months that service members spent on active duty toward PSLF, even if loan repayment was on a temporary suspension through a deferment or forbearance.

The department's review will also take a look at payments that were potentially miscounted by the company or organization servicing the loan. In some instances, borrowers missed out because their payments were off by as little as a penny or late by a few days. Sometimes a payment was posted but the online record of payment showed that no bill was generated. Under the waiver, the Department of Education adjusts the count for borrowers affected by these issues as well.

Some borrowers won't have to do anything and the department will automatically review their payments. This applies to those who already consolidated their loans into a Direct Loan and have had at least some qualifying employment certified.

Borrowers who currently have a non-qualifying loan, such as the Federal Family Education Loan, must first consolidate their debt into a Direct Loan by October 31. Borrowers can consolidate their loan online at the Department of Education's student aid website. The process should take less than 30 minutes.

Once a borrower has consolidated into a Direct loan, he or she must submit a PSLF form. The Department of Education instructs borrowers to use the PSLF Help Tool by October 31 to generate a complete PSLF form to submit to the loan servicer MOHELA, which is now handling all borrowers pursuing PSLF. (Some borrowers are still being transferred from FedLoan, which ended its servicing contract with the government. The transfer process is expected to be complete by the end of September.)

What happens after October 31?

Beginning November 1, the normal Public Service Loan Forgiveness program requirements will be back in place.

For example, if you consolidate a Federal Family Education Loan into a Direct Loan after October 31, payments made before the consolidation will not count toward forgiveness.

But borrowers who applied but did not yet receive the debt relief by October 31 don't need to panic. The Department of Education will continue processing forms generated by the PSLF tool before November 1, according to the agency website.

The department expects processing to take at least 90 business days.

Meanwhile, federal student loan payments have been paused since March 2020 thanks to a pandemic-related benefit. Payments will resume after the pause expires on December 31.

Can a borrower receive a refund?

Yes, it's possible. Borrowers who made more than 120 qualifying payments may receive a refund for the extra payments if they were made after they consolidated their loan.

For example, a borrower who made 60 payments on a Federal Family Education Loan and then consolidated and made 70 payments on a Direct Loan could be refunded for those 10 extra payments, in addition to immediately seeing his or her outstanding debt canceled if the waiver is granted.