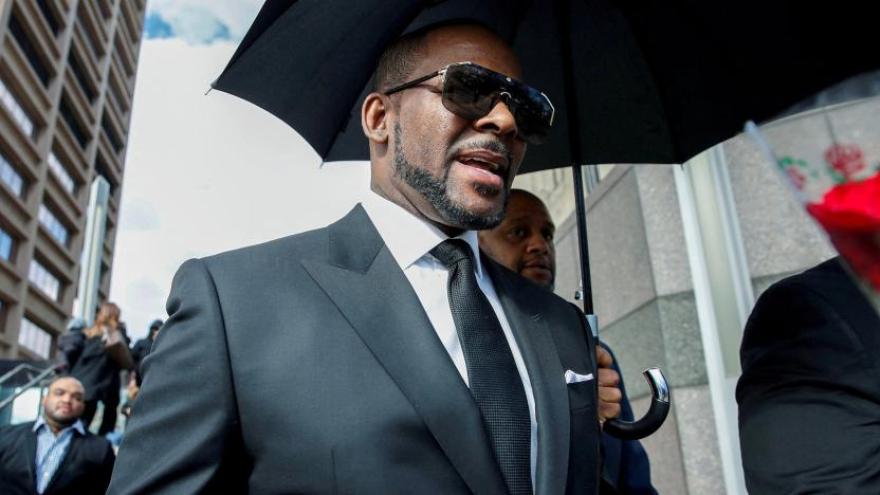 Grammy-winning R&B star R. Kelly leaves the Cook County courthouse in March 2019 in Chicago. R. Kelly's federal trial in Chicago will revisit accusations made against the singer in 2008 that ended with his acquittal.

(CNN) -- A jury has been selected and sworn in for the Chicago federal child pornography and obstruction trial for R. Kelly and two of his former associates, Derrel McDavid and Milton Brown.

The jury is made up of four men and eight women. There are six alternate jurors, five women and one man.

A pool of more than 100 jurors was questioned by US District Judge Harry Leinenweber beginning Monday morning.

Jennifer Bonjean, an attorney for Kelly, took issue with prosecutors' decisions to challenge potential jurors, claiming prosecutors often struck jurors who were Black and called it a pattern that was "quite disturbing." Assistant US Attorney Jeannice Appenteng said this was not the case and pointed to the fact that prosecutors did not put forth challenges for multiple Black jurors.

"It's just another example of an effort to violate not only the jurors' First Amendment rights, but also Mr. Kelly's right to a jury of his own peers," Bonjean said in court.

Fourteen years after R. Kelly was acquitted of child pornography charges in Illinois, he is back in his hometown facing more federal charges that involve some of the tapes and victims from his previous state trial.

Kelly, who was convicted of racketeering and sex trafficking charges at a Brooklyn federal trial in September and sentenced to 30 years in prison, will now face charges at the Chicago federal trial that he sexually abused five minors in the late 1990s and created multiple explicit videos with four of them.

Prosecutors are expected to show multiple tapes of child pornography allegedly involving Kelly having sex with underage girls. The public and media will not be permitted to view the tapes, as they are considered contraband, but jurors will.

Kelly worked closely with McDavid and Brown at the height of his career in the 1990s.

McDavid worked for Kelly as a business manager from 1991 until about 2014, according to an indictment, which claims that part of his job was to "protect Kelly's image, reputation and assets" against active and potential criminal investigations, as well as lawsuits filed by people who claimed they were victims of sexual abuse by Kelly.

Brown worked for Kelly from 1997 to 2018, and prosecutors allege that he, Kelly and McDavid conspired to receive multiple alleged child pornography tapes.

"At all times relevant to the charges in this case, Derrel McDavid did only one thing: he did his job," said McDavid's attorney Beau Brindley. "It was his job to protect Robert Kelly's image and his career. To do that, he hired some of the best lawyers in the United States. Those are the only people with whom Mr. McDavid entered into any agreements relevant to this case. Mr. McDavid and these lawyers did their job. They executed it with excellence. That was not a crime then. It is not a crime now. We look forward to Mr. McDavid's exoneration."

CNN has also reached out to Brown's attorney for comment.